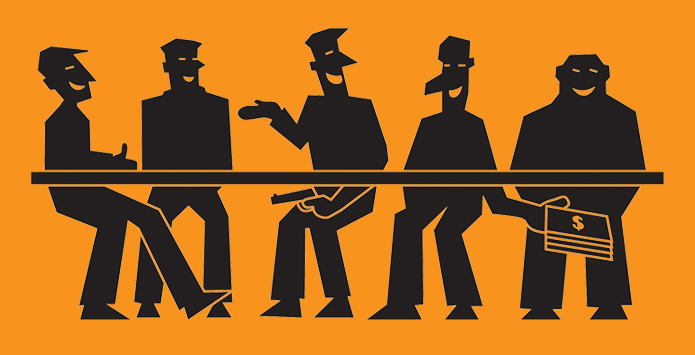 The lobby of the Hilton hotel in Addis Ababa, characterised on any given day by the incessant buzz of caffeine- and alcohol-fuelled chatter between local politicians, foreign contractors, aid workers, fixers, soldiers and sex workers, is a grand bazaar for the powerful. This is where relationships are brokered and important decisions made—in plain view, but far from the popularly elected assemblies. Until a few years ago the lobby featured a large display of a vast new private middle-income housing development for Addis. It has been suggested that the developers are closely linked to Ethiopia’s political elite and the personal fortune of its former first lady, Azeb Mesfin, a wealthy businesswoman who seemingly benefitted from the patronage of her husband Meles Zenawi’s authoritarian rule.

The detrimental impact of corruption involving elites and the vast sums of money involved is well documented. However, it is too seldom the focus of discussions on urban governance in Africa. While many national economies are heavily reliant on extractive resources such as minerals, oil and gas, this will inevitably change over the next few decades as resources are depleted and economies—by necessity and design—slowly diversify. Most of the new sources of economic growth will be rooted in emerging African megacities, a kind of Eldorado that offers a source of new taxation and potential alternate prosperity for rent-seekers and corrupt elites. As bureaucratic entities, many cities have the capacity to tax and spend, wielding large budgets. Public procurement is an area particularly vulnerable to corruption, even more so at local government level, particularly given the risks of limited public oversight capacity over decentralised spending. Add to this the fact that most city administrations, with very limited internal capacity, will continue to rely on public-private partnerships and contractual relationships with the private sector to deliver services and extend public infrastructure.

This is likely to lead to ballooning budgets. To understand the size thereof, the combined annual budget of Cape Town, Johannesburg, Nairobi and Lagos was estimated to be US$11,2 billion in 2012, a sum that outstrips the annual spending power of many smaller African states. City treasuries, with growing tax bases and disbursements from central government keen to keep urban populations in check and off the streets, will prove attractive bait to grafters who engage in grand corruption.

This scenario is further complicated by the fact that currently 32 of the 50 largest cities in Africa are political capitals or centres. This means that tight networks of political and economic elites, some of whom collude in criminal enterprise, are geographically located in these burgeoning metropolises. Cities that show potential as economic engines will be vulnerable to capture by corrupt groups. However, in much of the literature the focus of corruption within cities is removed from the political corruption of “city halls” and concentrates on the manner in which residents are forced to pay petty bribes. While the payment of bribes for inclusion on city housing lists or water connections is important, far more compelling in the long run is who builds the houses and supplies the city’s water. Should we wish to challenge the systemic nature of corruption at national or city level, the focus must shift from the small change to the power networks which generally derive the most profit from what should be the “public good”.

Governance of urban areas will be a hugely contested space. At one end of the spectrum, corrupt elite networks will pose a threat, while at the other end, the rapidly expanding size of cities—populations are set to triple by 2050—will leave city governments hard pressed to ensure that they can service residents’ needs. When things start to fail systemically we will see the state retreat, weakening its legitimacy, allowing new actors to fill this vacuum. In Lagos, Nairobi and Cape Town the presence of organised criminal groups and gangs is well documented; they are not only the source of social instability and crime but also offer limited social services. It is not true to suggest that there is a clear dividing line between the governance of wealthy suburbs and poor ghettos. Very often wealthy political elites draw on the services of gangs during elections and their networks when they need to settle extra-judicial “scores” or engage in business arrangements to smuggle commodities. While such dysfunctional governance “works”, it always errs towards rewarding the powerful at the expense of the poor.

A crucial element of this relationship is the security services and their role in the relationship between criminally-inclined political and economic elites in city hall and criminal networks that monopolise power around the “community hall” in marginalised communities—the outlawed Mungiki sect in Nairobi and the gangs on the Cape Flats are both examples of the latter. What is clear is that most so-called organised crime syndicates involve collusion, often with direct participation by elements of the security services and police in particular. This disturbing phenomenon has become the norm. However, while the police have generally focused on their engagement with criminal enterprises, their involvement in corruption within city hall has been limited.

At a state or national level, politicians tend to build alliances with criminal elements within state-sanctioned paramilitaries and intelligence agencies. South Africa, with its relatively large and well funded domestic intelligence agency, is an example of how collusion between corrupt intelligence operatives, businesspeople and politicians have given rise to a so-called “shadow state”. The attraction of growing budgets at megacity level is likely to not only pique the interest of corrupt senior politicians but of their partners within intelligence services as well. The potential of this “shadow state” to be increasingly drawn into contests for economic power at the city level is worrying as there is no doubt that ordinary folks will be caught in the crossfire.

It is not far fetched to suggest that the problems nation states are experiencing with political corruption has the potential to bleed directly into aspects of urban governance in emerging African megacities. As sources of growing populations and economic growth, coupled with their close proximity to the seat of political and economic power, they will be of increasing interest to criminal elites. Their activities at present go largely unchecked by weak state institutions, a fact which is unlikely to change in the near future. Cities, if they want to prosper, must come to mirror societies that are governed in a manner which is fair and always favours the vulnerable. It is therefore crucial that powerful criminal networks that extend to the stock exchange and state house become a focus of citizens concerned with future governance of Africa’s cities *

Hennie van Vuuren is a fellow at the Open Society Foundation for South Africa working on corruption issues. He writes in his personal capacity. See www.opensecrets.org.za or follow @penSecretsZA