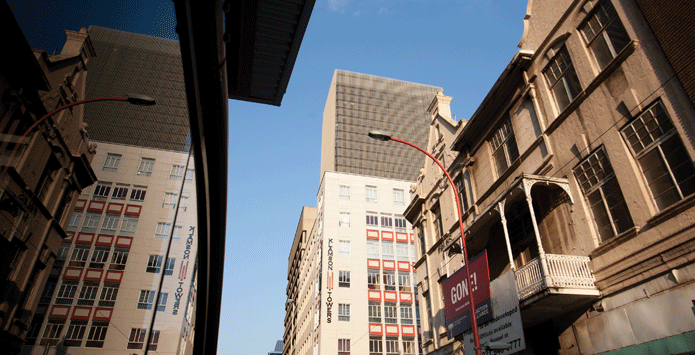 The tagline “world-class African city” was first invoked more than a decade ago to describe Johannesburg and its future aspirations. But what does this phrase actually mean? And why has it proven so durable in the city’s official planning discourse?

Everything has changed.” Jan Erasmus ratchets up the tempo as he strides back into his second-floor office of the City of Johannesburg’s Metropolitan Centre, the brown monolith that dominates the Braamfontein skyline. The nested issues that characterise South Africa’s largest metropolis, which brands itself a world-class African city, are managed from within its intimidating corridors. At the heart of this administrative hothouse is a think-tank, the Central Strategy Unit (CSU). And Erasmus, its deputy director of policy and strategy, is key.

He has just returned flush from an urgent summons by the city manager, Trevor Fowler. It seems Moody’s Investors Service has Johannesburg under its annual spotlight for a ratings review. Erasmus holds in his hand a long list of questions about organisation, strategy and local economic development in the city. This morning’s congenial agenda to review African economic policy for the city is thus promptly skewered. He turns to his two colleagues to divvy up the new workload. The banter among the trio flows around a circular table between cluster plans, King reports and linear markets. Stephen Narsoo, a CSU policy and strategy specialist, declares the shared office mantra on his shirt pocket: Urban. “How much time do we have?” he asks. “One hour,” comes the reply.

Gee vir my die goed met political spin.” He rings off to sift voluminous reports, a large South African flag hanging next to his desk.

Narsoo and his counterpart, Zayd Ebrahim, are bunkered down in their nearby office. The double doors are masked with white paper. A blank flipsheet perched at the ready. Behind Ebrahim’s head is a thought-chart with keywords like “we-think” adjacent a neatly stacked row of highlighters pressed to the wall and a series of handwritten notes. “Part of our job entails that ad hoc component,” says Ebrahim, unruffled by the turn of events. “It’s our responsibility to be on top of things, evaluate and respond … It’s accepted as the way the City functions and one of the most interesting parts of the job. The city manager and mayor [Parks Tau] rely on us for that information.” It seems colleagues do too; they regularly pop into CSU offices for various reports.

Joburg 2040, a growth and development strategy (GDS) that recasts the 2006 city vision to four key outcomes and includes the following vision statement: “Johannesburg—a World Class African City of the Future—a vibrant, equitable African city, strengthened through its diversity; a city that provides real quality of life; a city that provides sustainability for all its citizens; a resilient and adaptive society.”

A world-class African city—what does it mean? “World-class is a very deceptive word,” says Ebrahim, after meeting his Moody’s deadline. “It [infers] you are benchmarking against a European or western city, and you assume—well, they’ve got transport and world-class there means world-class here. It’s not the same. But then you end up debating and you can’t really get consensus. World-class African and African world class are very different things and you can debate African cities at length. I suppose we’ve accepted it as the brand of Joburg.”

Kim Gurney is a writer, artist and researcher based in Cape Town