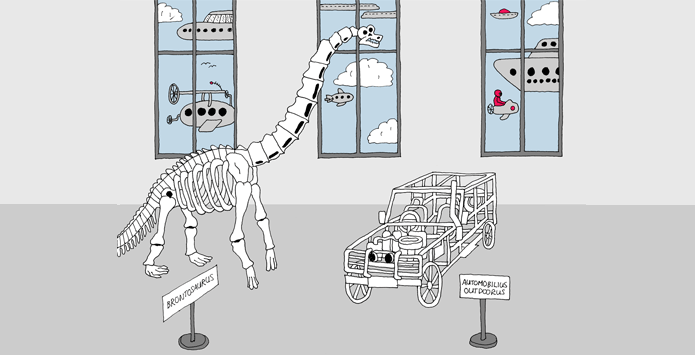 An End to Big Oil?

The current steel-and-petroleum car system cannot endure, with a number of different scenarios looming on the immediate horizon

In the first decades of this century there are many indicators of car decline in the west. There has been the spectacular collapse of some American iconic car firms that defined the mobile twentieth century. The US city experiencing most rapid population and economic decline is Detroit, the world’s pre-eminent car city. The global supplies of oil are running down with one new barrel discovered for every four used. The US has recorded the first drops in car mileage for a generation or so; new cohorts of young Americans or Europeans desire the latest smartphone rather than a car. In their 2010 study of peak travel, Adam Millard-Ball and Lee Schipper of Stanford University conclude that travel activity has reached a plateau in various countries of the west. Some societies have reached or are even passing peak travel.

And the worldwide growth of population of some billions makes it impossible for the oil-based car system to be available on even a European scale around the world, and especially across Asia. Since around 2005 there has been a major shift in global politics towards searching for low carbon energy and forms of transport with much experimentation seeking to move away from a high carbon world. There are a number of very different alternative scenarios for the middle of this century when the steel-and-petroleum car system that we have come to know and love may be no more.

First, the effects of especially the politics of climate change, the peaking of oil supplies and periodic economic crises could generate local sustainability. Travel is substantially reduced and far more local. There may be some cars around but their monopolisation of roads will have long passed. Global population will be smaller through worsening health care and reduced food supplies and urban centres will have fragmented. There would be a global shift towards lifestyles and forms of movement that are more local, smaller in scale and less energy using. Friends would be chosen from neighbouring streets, families would not move away at times of new households, work would be found nearby, education would be sought in local schools and colleges, the seasons would determine which foodstuffs are consumed, and most goods and services would be simpler and produced nearby. Global GDP will be smaller but wellbeing may be higher for those who are part of this “small is beautiful” localisation of the future.

A second alternative, a bleaker version of the first, can be termed “regional warlordism”. In this barbaric future there are oil, gas and water shortages and intermittent resource wars within the context of extreme weather events and energy shortages. There is the breakdown of many mobility, energy and communication connections that now straddle the world. There would be a plummeting standard of living, a re-localising of movement, an increasing emphasis upon local warlords controlling recycled forms of mobility and weaponry, and relatively weak governments. Infrastructures would collapse and there would be increasing separation between different regions. Cars and trucks, and buses and trains would rust away in the deserts or be washed away in floods. Often regions would be at war with their neighbours, especially for control of water, oil and gas, as prefigured in Mad Max 2’s portrayal of the barbarisation of the future.

A third alternative is hyper-mobility. The current patterns of mobile lives based on new communications and transportation develop on an extreme scale. The resource shortages and effects of climate change turn out to be less significant at least for the rich north of the globe, partly because a magic bullet overcomes the limits of fossil fuels and provide a new mobility future. People’s movement gets more extensive and frequent with novel fuels and vehicles. Personalised air travel, Sao Paulo writ large, would be common, as unfashionable cars would remain stuck on the ground. A Le Corbusier-inspired future beckons all to the skies, including regular flights into space with Virgin Galactic! The final frontier is indeed overcome with a verticalisation of cities.

Finally, there is a post-car electric future. The digital and the transportational are integrated together. Here software intelligently works out the best means of doing tasks, whether this involves meeting up or getting to some place or event, or simply staying put. Some effects of meeting up would be effectively simulated through virtual communications that are as good as meeting face-to-face. Digital lives would develop into life instead, so much so that there would be less need for travel, especially over long distances. Much business, social and family life would not be face-to-face. 3D printing could enable manufacturing on demand and the replacement of the long supply chains of container-based manufacturing systems.

Personal travel would involve small, ultra-light, smart, probably battery-based “vehicles” that would be hired, a bit like the hiring of bikes now in London, Paris or Barcelona. Streets would be full of often speed-controlled micro-cars, demand responsive mini-buses, bikes, electric bikes, hybrid vehicles, driverless rapid transit systems and pedestrians. Ideally these would be seamlessly integrated together with larger-scale public transport. Smartphones or their successors would control access and payment for multiple and interconnected forms of mobility. Neighbourhoods would be reengineered to constrain sprawl. Carbon allowances would be allocated, monitored and individually measured through new apps. There would be less freedom to walk, drive or move without traces being left and some payment extracted. Such a digital system is like an Orwellian airport city and would need to be subject to energetic democratic control.

So there are four futures and all have their costs, dangers and injustices. None is simply preferable, none is obviously the most likely to develop and all may be contested. And the best is not necessarily that which will develop. How might the last of these be realised?

Certainly the combination of high oil prices, extreme weather events, and stagnating economic growth indicate some green shoots of a powering down of fast oil-based travel within parts of the rich north. After the Car (2009), the book I wrote together with Kingsley Dennis, details the importance of innovation taking place around the world. The beginning of this century is like the beginning of the last century when the car system was being assembled out of many inventions, discoveries, tinkerings and new marketing. Something similar is taking place today and a whole new socio-technical system may emerge out of very disparate elements, of technologies, materials, policies, payment systems and social practices, that are like islands of an archipelago which may turn out to be components of a new system.

Central here would be some shift from an ownership to an access economy, as Jeremy Rifkin has long advocated. It is also something much trialled with car clubs and new car hire schemes. Carmakers are experimenting with pay-as-you-go schemes for electric vehicles (EVs). Daimler, Peugeot and others expect these to attract younger customers familiar with access payments for internet services. Better Place will charge by the mile; indeed if the EV is highly subsidised or even free (and then effectively recycled) payments would just be by distance. Central would be near field communications to enable the supply of interchangeable mobility services to be accessed, paid for but not predominantly owned.

By the middle of this century a post-car system could emerge unexpectedly, off-centre, not from a current home of the car. Examples here could be electric bike innovation in China, Better Place EV battery replacement system in Israel, public transport integrated systems in Brazil, the Bay Area becoming the EV capital of the US, Chinese officials making China the world’s largest producer of EVs and setting up recharging throughout Wuhan and so on. Frank W. Geels, René Kemp, Geoff Dudley and Glenn Lyons document in Automobility in Transition (2011) the many small cracks in the current automobility system and the array of niche developments occurring which may at some stage become assembled together in order to realise an EV socio-technical system.

But there are formidable technological, economic, organisations and social problems in engineering this system to push into the side the steel-and-petroleum car system. It is necessary that EVs, whether four, three or two wheels, come to be a socio-technical system that over time makes obsolete the steel-and-petroleum system, and is not merely providing extra vehicles for eco-prestige seekers. Also significant here would be preventing the rebound effect, of fun and fashionable EVs being so over utilised that extra mileage occurs. And this says nothing about how the electricity is itself generated: while EVs are up to four times as efficient as petrol-driven vehicles, the use of coal as the most common fuel for generating electricity is a major concern here.

During the twentieth century it seemed that oil-based mobile lives would spread to all continents and most peoples, albeit with huge inequalities. That century operated as though there was a free lunch to be enjoyed at the expense of the next century, with half the world’s oil being burnt that resulted in changing global climates. Now that we are in that next century we find our futures are not at all rosy, that the car and its high carbon friends have left little standing in its wake.

By the end of this century the steel-and-petroleum car system that we have come to know and love will be no more. If there are cars, they will be mainly housed in museums, if museums still exist. Cars—one to two ton monsters powered by refined oil, built of steel, privately owned, seating at least 4 people, and with their own territory called roads and car parks—will be seen as dinosaurs, remnants of the twentieth century. People may gawp at them a little like tourists on the streets of Havana now gawp at the decaying 1950s American cars. Cars will be so last century. The car system will not be around by the end of this century. But none of the alternatives to this are without major costs and risks. Much indeed is up for grabs.

John Urry is a distinguished professor of sociology at the University of Lancanshire. This article first appeared in the publication accompanying the LSE Cities conference Electric Cities, published in December 2012