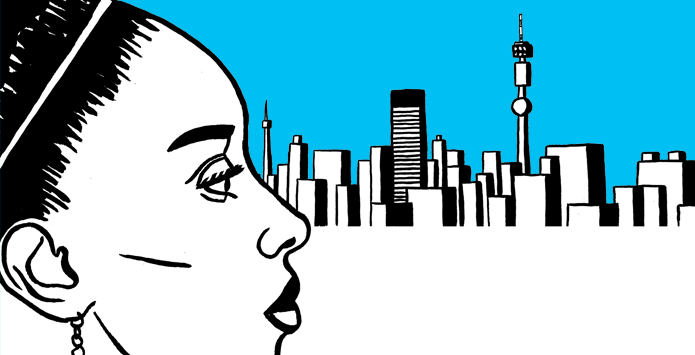 Beat Down But Not Defeated

For Johannesburg’s many migrant women everyday life in the city is about mediating, melding and juggling the formal codes and unwritten street laws

I was done tarmacking. It was 1994 and I had been on Nairobi’s streets for more than a year in search of a job or business opportunity, something that would put my 7-6-3 years of primary-secondary-tertiary education to use—with no luck. Nothing. Not even a regret letter from one of the 35 job interviews I had done. On 5 August 1994, with little more than an address, I boarded a plane bound for Johannesburg. Back then Jan Smuts International Airport was still manned by burly Afrikaans-speaking immigration officers. One of them stamped me into the country on a two-week holiday visa. That was my official story. In reality, I was in South Africa in search of a livelihood and a future I could be proud of. Twenty years and three airport name changes later, I am still in Johannesburg.

In many ways my new book, Migrant Women of Johannesburg: Everyday Life in an In-between City (Palgrave Macmillan/Wits University Press), bears echoes of my own journey to South Africa from Kenya. The book follows the lives of various women from Rwanda, Cameroon, the Democratic Republic of Congo, Tanzania, Uganda, Kenya, Congo Brazzaville, Nigeria, Zimbabwe and Burundi, who now live in Johannesburg. Drawing on their stories of love, illness, fear, children, violence, family and money, the book explores these women’s relationships with their host and home communities. It unavoidably includes thoughts on the South African state, economy and the country’s largest city, Johannesburg.

Some social scientists will tell you that their first major work was “kind of” autobiographical, that it was on a subject that they could own, knew something about and felt confident in telling the story. But a researcher’s close biographical proximity to written work does raise questions around its “truth”, its capacity to reveal what is really going on, unencumbered by personal feelings and experiences. Is it good social science if the author is so close to the subject matter? How “objective” is the research if the author forms personal bonds with her informants? How useful is the work in providing “scientific” insights?

These were the questions I faced as I embarked on what would be a nine-year PhD and then book project. If anything, my proximity served as an advantage. I had relatively easy access to migrant communities and a personal interest in the subject matter that sustained me through the often-laborious and demanding process of academic writing. But for positivists, my closeness posed a methodological danger to “objectivity”. Happily, social science seems to have moved on, and the objective veil-like the Emperor’s nakedness—has been unmasked. By “coming clean” about our positionality and our relationship to the research, we realise that objectivity is a fiction. No matter how “distant” a researcher is from the subject matter s/he can never be totally unbiased. Indeed, all research is in some way coloured by our experiences and influenced by who we are and where we come from. But, no matter how comforting the scientific “endorsement” was, the nine-year journey was filled with moments of doubt intermingled with bursts of confidence—confidence that there was a story in the hustle of markets, shrieks of laughter in hair salons and tears by hospital beds. A story that continues to shape Johannesburg.

Foremost, Migrant Women of Johannesburg is about urban life. It is about how women like Fazila from the Democratic Republic of Congo, Sibongile from Zimbabwe, and Rosine from Burundi shape Johannesburg’s politics, regulatory systems and local economies. When Sibongile comes home from work to find her Hillbrow flat turned upside down and her sister, the victim of domestic violence, in hospital she makes a conscious decision not to go to the police. Her sister’s boyfriend is Zimbabwean and reporting him to the authorities would mean bringing unwanted attention to the community, which she relies on in times of difficulty. She negotiates with the elders in her community that she will not “rat” on the perpetrator and they will reprimand him and keep him away from her family. Much of everyday life in the city is about mediating, melding and juggling “street laws” and the laws of the state. And it’s not just ordinary urban residents negotiating the different spheres of urban regulation. Local councillors, state authorities and policy makers are working it too. I saw this when I met Hannah, a Malawian street trader whose goods are routinely confiscated by the metro police because she hawks her goods illegally on Klein Street. A long charade ensued as the officer painstakingly wrote out a notice for Hannah to appear in court. Both Hannah and the officer knew it was a charade: no last names were exchanged, no real addresses given nor identification numbers requested that would lead back to Hannah. As I discovered, Hannah and the officer are involved in a reciprocal relationship: money and goods are exchanged between; the street tax forms part of an unwritten deal between police and traders that keeps Hannah trading on the street.

To an outsider life in the city may seem unintelligible, insecure and chaotic, yet beneath the surface is a complex labyrinth of moral codes and obligations that govern urban relationships. Migrant women allow us to see how populations living on society’s margins influence urban practices. The lives of Sibongile, Hannah and the other women I profile demonstrate to us how significant they are in shaping the actions of state agents, and overturning common understandings of urban governance as a state-led project. As we follow them through the city’s streets, the boundaries between legality and illegality, formal and informal, official and unofficial city collapse—rendering these categories inaccurate descriptors of the city or their lives.

At a café in Johannesburg’s CBD one late afternoon Ayo, a Nigerian woman, said to me: “There is a certain—what do you say?—indeflatability—is that a word?—of the spirit. You can beat a woman down and down, but there is always one eye that is roaming like a periscope even when she is down, looking for the next opportunity. That one eye, you can never destroy. This is one lesson Johannesburg, the city, never forgets”.

Caroline Wanjiku Kihato is a writer and urban specialist based in Johannesburg. She is currently a visiting senior researcher at the University of the Witwatersrand’s School of Architecture and Planning