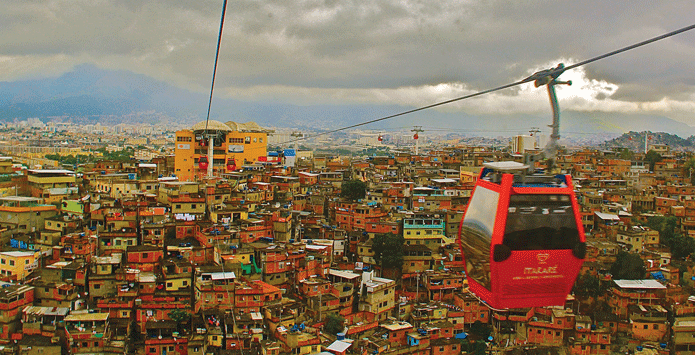 In 2014 Brazil will host the FIFA World Cup, followed, two years later, by the Summer Olympics in the prosperous Atlantic port city of Rio de Janeiro. It will become only the third country, following Mexico and the United States, to host these two mega-events back-to-back. As the clock ticks down on these events, Rio is fast-tracking urban projects aimed at reversing decades of policy-driven division—between rich and poor, formal and informal, state and sub-power—that have earned the “marvellous city” (Cidade Maravilhosa), as it is affectionately known, the dubious nickname of “divided city” (Cidade Partida).

The latter epithet derives from the title of a non-fiction book by journalist Zuenir Ventura. Published in 1994, Ventura’s award-winning piece of reportage drew on his experiences living amongst Rio’s impoverished North Zone residents for ten months. It described a state of social apartheid that Rio’s municipal governors are only now concertedly addressing. Using billions of dollars in public money and some of the most advanced urban management technologies on the planet, Rio is currently the site of a vast “integration experiment” that aims to reconnect the city, in particular its many disenfranchised citizens.

Ten highly visible integration projects—ranging from a panoramic elevator in Ipanema Beach and state-subsidized 3D movie theatre in Rio’s largest favela to the use of smart technologies to monitor urban life in real time—demonstrate what this city of spectacle wants to showcase, and also what it wants to hide. These projects serve as reference points for a timely discussion on the extent to which Rio’s political leaders are effecting real change. Is all the heightened focus on urban integration simply about appearances as the city prepares for its imminent arrival in the global spotlight?

The most visible integration project is Rio’s Pacification Program. Known by the acronym UPP, the initiative aims to retake favelas that are currently under control of drug traffickers or militias (factions of off-duty and former policemen). Pacified favelas receive newly trained UPP police units who work “from the perspective of attending [to] the citizen—no longer combating the enemy, but instead protecting society,” as security ministry official Juliana Barroso told the Christian Science Monitor. This is no small task: Rio police kill one civilian for every 22 they imprison; on average, three people die at the hands the police every day. Jose Beltrame, Rio’s well-respected public security secretary, heads up the multi-year state initiative that has retaken 30 of Rio’s favelas since 2008, mostly in the North Zone, with plans to pacify close to 100 more by 2016. (The famed City of God favela, in the city’s West Zone, was the second to be pacified).

Almost one-third of Rio’s six million inhabitants live in favelas. Drug traffickers control about 40% of Rio’s 1,000 favelas, with an equal amount controlled by militia forces; the remainder are free of extrajudicial control. Beltrame told Epoca Magazine last year that militias, who researchers say are in the ascendency, worry him more than traffickers. Despite all this, UPP has left militia-controlled favelas largely untouched. Only one pacified favela was previously under militia control; the rest have been retaken from traffickers. Militias are a particular problem in Rio’s West Zone, the fastest-growing part of the city and destination for thousands of families facing removal as the city implements its Olympic infrastructure projects.

Complexo de Alemão, in the city’s North Zone, is Rio’s largest favela. It underwent pacification in 2010 in a multi-phase operation that took two years and involved thousands of elite police forces and federal troops. “Before the UPP we lived in uncertainty,” said David Amen, a co-founder of civil society organisation Raizes em Movimento (Roots in Movement). The organisation is based in the Ramos neighbourhood of Alemão and organises cultural events like photography classes and workshops for small business entrepreneurs. “We didn’t know: Is this a shooting? Is this an invasion? Are the police coming in? I’d have no idea what was going to happen each day.”

Despite solid progress and international praise, Beltrame told Epoca that his pacification programme “hasn’t won the game yet”. He stated: “The biggest complaints today in pacified communities are about construction projects, sewage, schools and health centres.” Beltrame has said it would be reckless to promise that pacification will end the drug trade—he supports discussion around legalising marijuana. “I’m not going to promise that everything’s going to be okay,” he said. “But I think that Rio effectively has the chance to turn a page, because we’re reaching the neuralgic point of integrating the favela and the asphalt.”

Rio’s Complexo do Alemão—or German Complex as it is nicknamed by locals—made local and international headlines in 2012 for two seemingly unrelated reasons: the start of a high-profile and ongoing pacification operation, and the inauguration of a state-of-the-art air gondola. A headline in O Globo, a prominent Brazilian newspaper based in Rio, elegantly summarized the contradiction: “Pacified, the German Complex Will Now Have Sightseeing Tours.” News reports would have you believe that the fate of Alemão hinges on the state’s success (or failure) to keep the drug traffickers from retaking control. According to David Amen, a resident of Alemão, “the trafficker is not the only villain in our story, and drug trafficking is not the only problem in our favelas”.

Alemão is statistically the poorest neighbourhood in Rio: the average per capita income is in the lowest percentile in Rio; it has the largest percentage of residents (29.2%) living below the poverty line; and one-third of residents earn less than half the minimum wage (about $150 p/month). A third of Alemão’s residents have no legal title to their homes, and motorised access to homes on steep hills is also a widespread problem. Basic sanitation and trash collection are absent in large parts of the complex. Primary health is also an issue: in 2009 a local Doctors Without Borders emergency clinic closed its doors, leaving Alemão’s almost 200,000 residents without ready access to an emergency room.

In the face of pressing community needs, the city recently dedicated over $400-million to infrastructure upgrades and social assistance programmes in Alemão. A large proportion of this federal money was however spent on an elevated cable car system, or air gondola. “The number one priority in Alemão is sanitation,” said Alan Brum, co-founder and director of local non-profit Raizes em Movimento, at a public hearing last April. “Imagine a cable car. Just in terms of federal and state money, $362-million has already spent, and we still don’t have basic sanitation for all of Alemão’s residents.” Representatives from the federally funded Growth Acceleration Programme (PAC) promised to complete projects focused on basic sanitation, habitation improvements, street widening and traffic signals, but so far only the cable car has been built to completion.

Inaugurated in 2011, the Medellin-inspired cable car system stretches 2.9km across six stations in Alemão and is free to residents. Despite capacity for 30,000 riders per day, many of the gondolas were empty on a recent Friday afternoon when I sat in my own dedicated car to photograph the system. A legal services centre at one of the stations, inaugurated by President Dilma Rousseff in 2012, has yet to open for business. Local residents told me the cable car (or teleférico) is “for tourists.” David Amen, of Raizes em Movimento, referred to it as a “Trojan Horse.” 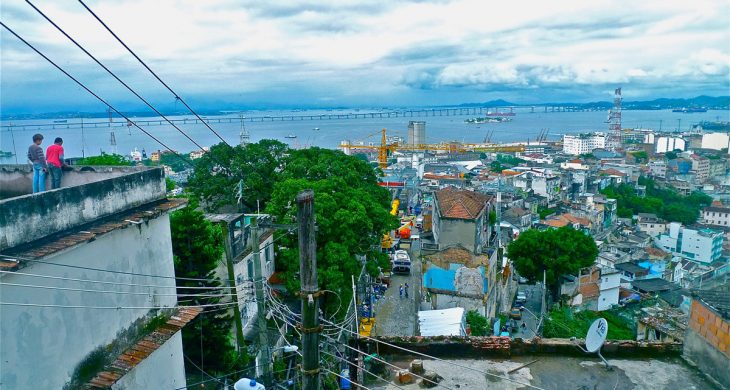 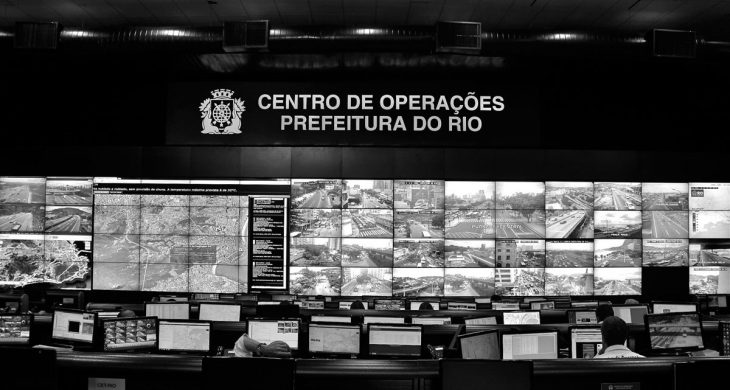 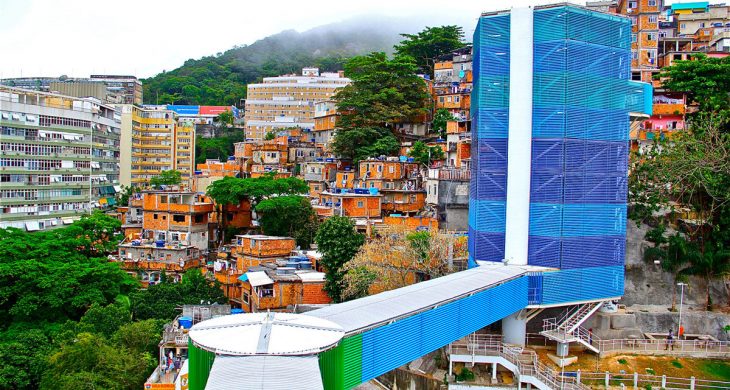 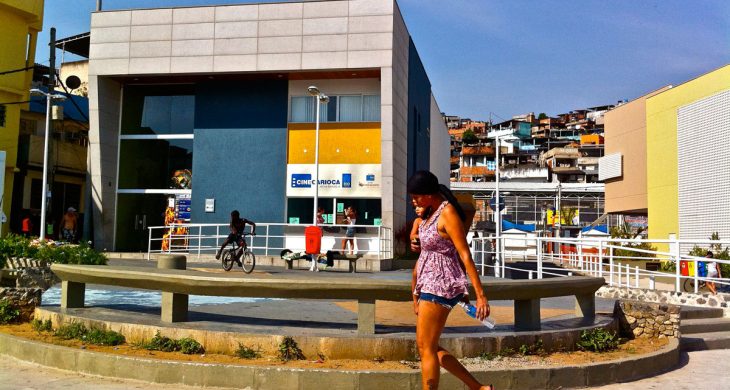 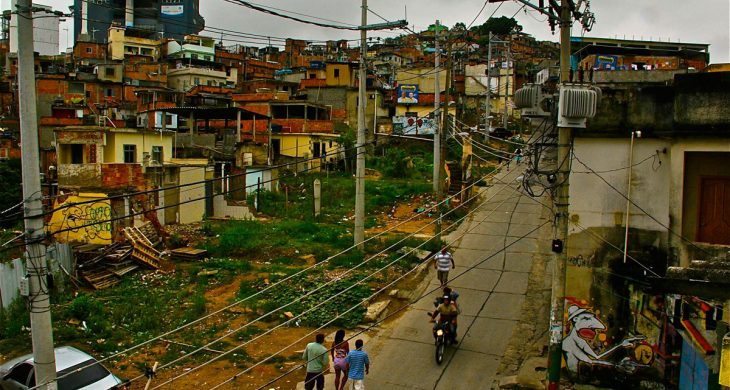 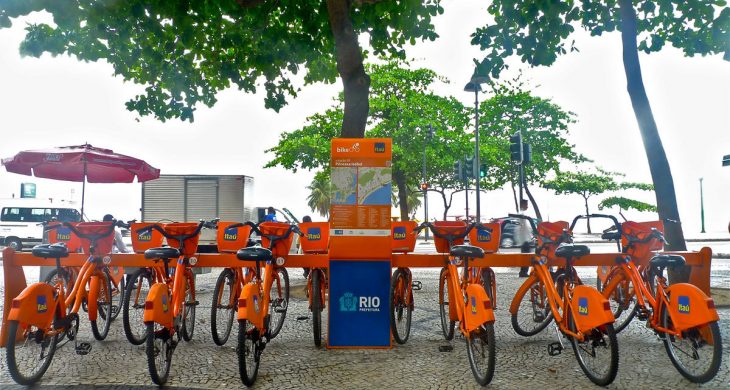