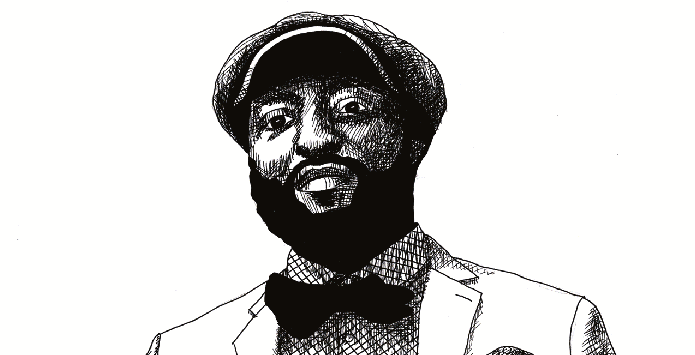 In 1997, Bonaventure Soh Bejeng Ndikung, a bearded Cameroonian biotechnologist with a snappy dress sense and worldly outlook, moved to Berlin. A decade later, long stays in France and England done with, he began dabbling in exhibition making. Not long afterwards, he opened up SAVVY Contemporary in Neukölln, a working class neighbourhood home to hipsters and Turkish migrants. It soon became a hub for not only exhibiting, but also carousing and the kind of freeform thinking sponsored by the art world. Now, after slowly establishing a name for SAVVY in Berlin’s congested art scene, Ndikung has moved into a large 400m² space retrofitted by architect Henning Wiethaus. Ndikung explains how he came to be.

Cityscapes: The first time we met you, at the Haus der Kulturen der Welt in Berlin, you presented a short talk on Anton Wilhelm Amo (1703-59), the first African to attend a European university. Can you talk about your interest in Amo?

Bonaventure Ndikung: Like Amo, I am an African, also living in Germany—but unlike Amo I came here as a free man. I stumbled on Amo during research, I was looking for people of African origin who had made a case in writing, or otherwise, definitely intellectually, on issues like slavery and the rights of man. I had read the African abolitionist Olaudah Equiano’s 1789 biography, The Interesting Narrative of the Life of Olaudah Equiano, which incited a kind of storm in me. I was knocked out when I learnt about this guy. He is never talked about in Germany and hardly ever appears in any philosophy books, despite publishing some remarkable pieces, like his 1729 dissertation, The Rights of Moors in Europe, written in Latin (De iure Maurorum in Europa). It was nowhere to be found when I searched it out. “Verschollen” I was told, disappeared.

My research revealed that Amo, being a formidable legal theorist, was trying to make the point that Africans could/should not be treated as slaves, since African kings were in legal treaty with the Roman Emperor, their subjects were also protected by Roman law. His Treatise on the Art of Philosophising Soberly and Accurately was an important milestone: it briefly shaped the trajectory of thought in this country, but was later ignored. He wrote before Kant and Hegel. The guy is no unimportant fellow.

I speak about him because I am not prepared to sit down and watch how his voice is drowned in a sea of historical falsification—epistemicide, as Bonaventura de Sousa Santos describes the unilateral definition and delimitation of meaning by colonisers in colonised societies. Whenever I have the chance I talk about him. Silence is not an option. In a letter to Angela Davis, James Baldwin wrote: “we live in an age in which silence is not only criminal but suicidal.”

CS: You trained as a food biotechnologist and did a PhD in medical biotechnology. How did your interest in art come about?

BN: I cannot really say; it’s just always been there. I am interested in both the arts and sciences. As you know, until the 19th century, being a scientist, artist and philosopher, at once, was nothing strange. Industrialisation and the division of labour forced people to choose and specialise. My interest in art probably came through literature. I was fortunate to grow up surrounded by a lot of books. Only very few art books, but lots of critical writings and political stuff by Jomo Kenyatta, Kwame Nkrumah, Franz Fanon, W.E.B. Du Bois, the African Writers Series. It was my inlet to exhibition making, or curating as it is called in the art world.

CS: When did you decide to translate that interest into your gallery project, SAVVY Contemporary?

BN: I had been independently curating for a while in other spaces, but it always took a lot of convincing. The critical issues I wanted to engage with were, more or less, lacking. Despite many good exhibitions, there was little or no reflection on post-colonial issues —it was a barren territory in Berlin. In 2009 I opened the gallery, SAVVY Contemporary, followed later by SAVVY Journal, a journal for critical texts on contemporary African art.

CS: How would you characterise the early programming of the space?

BN: Ambitious, but still very humble—and mantled with a lot of good intentions. We kicked off saying we wanted to do a publication for each exhibition we put on, not knowing how to pay writers or printing costs. Artists like Soavina Ramaroson from Paris had to cover their costs getting here. Yingmei Duan, a Chinese performance artist who has worked with filmmaker and artist Christoph Schlingensief, was our first resident artist. She had to deal with staying in the gallery space and performing daily. Basically lots of improvisation. It required finding good themes for exhibitions that touched the nerve of time, and identifying curators and artists that shared my belief of not prostrating before the Berlin art scene and its western habits. The challenge was to create a programme that was more than just a reaction to a certain status quo. The gallery is a pacesetter that brings to visibility certain discourses.

CS: The gallery, in its old space, struck me as a social space as much as a formal gallery. It hosted dinners, for instance, where the food, not the art was discussed. To what extent was it your intention for SAVVY Contemporary to become a place where African expatriates, children of the African diaspora and Africa-interested people can meet and converse? Did you have any existing models you drew from when you created the space?

BN: I wouldn’t really say I had arithmetically planned it to be that way. And honestly I had no real existing model as inspiration. It all came about through necessity. You know how we do it back home. If somebody visits you or your city, you invite them home, break and share kola nuts, and discuss or plan issues. I discovered that it was exactly this social engagement that was lacking in my circles in Berlin. So, two or three times a year, when people are around, I invite them to the gallery for a meal and to network. It has become a meeting point for many in the African diaspora, but for friends or acquaintances from China or Ireland, Brazil or Canada. While breaking bread and listening to music is important, I also see them as a serious think tank.

CS: While SAVVY aims to showcase art from the African continent, it is based in a specific locale. How has SAVVY been received by locals, especially in the art scene?

BN: We—gallery manager Saskia Köbschall and my other 11 colleagues from seven different countries—are aware of the specificity of the locale. That is why we try to highlight the dialogue between the west and the non-west as the crux of what we do. We are not only interested in the 276 years of Bohemian history in the district we are in, but also in the architecture history of the place where architects like Bruno Taut or Hans Heinrich Müller produced work in the early twentieth century. But you cannot talk of Africa today without thinking of the Berlin-Congo Conference, held in Berlin in 1884. We showcase production from beyond Europe and within Europe, and reflect on the various crossroads, points of intersection, common denominators, framed within artistic, philosophical, geographical and scientific discourses