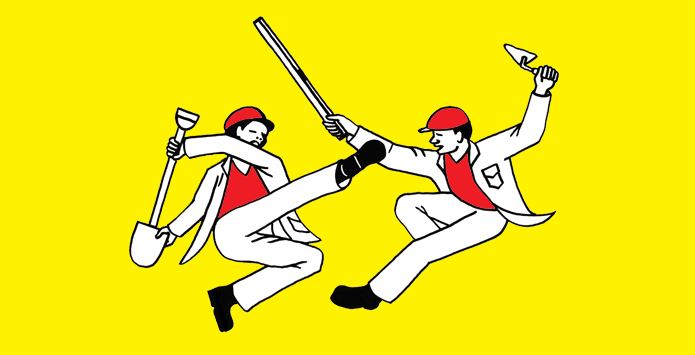 A lot has been said recently about Chinese urbanism in Africa. The Dutch research studio Go West Project has produced striking imagery of the Chinese presence in urban Africa, providing the content for the entire edition of Shanghai-based periodical Urban China, devoted to “Chinese Urbanism in Africa”. Lily Kou used the images in her provocative contribution to Quartz Africa, a US-owned online news outlet focused on African innovation. The article was headlined, “Africa’s cities are starting to look eerily like Chinese ones”.

The point is well made: the Chinese presence and investment in African is having a formidable impact in cities on the continent. We do not contest this but we do question whether this represents a distinctively Chinese urbanism in Africa. Is it in fact true that Africa’s cities look eerily like Chinese ones? Or, are these contributions feeding into the well-established trope in the west—and also reproduced in postcolonial societies in Africa—of the invading Chinese hordes, the yellow peril? Before approaching this question, however, we must ask what “Chinese urbanism” actually means.

The idea of Chinese urbanism is obviously a complex one. The urban in China is hugely differentiated with temporal layering over centuries, even millennia, and also considerable variation across China’s large territory. However, the greater part of China’s urbanisation has occurred in an extremely short period, historically speaking. Since around 1980, and especially after 1990, there have been common features in urban development in China that may allow us to speak legitimately of a “contemporary Chinese urbanism”.

In this period there has been mass-scale redevelopment of existing cities, and the construction of new cities. Traditional urban forms, and also the fine-grained urban texture of Maoist workplace urbanism, have been replaced with massive superblocks of (often gated) high-rise development. Take the bullet train from Shanghai to Beijing (approximately the distance from Johannesburg to Cape Town) and you will see superblock development along almost the entire route, in cities and towns of all sizes, and even in the countryside where entire villages have been replaced with apartment towers.

This pattern was the product of extremely high levels of economic growth accompanied by accelerated urbanisation as China transitioned rapidly from a mainly rural to chiefly urban country. But, it was also the consequence both of aspirations towards super-modernity and of an extraordinary collusion, which propelled the supply of housing units far beyond the demands produced by urbanisation. A massive real estate bubble ballooned as developers made lucrative deals with local authorities and financial institutions. They bought development rights on state-owned land at below asset cost, and benefitted from both the risk buffers provided by local governments and cheap loans as banks poured excess liquidity into the property market.

What does the Chinese presence mean for cities in Africa, and to what extent are the patterns of urban development present in modern-day China replicated on our continent? First off, the diversity of the Chinese presence bears noting. The volume of small Chinese traders makes them an important category, but they produce urban landscapes that are very different from the master-planned developments of contemporary China. Traders occupy stalls and small shops along the streets of African cities, as well as open market places and Chinese-owned malls. Their business settings are diverse and widespread: along Derrick Avenue in a previously Jewish suburban neighbourhood of Johannesburg; in a cluster of Chinese-owned malls along the historical mining belt in the same city; in Chinatown (a mall) in Lagos; along Boulevard du Centenaire in Dakar; in Eastleigh in Nairobi; in Ngaba and Kalamu in Kinshasa; along William Street in Kampala; and in the Kamwala market in Lusaka. The Chinese entrepreneurial diaspora is creating a textured urban space marked with Chinese symbols but is not otherwise qualitatively different to the form of urbanism in Africa where small-scale trading is in fact long established. A possible exception may be the Chinese malls in Johannesburg, which cluster in a way that is very different from other malls in the city, and increasingly also include residential uses, and so may be a distinctive urban form.

State-owned and private Chinese corporations constitute a second form of Chinese presence in African cities, but these large transnational institutions are generally concentrated in existing hubs of corporate capitalism. This is not a new form of urbanism, but rather an expansion of the geography of transnational capitalism in Africa that is driving the growth of vertical skylines in Africa’s cities.

A third impact is from Chinese investment in urban infrastructure. Examples here include the elevated light railway in Addis Ababa and Lagos; the ring road around Nairobi; the new deep-water container port north of Dar es Salaam; and the gated economic zones outside Addis Ababa, Lagos and Kigali. These modern infrastructure projects are not specifically Chinese but they include urban forms that reflect particular orientations of contemporary Chinese urbanism, such as the Special Economic Zones, which were introduced first in Shenzhen in the late 1970s and are now ubiquitous across China.

Finally, Chinese property developers are also making their mark in Africa. There has been an increase in Chinese real estate investment in recent years, particularly after the property bubble—Chinese firms have had to look outside their homeland for opportunities. Kilamba Kiaxi, a new city located 20km outside of Luanda, Angola, is seen an emblematic development. China’s CITIC Construction Company built 750 residential towers in a mass superblock development that is intended to eventually house 200 000. This development closely resembles models in China, but is it really the portent of similar developments across the continent? Kilamba Kiaxi was, in fact, the product of particular conditions that are not easily reproduced. It was part of an oil-for-investment deal between the Chinese and Angolan governments, with the highly centralised and authoritarian Angolan government ensuring that the conditions were in place for a development of this scale. In most cases Chinese investors would have to negotiate developments in environments that are very different to those in China. There is, however, an important test case pending. CITIC has recently concluded a deal with the World Bank’s International Finance Corporation to build 30 000 homes across Nigeria, Rwanda and Kenya over the next five years. Will these developments also resemble the great urban fortresses of modern China, or will host countries have the capability to negotiate urban forms that are more appropriate to the nature of Africa’s cities?

No other Chinese development in Africa is comparable in scale with Kilamba Kiaxi but there are some developments by medium-scale Chinese real estate firms in Nairobi and Johannesburg worth noting. They suggest patterns of development that replicate the more mundane practices of local developers. In Nairobi, for instance, the 600-unit Great Wall Apartments resemble medium-rise developments in suburban Beijing but are not otherwise identifiably Chinese. In Johannesburg, Galencia Property, a subsidiary of a large multi-sector firm in Chengdu, has built more than ten gated townhouse complexes in Midrand and Fourways, on the northern edge of the city, but these replicate an already well-established urban pattern. The developments avoid Chinese markers, attempting to project internationalism. Galencia’s most recent development is an estate of 236 luxury homes called Mont Tremblant Estate and is marketed as having been designed by a top American firm. There is considerable hype around the purchase of the huge Modderfontein site on the northeastern edge of Johannesburg by Hong Kong-listed Shanghai Zendai Property (Zendai). Again, the image is international rather than Chinese. Zendai’s founder and former chairman Dai Zhikang declared his intention to build “the New York of Africa”. The company employed Atkins, a British consulting firm to produce the master plan and negotiate development approvals with the city administration.

In Johannesburg, too, property investors must negotiate with a local government that has its own development vision, and must work in a market that is hardly likely to accept the superblock model. This may, however, be different in Tanzania where a deal has recently been struck with the Chinese to build a satellite city outside of Dar es Salaam, and in Addis Ababa where Sinomark Real East is to develop a 21-tower luxury superblock near Bole International Airport.

The future remains profoundly uncertain. The Chinese economy is slowing down and the demands for resources from Africa are waning. For the moment, Chinese property investors are still searching for opportunities in Africa, but a weakened home base may ultimately hurt companies operating in Africa, as has already happened in the case of Zendai, for example. Nevertheless, the Chinese presence in Africa, and in its cities, is now well established, and the impact from China is likely to persist. In our view, however, this impact may not take an evidently Chinese form except in very specific localities. In most places the Chinese investors will have to negotiate a foreign context where the conditions that produced urban forms in their home country are not present.

Yan Yang is a research associate at the Wits Cities Institute