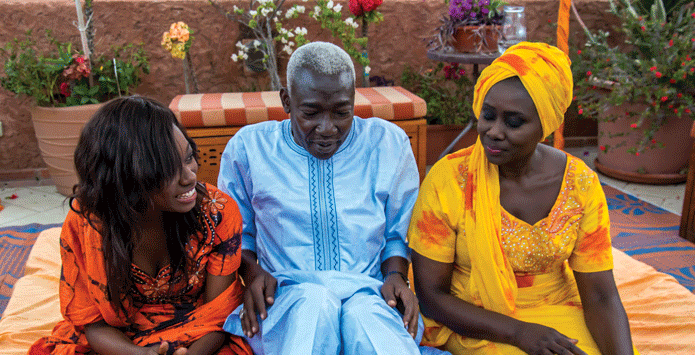 Cliches in the city

On films that confirm and challenge stereotypes about African cities

There are no happy people in African Metropolis, seven tightly edited short films “from African cities” produced by Steven Markowitz and the Goethe Institut, and recently launched at the Durban International Film Festival in South Africa. Directed by a crop of emerging new African filmmakers, the shorts, which range between five and eight minutes in length, are set in six African cities: Joburg, Kinshasa, Nairobi, Cairo, Lagos, Dakar and Abijan. Harsh, dirty and sometimes violent, these cities – at least in their filmic life – are filled with cookie-cutter characters: pimps, prostitutes and sick children, a downtrodden underclass that has been a staple of post-independence cinema since at least Djibril Diop Mambéty, and in 2005 culminated with Gavin Hood winning a best foreign film Oscar for Tsotsi.

There is little soul in most of the cities portrayed in the seemingly over-workshopped African Metropolis series; the inhabitants mostly seem to go about what can only be described as a series of pre-ordained misfortunes. In Vincent Moloi’s Berea, a film named after an inner city neighborhood of Joburg, an old Jewish man – afflicted by a nameless malady – refuses to have sex with a black prostitute who has disturbed his Friday night Shabbat dinner. The plot thickens: the woman, undressed, demands payment; the money is needed to placate a faceless pimp who may be holding her newborn baby ransom. Abuse is rampant. In Folasakin Iwajomo’s The Line-up, a Lagosian man, desperate to save his ill sister, joins a mysterious line-up of naked young man on display for a smiling, bejeweled woman – their fate is unknown.

To Repel Ghosts, by Philippe Lacote, is a fictionalised account of Jean-Michel Basquiat’s now fabled trip to West Africa before his death in 1988. The New York painter is hustled by some thugs on arrival, saved by friends who then take him into Abidjan to connect with his roots. There is a bit of dancing in the streets, the occasional recitation of abstract poetry (about self-doubt and self-discovery), and this bit of pedestrian dialogue by a new sidekick: “Watt told me you are famous in the States.” – And so it continues, the cast chewing scenery to the final credits.

One film stands out in this uneven collection. The Other Woman, by Senegalese director Marie Ka, a prominent figure in Dakar’s film scene, brings a quiet, restrained and contemplative energy to the proceedings. The Other Woman portrays the sexual emancipation of two women in a polygamous relationship; the quiet intimacy between the two female leads is infectious – and stereotype-free. The film does not try to be self-aware and “contemporary”, like the rest – this works in its favour.

Homecoming, by Kenyan director Jim Chuchu, is the most experimental film, and perhaps the most ambitious of the lineup. Playing with some bold ideas, the unseen is as portent a presence in Homecoming as what actually appears on screen, adding a tension and urgency that’s exciting in this alternative take on science fiction. It recalls the South African-Canadian director Neil Blomkamp’s experiments in relocating science fiction from familiar, slickly technological western settings to unfamiliar, threadbare African locales. Some of the ideas in this film merit further exploration, and one hopes that Chuchu – a former member of Just-A-Band, the Nairobi based crew that found YouTube fame with their Makmende inspired music video titled Ha He three years ago – gets an opportunity to develop them into a longer piece, albeit with more expositive dialogue.

There is a credible case to be made for Nairobi leading the way in independent African cinema. In 2012 Nairobi director David ‘Tosh’ Gitonga released his first feature-length film, Nairobi Half Life. The storyline is familiar, Made: a starry-eyed boy leaves his rural home in search of fame and fortune, runs in with the wrong crowd in the big city, but using his wits manages to find salvation, reclaim his future and get the girl too. Lead actor Joseph Wairimu excels in a stereotyped role. Unlike Chuchu’s film, Gitonga however fails to create tension forwarding his film. His Nairobi lacks the intensity and excitement of Djo Tunda wa Munga’s 2010 Kinshasa crime flick Viva Riva! Tunda is credited as an executive producer on Kisita.

Markowitz, who was an executive producer on Tunda’s breakout film, and the Goethe Institut deserve applause for their involvement in this showcase. But – yes, one of those – this project is not without its flaws. Fundamentally, the majority of the films in this showcase lack big ideas. A friend urged me not to judge the work too harshly; it is apprentice work, he said. Fair enough. But …