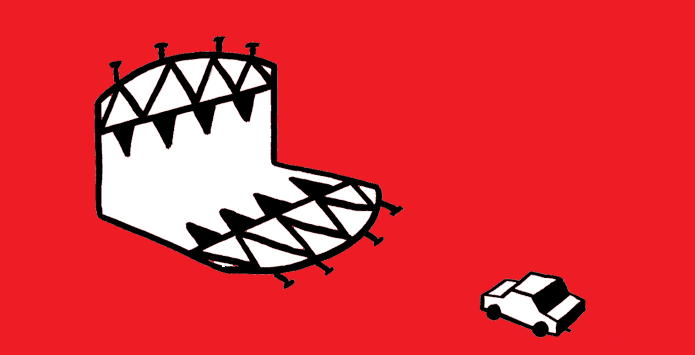 Of all the junk that clutters South Africa’s urban roadsides, towering advertising hoardings are among the worst offenders. Traffic authorities denounce as distractions the modest eye-level bunches of fresh flowers posted as roadside memorials to people who have been killed in motor crashes, but they blithely tolerate garish litter intended to persuade passing motorists about the virtues of some or other service or commodity. The imp(r)udence of flogging new models of motor vehicle from these oversize hoardings is breathtaking: each such advertisement should carry an urban health warning.

Giant roadside advertising hoardings are lurid impositions—they also distract, and subtract. They cast real and metaphorical shadows. They restrict views and they square nature. They turn grass verges into commodities sold off to the highest bidder. Topping the hoardings with solar panels is a lame apology. Passive commercialisation of traffic corridors is nothing compared to the next generation of road ‘whoreding’. Imposing erections are getting a leg over the road. Gantries slung across motorways are coming into view ominously. They do not suspend pedestrian bridges joining roadside communities isolated by tarmac. They do not suspend neon-lit, greasy spoon eateries where weary motorists and truckers perch on plastic seats over the motorway, staring down at metal cocoons moving beneath.

Instead, the new gantries carry the technology of automated road-user pricing and policing. The structures also embody the assumptions, values and practices of civic authorities, property owners and engineers from several centuries back. Arch in both design and attitude, the tolling barriers emerge from and express views on ownership, entitlement and control in cities, but don’t invite discussion of those presumptions. So retro in purpose and shape, road toll gantries straddling motorways may even be mistaken for hangmen’s scaffolds. All that is missing is a cubist design that inserts a triangular blade shape at the top. An arsenal of cameras, code detectors and transmission devices crest these modern battlements. But who is the enemy? What is being protected? What is being fought for?

Road tolling is not new. In the Roman Empire, bridges were tolled. In medieval times, there were tolls at city gates and on countryside estates where landlords charged for dubious road improvements. In recent incarnations, tolls have been levied at bridges and tunnels that offer more direct travel options than circuitous overland services, or faster travel than slow lake and river ferries. North America’s motorway network is dotted with tollbooths—and legend is dotted with the antics of latter-day cowboys trying to evade payment. Other classical figures heave into view: the highway robber is one.

Charging the users of mobility infrastructure is certainly one way of recovering development costs and accumulating funds for maintenance. And user charging may indeed seem fairer than general taxation at first take. But, as public complaints and organised civil protest over prospective road tolls in metropolitan South Africa reveal, the appetite for additional taxation is limited in the context of persistent urban inequality and poverty, and poor public transport alternatives. The consultations, denials, exemptions, marches and threatened civil disobedience make a heady new urban cocktail.

If there is good news, it is that urban road transport can still be politicised actively in cities of the global south. And, whereas for a long time mainly poor and disenfranchised citizens protested about urban transport, now even prosperous sections of society are showing signs of alarm at the way urban mobility infrastructure is being costed and paid for. The immediate political economy of tolling is one thing; the long-term consequences are another. Tolling is likely to have adverse and distorting effects on employment, spending, commerce, accessibility and land prices. Road-user charging everywhere is a double-edged blade: it axes unnecessary traffic but simultaneously reshapes the very urban spaces from which it hopes to generate long-term funds.

Modern urban transport systems pedalled as solutions do not stay modern (or solvent) for long. A year away from its 150th birthday, the once-modern London Underground is a case in point: gorgeous in her heyday, the old lady is rickety, high maintenance, hopelessly inadequate, and a bit embarrassing. The flash new subways in Asian cities put the tottering dowager to shame, but they too are headed for extinction.

Motorway toll gantries have a shape reminiscent of the vast, trunkless legs of stone in Shelley’s 1818 sonnet ‘Ozymandias’. Humanity seems bent on recreating dismal monuments to technological vanity. Even now, we appear to be erecting, blindly and vainly, a suite of colossal wrecks. How long can urban automobility and motorways last—how long should they be tolerated in metropolitan areas striving for economic, ecological and social sustainability?

Tolling is totemic. Like a hangman’s scaffold, it can seem desperate and punitive. It is calculus rather than compassion. It expresses a cost-recovery consciousness (even while creating more opportunities for financial corruption). It vaunts an arid imagination. The idea that cities can and should be places where it is possible to move about freely has been corrupted; freedoms are tightly constrained. Is there anything more notional than a freeway?

Yet transport service delivery can be different. Take a ride on the Staten Island Ferry system in New York City. Operated by huge boats on a frequent schedule from smart terminals, it is free to use. Is it simply wish-projection that enlightened and/or pragmatic city authorities discount the cost of subsidy against the costs of collecting coins, printing tickets, facilitating card use, staffing check points, repairing barriers and apprehending fare cheats? Surely the authorities also weigh the cost of servicing the dense cross-harbour pedestrian traffic against the less visible costs that would be incurred were ferry users to be charged: car/bus/taxi traffic might increase; Staten Island residents might look for local work; unemployment may ensue; commercial rents in Manhattan might fall. And one of the world’s great cities would lose a 105-year-old icon.

It will take courage and imagination to re-launch urban transport not as a business but as a service to the public—which is paid for indirectly; whose costs are absorbed on the understanding that efficient, carbon-neutral, socially just and dignified mobility is a priceless metropolitan asset; and whose value is capitalised and captured many times over in other spheres. The task routinely set urban transport consultants and advisers is to find the cost of projects and recommend ways of recovering those. We should also be asking them to assess the broader social and cultural value of projects, and the human values and vision they enshrine.

Gordon Pirie is a former Deputy Director of the African Centre for Cities at the University of Cape Town. His research focuses on mobility and accessibility in the metropolitan south.