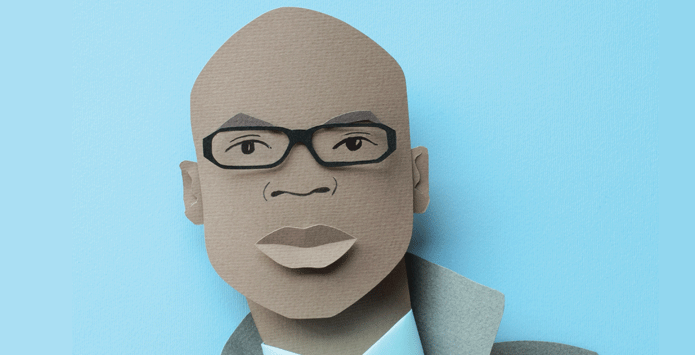 Edem Awumey lives in Gatineau, a city in western Quebec, part of French-speaking Canada. On his first visit to South Africa earlier this year, the 38-year-old novelist gave his first interview in English. It went effortlessly. Born in Lomé, capital of the West African state Togo, Awumey originally wrote short stories before publishing his first novel, Port-Mélo (2006). The novel was awarded the prestigious Grand prix littéraire d’Afrique noire, marking the start of a career studded with accolades. His second novel, Les pieds sales (2009), published English as Dirty Feet, was a finalist for the Prix Goncourt, a venerable French literature prize. In 2006 the Swiss watchmaker Rolex, which since 2002 has overseen an international multi-discipline arts mentorship initiative, selected Awumey to be a literature protégé to Moroccan writer Tahar Ben Jelloun. Now part of a network of alumni, Awumey visited South Africa in 2013, his first time in the country, for a Rolex-sponsored event at the Baxter Theatre. This interview draws on a conversation with Awumey in Cape Town, which became the basis for a further email exchange.

Cityscapes: When was your first interview ever?

Edem Awumey: Probably in Togo, about 15 years ago, I was a student at the University of Lomé. We had a cultural club and I was one of the members. I gave an interview to a student newspaper.

CS: How do you feel about doing interviews?

EA: I’m comfortable with interviews—if they’re in French. The goal is not only to express myself. The questions asked by journalists and other people are a way for me to understand another path or aspect of my creation. It is a way for me to learn. In Quebec and Montreal journalists can be really tough. “I prefer your first novel, the second one, for me, is not a failure but …” I have no problem with that. I am still learning. Near the end of his life, at one of his last conferences in France, at the Sorbonne, Jorge Luis Borges spoke about difficult experiences. He believed that we as humans learn about experience through difficulty. To have contact with a journalist who doesn’t want to simply pleasure me, but is frank and direct, I like that. I try to learn from that.

CS: Is Borges an important figure for you?

EA: Oh yes, in fiction. For me he is one of those writers who tried to rebuild literature, to rebuild our world. It’s another way to read fiction. Borges, Gabriel Garcia Marquez, Mario Vargas Llosa.

EA: Absolutely. That was the challenge for me. South American literature is associated with the term “magical realism”. The thing is to make sure the realism is credible before you set out to question the sky. You have to master your earth before you start a dialogue with the sky.

CS: Both Marquez and Losa worked as journalists. Is it something you would consider? Have you ever interviewed anyone?

CS: Would you want to, and who?

EA: Ho! For me it’s clear: Nelson Mandela. He is somebody who crossed the whole century. He is someone who tried to convert pain—of segregation, apartheid—into something beautiful.

CS: Are you not afraid that if you meet him you might be disappointed?

EA: I won’t be disappointed. I read an interview with him in which he said he is not a god, he is just a man, someone who has made mistakes.

CS: Mandela’s No Easy Walk to Freedom was first published in 1965 as part of Heinemann’s influential African Writers Series. What writers from that series made an impact on you as a young writer?

EA: Wole Soyinka and Nuruddin Farah are important to me. Farah lives here in Cape Town. I wrote my Masters thesis at the University of Lomé on Farah’s novels. My thesis was about the image of women in fiction. I looked at his first novel, From a Crooked Rib (1970), which describes life in Somalia from a feminine perspective.

CS: Have you met Farah?

EA: Yes, at a Rolex Arts Initiative event at the New York Public Library in 2011.

EA: I met him at the same event. I was very proud to have dinner and breakfast with the big lion, Wole Soyinka. I was really impressed and nervous. I remember the first moment I met him: it was in a doorway at breakfast. I introduced myself, and he said ‘Bonjour, my name is Wole Soyinka.’ I laughed. ‘I know who you are!’ I replied.

CS: What are your thoughts on Ngũgĩ wa Thiong’o?

EA: To be simple, those three writers are brave: brave writers, brave people. It is not easy when you are from Nigeria, Somalia or Kenya. It is a permanent struggle against injustice and military governments.

CS: Since we’re talking about influence, when you were growing up, how important were Ousmane Sembène and Léopold Sédar Senghor?

EA: Senghor was important to me, yes, but Sembène was more important. He was close to poor people in Dakar.

CS: He is a bit like Djibril Diop Mambéty, in a way.

EA: Absolutely. Senghor too, but he was philosopher, a poet, and a politician. Oh, here’s another name. How could I forget? Aimé Césaire! I love Césaire. Notebook of a Return to the Native Land (1947) is a great book about the way to retake our lives, our space, oneself, a space we can share like black people, Indian people, even white.

CS: Okay, change of tack. You are from Togo. Do people routinely ask you questions about Tottenham Hotspur footballer Emmanuel Adebayor?

CS: Do you support football? Who is your team?

EA: Oh yes, Brazil! In Europe, for sure Barcelona.

EA: I am from the west coast of Africa. In the fourteenth and fifteenth century, it was the point of departure for the trans-Atlantic slave trade. Boats set sail for Brazil, to Salvador de Bahia. The black people who live there now, most of them are originally from Nigeria, Benin, Togo, where I am from. I could, feasibly, go to Salvador de Bahia to look for my roots. That is very interesting. There is a novel about this topic—it is not a topic, it is a reality—a novel by a Guinean author Tierno Monénembo, Pelourinho (1995), which was set in Brazil. It is about an African writer who made the voyage to Salvador to find his brothers. Maybe I can find my roots here too.

But I am not just interested in South American writers. There are also a bunch of Portuguese writers: Fernando Pessoa, José Saramago, António Lobo Antunes. I love Antunes—he was important to me as a young writer. Humility is as important as writing well. When Albert Camus received the Nobel Prize in Stockholm he spoke about this point. The most difficult thing in life is not moving up, but moving up and staying yourself, keeping your humanity, remaining simple and humble. Antunes in an important model of this for me. He was a physician, went to Angola during the war of independence, and was really traumatised by his experience. When he returned to Lisbon, he continued his career for two or three years. But he needed to express what he saw in Africa. He spoke about Angola and Congo like an African.

CS: In 2000 you won a UNESCO-Aschberg scholarship to be writer-in-residence in Marnay-sur-Seine, in France.

EA: Yes, but instead of staying for five months in France, I stayed for five years.

CS: During that time you completed various diploma courses in languages and literature and cultural development at the Université de Cergy-Pontoise. You then capped the experience by completing a PhD focusing on the literature of exile. You also published your first novel, Port-Mélo (2006). I want to jump ahead to your second novel, Happy Feet (2009). The novel is set in Paris and tells the story of Askia, an African migrant who drives a taxi. I am interested in your time in Paris, in particular the transformation of your personal experiences into fiction. Was it, for instance, difficult drawing on such a storied setting as Paris for your novel?

EA: I spent five years in Paris, which is not a long time, but it allowed me to observe most aspects of this city: people, behaviours, the geographical space, how people speak, socially and politically. It was really interesting. Paris appeared to me like a space of tensions—cultural, social political, tensions between different sensibilities, races and forms of knowledge. I noticed all those things. Like a camera, I recorded the images, landscapes and ways of speaking. But my goal was not to transform this material into a novel. I wrote Happy Feet in Quebec, two years before I lived in Paris. I think this distance helped me to escape some of the clichés of living in Paris. It is the distance of objectivity, and like artists we need to have this distance in order to establish a particular relationship with our material. But I can’t say that I am knowledgeable about this city. In the novel, Askia negotiates the city by night. Askia is in Paris to search for his missing father, because he heard that his father was possibly in the city. But it could be London or Montreal. Geographic space doesn’t play a major role in the novel.

CS: In 2006 you became a Rolex Arts Initiative protégé for literature under the mentorship of Tahar Ben Jelloun. Can you talk about the things you learnt from Jelloun?

EA: We principally spoke about the credibility of an author. To give you an example, we are in a nice green district of Cape Town. Yesterday we visited Gugulethu township. It completed the map. To talk about Cape Town is to talk about the bus tour, this space, Gugulethu. But it is not just geography; characterisation is important. We need to trust our characters. Even if it is fiction, we need to trust the character. That’s what I learnt from Tahar.

CS: How did you draw on these conversations and insights for your third novel, Rose deluge (2012)? “Is the author knowledgeable about the complexities and contradictions of a city?” you for instance told me when we first met. I would be interested in exploring this statement further in relation to Rose déluge.

EA: The novel is set between three spaces: Hull, a little city in Québec, Lomé, the capital of Togo, and New Orleans in Louisiana. Hull, is the space of present, Lomé the space of the past, and New Orleans, the land of a possible future. It tell the story of Sambo, who journeys from Quebec to Louisiana where he has to bury the remains of his aunt, Rose, who died in Lomé—during her lifetime Rose considered New Orleans to be her fatherland. Of the three spaces, I know Togo best—I grew up there. I currently live in Quebec, a complex society trying to conserve its language and culture, a society that coexists with English-speaking Canadians, and the influence of the United States. In the novel New Orleans is a city of hope, hope after disaster of Hurricane Katrina. It is a complex city, because of US history, because of its social makeup, its native population of whites, blacks, Cajuns (who are descendents of French Canadians) and Creole peoples. I made a trip to New Orleans before writing the novel, not to study the city but to try to feel its complex soul. I hate definitions, but possibly that is why we read literature: it is a way to feel the soul of a society