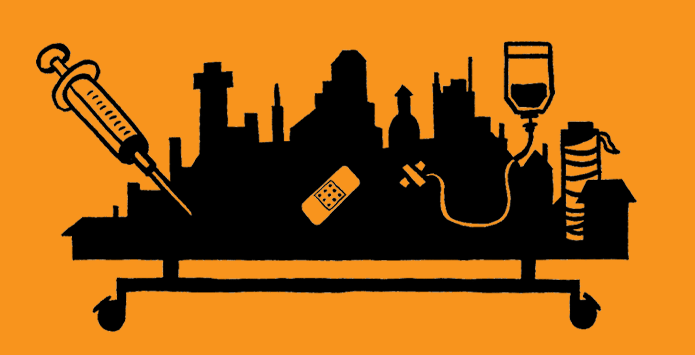 Health justice now for the future

On an urban planet, the struggle for global health equity will be in cities, and within city neighbourhoods. Global health is now urban health, and urban health justice is the recognition—supported by over a century of epidemiologic and medical research—that the qualities of the places where you are born, grow, live, work and age determine whether and how frequently you will get sick, suffer debilitating disease or premature death. Urban health injustice is a global crisis equally afflicting the global south and north, as the poor in cities, often living in informal settlements and marginalised ghettos, struggle for the resources, political power and essential services necessary to survive and thrive. While much emphasis in global health is focused on the biomedical approach—which often aims to address single diseases, change individual behaviours or uncover genetic explanations for illlness—medical or public health professions alone will not solve urban health justice. Community residents, along with city planners and policy makers outside the health care sector must recognise their role in promoting urban health justice

As the World Health Organisation and others have recently recognised, urban health justice is the planetary struggle for equity on par with similar calls for urgent action on climate change, global poverty and sustainability. Like these global issues, urban health justice will require new frameworks for defining issues, researching problems and intervening in cities. This new framework must take a richly historical view of urban places to understand how they have come to face contemporary health issues, grapple with and simultaneously engage with the multiple dimensions of place that contribute to health and illness, and intervene even with incomplete science, but informed by local and community knowledge—not just that of professional experts.

While the health of the least-well-off urban populations was a common issue in 19th and early 20th century public health and city planning, the fields became increasingly separated throughout the 20th century. Recent calls for the reconnection of urban planning and public health in the 21st century, such as the 2010 World Health Day declaration on urban health, tend to emphasise promoting health through the physical (re)design of cities. Scholars point to the 19th century sanitary and hygiene movements and more recent neighbourhood-effects on health research as evidence for today’s emphasis on the built environment. Yet, the design and built environment and health movements today largely ignore what such 19th century scholars as Louis René Villermé in Paris, William Farr in England, and Rudolf Virchow in Germany emphasised: namely, that poverty and social marginalisation, not just neighbourhood design, explained differences in disease and death rates for the urban poor compared to the well-off. A focus on urban design will not address the structural economic and social policies and unaccountable institutional practices—what the UN Commission on the Social Determinants of Health called the “causes of the causes”—that continue to drive urban health injustice.

Urban health justice requires action today even in the face of scientific and political uncertainty; humility demands acknowledging errors but good planning demands having systems in place to learn and adjust strategies over time

The rise of 19th and 20th century urban sanitary science clearly improved health in cities for some groups, as did new laboratory understandings of germs and disease, but approaching urban health as a science of experts also disconnected planning and health from their social and equity goals. Most science underwriting health interventions in cities continues to emphasise piecemeal and pathogen-specific interventions, such as housing, street and infrastructure design and the treatment of drinking and wastewater. This view of urban health science has also helped ingrain a fragmented system of urban governance, where distinct professionally staffed bureaucracies—such as those for water, sanitation, waste collection, housing, environment, and so on—make decisions disconnected from one another and from civil society groups aiming to improve urban health.

Overcoming the entrenched professionalization and fragmentation in urban management will demand new models of governance that promote health justice. Planners, social scientists and community residents have a critical role to play here, by partnering with clinical and biologic scientists to help highlight the histories of places and the biographies of populations that also influence health, and by explicating the overlapping and related aspects of places that seem to contribute to health and wellbeing in cities. Epidemiology is well known for documenting what was wrong, toxic and pathogenic in cities and urban neighbourhoods after people are sick or dead. Urban health justice demands much more emphasis on appreciative inquiry—or what characteristics of places contribute to wellbeing and resilience, and what institutional practices and public policies can promote great urban equity?

Urban health justice requires action today even in the face of scientific and political uncertainty; humility demands acknowledging errors but good planning demands having systems in place to learn and adjust strategies over time. In my own work in such low-income urban neighbourhoods as the South Bronx in New York City, West Oakland and North Richmond in the San Francisco Bay Area, and in the slums of Nairobi, Kenya, our approach is to build coalitions with residents and local organisations that work to identify the combination of built environment, social and economic stressors as well as cultural and political factors that contribute to illness and resilience in these places. Local institutions build leadership and power through the legitimisation of local knowledge and lived experiences, and by linking community work with other places and organizations in regional, national and international networks. Critical reflection, experimentation and ongoing monitoring are also strategies we use to adjust interventions to new knowledge and changing political conditions, recognising that urban health justice is not a static state, but an ongoing project with distinct milestones that ought to be ratcheted up as we go.

Working for health justice in the Mathare slum of Nairobi, with our partner organisations Slum Dwellers International, Muungano Wa Wanavijiji and Muungano Support Trust, we have focused on an integrated, participatory improvement strategy. What this means is that we aim to avoid focusing exclusively on one issue, such as housing, water and sanitary infrastructure, land rights or health care, but instead work with residents to generate evidence, interventions and policies that combine all these issues. While never easy, this work reflects community members’ lived experience, engages residents to gather and make meaning of evidence, and ensures residents are equal partners in policy advocacy and implementation of comprehensive slum upgrading strategies. Our integrated approach aims to move beyond boutique, single-issue interventions that have largely failed to address urban health equity for the growing population living in urban informal settlements.

Acting for urban health justice means building from a critical review of policy history that informs a relational view of place, where the urban poor are viewed as expert scientists about their place, and policy and institutional change are coupled with systems for monitoring and learning. Yet, this approach runs counter to today’s dominant view of health, policy and planning in cities, which tends to focus on treating residents for specific diseases, designing one-off interventions to change the built or social environment, and rarely evaluates whether any of this is working to promote greater health equity. Deliberate policies, many by complacent planners and policy makers—not medical and public health practitioners—helped create the inequitable conditions that contribute to urban health injustice today. Only deliberate place-based policies and institutional changes, both within and outside the health and medical sectors, will reverse the social, economic and political inequalities that continue to link health and place.

Jason Corburn is a professor in the School of Public Health & Department of City & Regional Planning at the University of California, Berkeley. His books include Street Science: Community Knowledge and Environmental Health Justice (2005) and Toward the Healthy City: People, Places and the Politics of Urban Planning (2009).