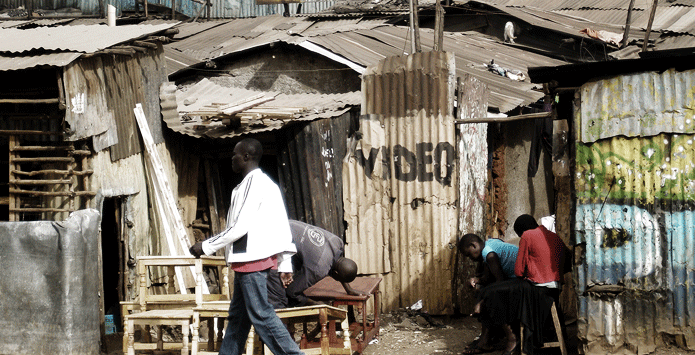 Kibera is a large informal settlement located five kilometres from Nairobi’s city centre. Its urban form is familiar across Africa, but Kibera’s history is culturally particular and personal to Kenya. We meet Millicent Auma Otieno, a local resident whose story tells a larger tale.

Roughly one hundred years ago, 291 Nubian Sudanese askaris, members of the British army’s Kings African Rifles (KAR), moved onto a piece of land five kilometres south west of the Nairobi’s city centre. The Nubians were awarded land, a former military training ground, as a gift by the British government for their loyalty and service protecting the railway line that linked Uganda to the Kenyan coast. The soldiers called this place Kibra, the Nubian word for forest. As part of a “detribalised” class, the Nubians presented a dilemma for the colonial rulers. Many could not return to Sudan, because they had converted to Islam and Christianity and would not easily be integrated back home. But they did not “belong” in Kenya either as they were not under a tribal authority. Britain’s colonial strategy of indirect colonial rule, where tribal leaders were used to control and regulate local communities, would not work for the displaced Nubians. With its location in close proximity to the KAR barracks, the settlers thus became the charge of the army.

What was meant to be a settlement for aging Sudanese military veterans and widows soon grew with the migration and integration of local populations. Historian Timothy Parsons writes that Kibera, the name by which the area came to be known, “became a perpetual irritant to the European government and citizens of Nairobi as the town gradually grew out to meet it”. Its existence was under threat because of its location on valuable land and continuing racial tensions with neighbouring Europeans. But unlike similar shantytowns in other parts of the city, Kibera had a powerful godfather in the figure of the army, who protected residents from eviction. Protection did not mean ownership: the British were reluctant to give the Nubians legal title to land that they regarded as too valuable to hand over to natives. This insecurity, coupled with the settlement’s uncanny staying power, remains the defining hallmark of Kibera 100 years after its establishment

I grew up barely a mile from Kibera, but knew only what was written about it, and the folklore that it inspired in the city surrounding it. The settlement, which elicits diverse interpretations—it is a headache for urban planners, source of outrage for Kenya’s middle and upper classes, who would prefer it were invisible, an experimental playground for international development agencies, and the boon and bane of Kenya’s politicians—has long held a kind of mystique for me. By my adulthood, I could recite from memory the troubles facing those living in Kibera: inadequate water and sanitation, insecurity and violence, poverty, poor maternal and child health, and so on. But the closest I got to Kibera was from the safety of Mbagathi Way, the road delineating the settlement’s eastern boundary. At its crest, the ubiquitous and corroded mabati (tin roofs in Swahili) become visible, then just as quickly disappear in the descent towards the middle class neighbourhood of Nairobi West. Kibera is like that, fleeting, shy, even protective. But at the same time it is bold, aggressive and unapologetic; it dares disagreement, tempts a fight, which it knows it will win.

I first met Millicent Auma Otieno sitting at my desk in Johannesburg. It was through her website Kiviwosheg, an acronym for Kibera Visionary Women Self Help, that I learned she was a single mother, homeless, without income, and in debt. Her Kikuyu neighbours had burnt down her property in the violence that followed the disputed 2007 presidential election. I was working on a project on women and violence in Kibera, and Millicent’s experience and organisation seemed a good place to begin my research.

When I first emailed her, I wondered whether she would respond. I am Kikuyu and she is Luo—it was “my people” that had burnt her property and business. Kenya’s 2013 elections were also a few months away, and anyone prowling around asking questions about the violence, in addition to opening old wounds, might also seem suspicious. Of course, I had ulterior motives for wanting to go to Kibera: I needed to feed my curiosity for this place, which had always been so close, yet so distant. I talked about Kibera at conferences, but I had never once been there. I felt like a fraud. Visiting Kibera represented a personal journey, one on which I pinned hopes of finding answers to questions about my upbringing, my ethnic identity, and what I had become. It also fed a stubbornly childish streak, of needing to go to a place that had long been forbidden.

Caroline Wanjiku Kihato is a writer and urban planner based in Johannesburg where she is currently the regional theme coordinator for Urban LandMark in South Africa.