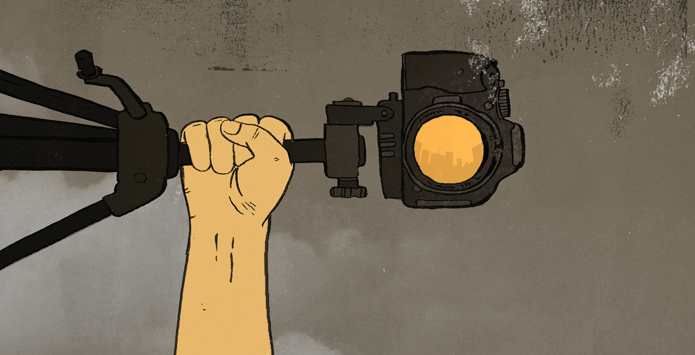 After returning to Bangladesh in 1984, Shahidul Alam forged a stellar career in photography, education and social activism that is shifting the way South Asian countries are portrayed. He spoke to Zeeshan Khan

Shahidul Alam is a photographer, journalist, curator, human rights activist, media teacher, cultural entrepreneur and lapsed chemist based in Dhaka. But he is far more than this aggregation of nouns suggests. Driven and forthright, Alam has wed his diverse artistic interests, notably in photography, to a socially minded approach to doing things. In 1989, he cofounded the photo agency Drik Picture Library with his life partner, the writer and anthropologist Rahnuma Ahmed. His aim was simple: to create a forum that would enable South Asian photographers to narrate stories of underdevelopment from among and between, rather than outside and above. There are obvious risks to working in Bangladesh, which retains its repressive political culture of earlier decades. As recent news reports attest, it is also struggling with Islamic extremism. “If enabling social change is measured, it is in Bangladesh that one can get the maximum returns for one’s efforts,” maintains Alam.

Much-lauded for his own output as a photographer, Alam’s activities with Drik led to follow-on initiatives like Pathshala, a Dhaka-based school of photography, and Chobi Mela, an international festival of photography held in Bangladesh. Underlying all these activities is a plucky, can-do spirit that is responsive to changing media economics and horizontal politics in formalising economies. British photographer Gary Knight, co-founder of the VII Photo Agency and a past chair of the World Press Photo, in 2014 summed up Alam’s impressive legacy as follows: “We can follow the lead of people like Alam, who has created an economic infrastructure that supports and sustains photography.” Zeeshan Khan spoke to Alam about his life’s work and the role of photography in shifting his career focus.

Zeeshan Khan: How does a teacher with a doctorate in chemistry choose writing and photography, and more specifically social activism, as a lifelong pursuit?

Shahidul Alam: If I had a degree in photography and had chosen a career as a chemist, I don’t think you would have asked this question. The question is raised because being a chemist has greater respectability in society than being a photographer. I was born in Azimpur in the old part of Dhaka. In 1972, when I was 17, I left the country for the United Kingdom where I worked as a construction labourer to pay my way through university. I had a casual interest in photography then, but remember being impressed by a photographer friend of my brother who used a handkerchief to soften his flash at my sister’s wedding. This photographer also introduced me to high-speed film, which I used to take indoor photos in low light without a flash.

My interest in photography evolved through my involvement with left politics in the UK. I felt I needed a tool to address racism and social inequality, and photography seemed the best weapon at hand. After graduating in biochemistry and genetics at Liverpool University, I got a job as an assistant teacher at London University, which allowed me to read for a doctorate in organic chemistry. It was during this period that I seriously took on photography. Doing all the printing and processing myself allowed me to experiment at relatively low cost. I love kids and got a job in London as a children’s photographer, which I gave up in 1984 to return to Bangladesh. I set up a company called FotoWorld on Elephant Road, but soon gave it up to work as a freelance photographer.

Having worked with international agencies and being aware of what they looked for when representing Bangladesh, it became clear that we could only combat it by controlling the narrative

I do have an interest in science, and enjoyed doing the doctorate, but I think a degree should be a liberating force, not a limiting one. I don’t think people with doctorates necessarily know much more than people without them. Doctorates have value in that they train people about certain processes. There is a rigour and a methodology that applies to many situations. Without a doubt, though, my knowledge of photography far exceeds my knowledge of chemistry, but it is chemistry that I have a doctorate in, and that is what people recognize and value. That is just the way society operates.

ZK: What was the inspiration behind the launch of Drik in 1989, and how difficult was it to get your photo agency off the ground?

SA: Drik was born out of a need to shake off the ‘poverty’ tag that Bangladesh seemed to have. Having worked with international agencies and being aware of what they looked for when representing Bangladesh, it became clear that we could only combat it by controlling the narrative. That required setting up a platform for local storytellers. At that time there was no photo agency in Bangladesh so one had to be created. It was financially difficult, but I lived with my parents and was able to convert my bedroom into an office and my bathroom into a darkroom. I was the cleaner, the darkroom operator, the photographer and the deliveryman. So we could do things inexpensively, and still maintain good quality. That helped. Our calendars and postcards stood out from other productions and soon made a mark. It was never easy, but we survived.

Zeeshan Khan is a journalist based in Dhaka