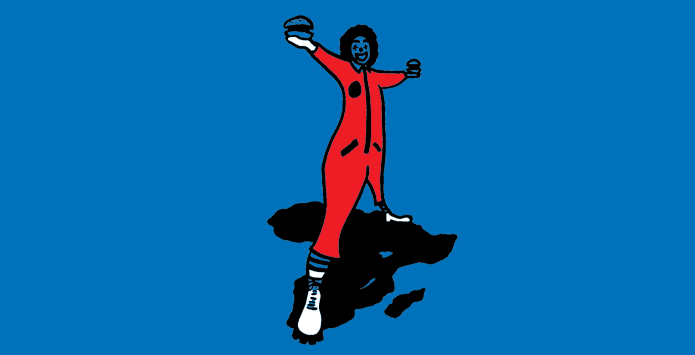 Mopping up the junk food mess

The seductive taste of highly processed, low-fibre foods is shifting nutritional habits across the developing world’s cities, with worrying consequences

The lure of vinegar steaming off piping hot chips is almost irresistible in the late-morning air. At least one person has succumbed to the seduction of the local fish ‘n’ chip shop on Rondebosch main road, Cape Town. He’s slouched at a table set out on the pavement, skewering another spear of deep fried potato with a plastic fork. The nearby university is back in session, and the streets are heaving. Local take-away joints have thrown a driftnet across the current of passing traffic, trawling for custom amidst the schools of people hurrying along the sidewalks.

Most of the ubiquitous high street franchises are there: two big-name burger joints, a pizza place, a Portuguese-styled chicken franchise, which is in a standoff with a knock-off across the road. There is also the independent chippie, a sit-down restaurant, and a couple of nightspots that will open their doors come sundown. A few of the usual supermarket names disgorge people lugging bags of groceries out their doors.

This could be the high street in just about any city in Africa, where fast foods are becoming the hallmark of harried urban life. As compelling as the lure of the city is, moving to it exposes newcomers to an environment where pollution seeps into every crevice of our existence: fumes, smells, litter, occasional effluent, excessive light, brain-jarring noise, heat build-up. All of these slot into the dictionary definition for “pollution”, the act of dumping harmful substances into the soil, air or water in a way that damages living creatures or the healthy functioning of the environment.

Our cities also make us fat, and sick, and junk food is so much a part of the problem. But what if we started seeing it as a form of nutritional pollution, and applied the environmental principle of “the polluter pays” to deal with the mop-up operation as our urban population slumps under the burden of obesity and its conjoined conditions of diabetes, heart disease and certain cancers associated with being too heavy?

Africa’s cities are swelling. In Southern Africa, people are flooding into the region’s metropolises at twice the global rate of urbanisation. Already, an estimated 60% of Botswana and South Africa are urban, and by 2030 half of the 15 South African Development Community member states will be city dwellers. Multinational food chains are zeroing in on this new market, having reached a ceiling in their developed world markets. Big names like McDonald’s and KFC, and even soft drink giant Coca-Cola, are expanding aggressively into Africa—which, admits KFC, wasn’t even on its radar ten years ago.

Since it opened its markets to the global economy in 1994, South Africa has served as a springboard into the continent. In 1997, the country was Coca-Cola’s biggest African market, where the multinational’s advertising budget put it in the top ten advertisers in the country. By 2004, there were over 300 KFCs in South Africa; there are now over 500 in Southern Africa, with more planned. McDonald’s exploded onto the scene, firing up deep frying cookers in 30 outlets in 26 months following the opening of their first store in Johannesburg in 1995. By 2004, there were 103 outlets, almost all in cities; today there are 148 outlets. “South Africa is one of the most successful markets in McDonald’s international history,” crows the South African website for McDonald’s. From South Africa, these companies are pushing north, with an increasingly urbanised Africa giving them easy access to a high-density market where an increasing number of households have a discretionary income to spend on these new, modern, aspirational foods.

City life changes the way we eat and move, and not always for the better. Generally, we ditch the frumpy old provincial foods we grew up on, and fall for the seductive taste of highly processed, less diverse, low-fibre foods. This nutritional transition is happening across the developing world’s cities as people abandon traditional diets for foods that are easy to access, tasty and cheap. For a cash-strapped family, there is nothing like a hit of greasy fast food that costs so much less than cooking up something similar at home.

Combined with the fact that urban sprawl pushes us off our feet and into cars and trains, obesity rates are skyrocketing amongst urban African populations, bringing with them adult-onset diabetes, heart disease and certain cancers. Around the world, populations have been getting heavier since the 1970s. And while the estimated 1.7-billion overweight or obese people are still concentrated in rich countries, obesity rates have been increasing exponentially in several regions of the developing world, particularly Latin America and the Caribbean and North Africa,” according to the UN’s Food and Agriculture Organization. In South Africa, for instance, just over half of all people who are 15 years or older are overweight or obese. The World Health Organization estimates that deaths associated with rising lifestyle-related diseases will “almost equal” the combined deaths caused by communicable, maternal, perinatal and nutritional diseases in Africa by the end of this decade.

Until now, obesity was seen as the problem of the individual. But, as The Lancet medical journal pointed out in a 2008 special report on obesity, our ballooning weight is the result of a “normal response by normal people to an abnormal environment”. Modern city life makes it too easy to make bad food-lifestyle choices, and too hard to make good ones, to paraphrase a recent UK House of Lords report on the issue. And it doesn’t help that consumers are up against the marketing strategies of a global food sector, which relatively even-handed academics have described as nothing short of predatory.

The global food industry has tailored its recipes to target the reward centres in our brains, and is raking in the profits of our resulting addiction to junk food. But government healthcare systems are left mopping up the damage and have to treat rising numbers of diabetics, heart disease patients and the likes. How do we deal with the burgeoning obesity rates? The Lancet reckons that it’s too much to leave it to individuals to fix themselves, and that food companies have been left to self-regulate for too long, without much effect. What if we started looking at the continent’s growing obesity problem in the way we view pollution, and apply the environmental principle of the polluter pays? You spill it: you pay to clean it up.

Fair enough, there isn’t a neat straight-line connection showing direct cause and effect: this burger chain contributed to Person X running up a bill of Y-amount on insulin shots or hypertensive drugs. But you could start by looking at a fast food chain’s market share to get a sense of how much junk they’re spilling into the national diet. Perhaps the answer is a sin tax on fast foods that gets ring-fenced by the tax authorities to prop up a country’s healthcare budget. It would unavoidably push up the price of fast foods, but that might make healthier foods a bit cheaper by comparison. Food companies should be required to make healthier food options, ease off on the fats and sugars, and back off punting their products to children and adolescents. Either way, the food industry’s joyride on the back of neo-liberalism needs to have the brakes applied.

Leonie Joubert is an author and researcher associated with the University of Cape Town’s Centre of Criminology. Her new book, The Hungry Season: Feeding Southern Africa’s Cities, is due out from Picador in September 2012.