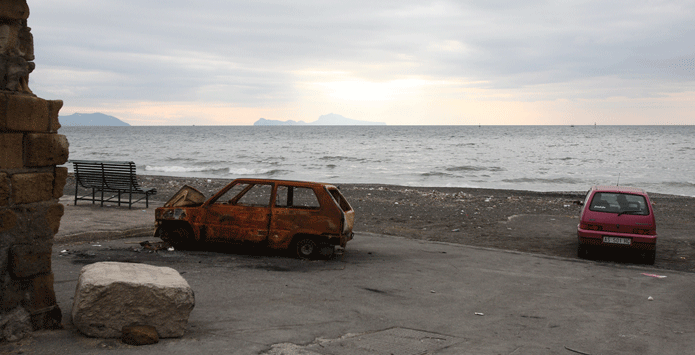 In 2007 architect, designer and artist Danilo Capasso started photographing the Italian port city of Naples, in particular its eastern edge. The district, home to licit and illegal economies, is marked by an unplanned sense of place

Caught in a terrible beauty on the descent into the post-industrial wilderness of east Naples, we look at Danilo Capasso’s photographs for where unexpected possibilities grow, take on a form, and acquire a life. We are drawn into aesthetics of the edge and a politics of the future. There, among the ruins of dead projects, deserted building and abandoned dreams, we wander in the urban archive at the city’s, at the world’s, edge. Here, among the fragments and discarded detritus of yesterday, under the volcano and down by the sea, a forgotten river, pushed underground by layers of concrete and urban sediment, emerges on a black beach as it wends its way into the Mediterranean.

The past persists, hidden geographies return. For this is not merely the scene of abandonment. Between the cracks, pushing up through the poisoned soil, emerge other projects, buildings, social inscriptions and possible futures. Situated in the waste of the city, on the margins of the plan, of the project, we look back into the city’s entrails; here is where it all comes undone: the scaffolding has collapsed and the wires are undone, left trailing in an apparently dead wind.

Naples, viewed from such an angle, presents us with the accumulation of debris and detritus that fertilises possible futures. Like Paul Klee’s Angel of History (1920), famously evoked by Walter Benjamin, we are blown on the winds of progress into the future while, face turned towards the past, we gaze back on the accumulating rubbish of time. Every city has this story to tell. Every city, as the fulcrum of modernity, is the concentrated history of the modern world. Every city is both specific in its telling while simultaneously connected to planetary forms and forces. So what are the tales to be told here on a Mediterranean shore under Vesuvius?

The city itself is full of the evidence of planetary forms and forces: industrial plant and factories, warehouses, transport systems, urban decay and renewal, hotels, billboards, migrant populations, street people and beggars. The buildings, both those that are lived and those abandoned, are not merely silent witnesses to these processes.

Inscribed in the bricks, steel and cement, is congealed labour; that is, lives lived. The buildings speak of multiple trajectories, of the passage of bodies and memories down their corridors, between their walls, over their foundations. The buildings, and the gaps between, speak of discontinuity, of places and projects abandoned, of practices curtailed, of work halted. As emblems of an interrupted time their presence punctures holes in the seamless fabric of progress. For here time has been deviated, derailed, apparently abandoned on an empty siding. Or rather, time has diversified into different sites and tempos.

Where time has seemingly come to a standstill amongst the ruins of discarded factories and buildings, other prospects and projects take the situation in hand, crossing previous uses with unexpected occupations. Urban space, even when abandoned and in ruins, is never empty; it is always replete with time. And this time is always social. This is not simply yesterday’s time but also the time of unplanned futures that invest actuality, opening it up and laying it out under today and tomorrow’s sky. From a rooftop, at street level, riding the elevated highways and the trains, urban space is dissected by a multiplication of views, rhythms and tempos. The very same space is neither singular nor homogeneous. The intentions of the planners and the architects go adrift. Unauthorised forces challenge territorial control. Abstractly patrolled and policed by local government and the law, urban spaces also house other actors, other rules, and further, unwritten, manners of conduct.

All of which is to suggest that we look again. Both the site and our very sight come to be renewed, opened up, interrogated. What has seemingly been cast aside in the dustbin of urban renewal and the onward flight of time still insists and persists, troubling unilateral visions of progress and urban development. Capasso’s look, gazing eastwards over the city, deviates the customary glances of habit. Drawn into the frame, set loose amongst extraneous matter, we wander seeking a new compass to orientate our passage. The geometric logic of the plan and the map is clearly insufficient. Its violent reduction to the homogeneous matters of mathematical certitude has little to say about the milieu that is lived and emerges through the elaboration of unsuspected directions that are simultaneously ethical and aesthetical, political and poetical.

Photographs from the edge, shot on the threshold, sustain in an instance another unplanned world. The eye travels along axes that cut and paste the urban body into new configurations. Factories by the sea, rooftop pools overlooking the docks, abandoned industrial complexes, punctuate the uniqueness of the city. Naples dissolves into a myriad of narrative that can be picked up and reworked in other metropolitan scripts. Thoroughly modern and yet thoroughly unique, denied communalities are betrayed by the overspill of the city into other accounts of time, rendering Naples unexpectedly proximate to other urban scores.

Perhaps beginning from these seemingly negative communalities – the wastelands of Occidental modernity – where excluded bodies and refused matters coalesce in counter-cities we can propose a diverse cartography, altogether lighter, more sensitive to detail and the multiple lives that give space an unplanned sense of place. Here, on the edge of the historical city of Naples, where these photos also speak of other histories that ‘world’ the city in wider currents than those the city habitually tells itself, Capasso invites us to look hard and look again. Whether we like it or not, we are forced to confront a critical revaluation, sustained by the images themselves, of the city that seeks to present itself simply in forms of self affirmation.

Unauthorised voices, spaces and lives shadow the images, push against the frame. In a sense, each and every image is a bomb. It explodes in our eyes, not in order to destroy matters, but precisely in order to renew them and ourselves as we commence once again