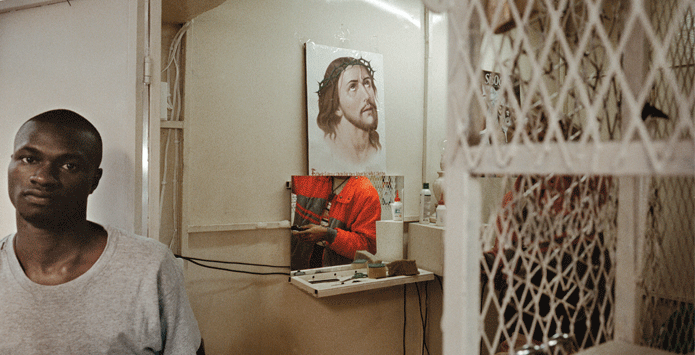 People of the sky

In 2004 Guy Tillim moved into an apartment in central Johannesburg. Over the next five months he set about recording life in the city’s cramped high-rise apartments

Guy Tillim, a commerce graduate of the University of Cape Town, began making photographs professionally in 1985. His early black-and-white work, much of it made while a member of the non-racial collective of photographers Afripix, described the civil war that engulfed many of South Africa’s townships. The decade that followed saw him live an itinerant life as a photojournalist, often drawn to documenting conflict and its aftermath, notably in Afghanistan, Sierra Leone and the Democratic Republic of Congo, a country that he has since returned to many times with his camera. Since the early 2000s Tillim has increasingly worked on self-directed projects, many of them presented in book form and supported by museum and gallery shows. Key book projects include Second Nature (2012), Avenue Patrice Lumumba (2008) and Joburg (2005), from which this selection of is culled. Rooftops, stairwells, bedrooms and balconies recur as both subject and vantage point. “The whole notion that I could create a portrait of the city is absurd,” offered Tillim in a 2010 interview by way of an insight into the difficult process of formulating his project. “So I had to rethink it all, and then realised all I had to do was be there and let the place speak for itself. I didn’t need to go along into the street and make this projection and try to create little pieces of the puzzle that would fit together, because they weren’t. The impulses of the city are just too much. They’re infinite and to attempt that in the logical sense was absurd.”

In the lead-up to his participation in the group exhibition My Joburg, hosted by La maison rouge – fondation antoine de galbert in Paris, Tillim again spoke about what—and also what didn’t—compel him as a photographer in 2004, when he hired a room on Plein Street, in central Johannesburg, and set about describing the quantum rethink of urban space brought about by the end of formal apartheid a decade earlier.

Cityscapes: You once told me that making essays for an exhibition allowed you to “follow very thin, ephemeral threads that end up I don’t know where”. What was the thread you were exploring when you started the Joburg essay?

Gut Tillim: I started off pursuing my Joburg essay in a photojournalistic vein, in other words, with the idea that I could photograph component parts of the puzzle, then put them together to create a portrait the city. After some weeks of hanging out in various situations I more or less realised the absurdity of this notion, the absurdity of compressing the infinite impulses of a city into my little projection. I was then content to attempt to create a window into a world, wherever I was would speak through me as it were. It raised some awkward questions like who am I? This is an ephemeral thread.

CS: You spent a total of five months in a rented apartment on Plein Street. What kind of daily routine did you develop?

GT: Get up, meet a friend who helps me negotiate the city with his language skills and savoir faire, explore, or not...

CS: Did you have a preferred time when you went out to photograph? Most of the photographs are daylight shots.

GT: My preferred time was day: the available light, the bustle. I would meet people unencumbered by recreational substances or weapons needed to negotiate the night. I went out once in the dead of night: lots of photos of empty streets ...

CS: The essay, although widely admired and referenced, has also been criticised for offering a bleak portrait of post-apartheid Johannesburg. Was this a point of deliberation when you were making the work, and also when it came to naming the essay?

GT: Not at all. Many people have this idea that the camera is an all seeing eye, they want to see the whole city or something that would confirm to their expectations. They beg for clichés, even though they may not know it. I know this because I used to be in the habit of supplying them.

CS: After Joburg you made photos in Kinshasa, Porto Novo, Antsiranana, Lubumbashi and Maputo. Did working in Joburg attune you to observing the ordinary rhythm of African cities?

GT: I’d worked and travelled in many African cities before working in Joburg, so no, not really.

CS: Given that you have since also photographed Rome and Sao Paulo, what value would you place on the idea of an African city as distinct from cities elsewhere?

GT: None. I’m interested in creating a window onto a world, striving to offer an equality of elements in a frame that would perhaps allow a viewer to visit that city, that place where I am. Any values I place on the idea of an African city as distinct from cities elsewhere interferes with that