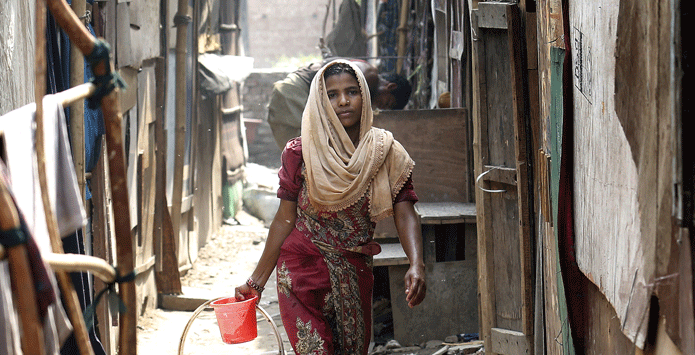 Tales at the Pump

Muslim refugees from Myanmar live in slum settlements scattered across South Asia. We profile one precarious community of mostly women, who survive along a riverbank in south Delhi

The Rohingya are one of the most persecuted minorities in the world. Largely concentrated in Myanmar, this stateless Muslim people represent about seven per cent of Myanmar’s population of 55-60 million. Yet the Myanmar government continues to deny the Rohingya any legal status or rights, insisting that they are Bengalis illegally in the country. Neighbouring Bangladesh, however, does not claim them. In the last four years, in an effort to “purify” the nation, Buddhist supremacists in Myanmar have perpetrated widespread acts of rape, arson and murder. Land has also been confiscated.

Thousands of Rohingyas struggle to survive in camps for internally displaced persons (IDP). Worse still, they are denied freedom of movement, marriage rights, jobs and access to schooling. It has prompted many Rohingya to flee the country. To date an estimated 140 000 Rohingyas have been displaced from Myanmar. Untold numbers have drowned, while slave traffickers have captured others. The luckier among them live as second-class residents in Malaysia, Thailand, Bangladesh and India, often at risk of expulsion.

India is home to roughly 36 000 Rohingyas. Ismat is one of them.

Ismat comes Maungdaw, a temperate coastal town on Myanmar’s western border with Bangladesh, and lives in a Rohingya ghetto opposite a Hindu crematorium bordering on Jamia Nagar, an overwhelmingly Muslim area in south Delhi. Life is different here. For one thing, it is far colder. I watched Ismat pour hot water in a recycled paint tin on the indoor mud stove.

“Why are you lighting a fire again?” Amina’s angry voice intruded from a shanty next door. “It is the third time today, I am choking.”

Delhi’s Rohingya ghetto was established three years ago on a plot of land measuring 185 square metres. The Zakat Foundation of India, an offshoot of a Chicago-based Muslim non-profit, owns the land. The 46 shanties on this small plot have walls of bamboo, scrap wood and metal sheets; a double layer of tarpaulin and woollen blankets serves as roofing. Since their arrival in Delhi, Rohingya men have transitioned from being farmers and boatmen to rickshaw drivers and construction workers. They have learnt the local lingo and even developed a taste for bread and kebabs, forsaking their traditional dish of rice and fish. They leave home early and return late.

India is home to roughly 36 000 Rohingyas

Life for Rohingya women living on the riverbanks of Jamia Nagar is very different. In the last three years, the ghetto’s married women have only left their neighbourhood once: when the United Nations High Commissioner for Refugees organised a trip for them to see Delhi’s famous Red Fort. It is women like Ismat and Amina who built their Burmese-style shanties with high-triangle roofs, and they who added steps in between for storage or for sleeping when the water for the nearby drain swells. (The last monsoon saw two children, aged three and five months, die from snakebites.) The indoor kitchens are a reflection of Rohingya culture; an outdoor scullery would require women to wear a veil (burqa) when cooking. There is, however, a downside to cooking indoors: the congested homes are a conduit for smoke from cooking fires.

Jamia Nagar is one of the largest Muslim ghettos in Delhi, India’s capital. Located in Okhla, a suburban colony in south Delhi, it borders Noida, an industrial city in the state of Uttar Pradesh. “Jamia” is an Urdu word and loosely translates as university. In October 1920, when India was still under British rule, several teachers of the Aligarh Muslim University, founded in 1875, responded to Mahatma Gandhi’s call to boycott pro-colonial educational institutes and established the Jamia Millia Islamia University. It initially operated out of Aligarh, later Karol Bagh, a mixed-use area in central Delhi; its foundation stone in Okhla was laid in 1935. Settlement around the university was initially slow. Okhla, then a nondescript village bordering the Yamuna River, was known as a hub for students and teachers. Shortly after independence, in 1952, the Indian government established 12 industrial estates across the country, including Okhla, to encourage small-scale industries. It is now a major production and trade centre in the capital. Okhla’s population has grown considerably, in part due to its proximity to the industrial estate and university.

Ismat did not respond to Amina’s complaint. After finishing her chores in the kitchen she returned to a communal hand pump with her son, Yusuf. Muslims from the neighbouring Rohingya and Muzaffarnagar settlements share the pump, which is painted red. The pump is a contact point for various displaced Muslims. In the last two decades, since Hindu right-wing nationalist brought down an ancient mosque in the Ayodhya, a town in the northern state of Uttar Pradesh, Muslim ghettos have been growing in size across India. The September 2008 Delhi bombings by the Indian Mujahideen further heightened anti-Muslim sentiment. Delhi police shot two bombing suspects in Jamia Nagar. In 2013, clashes between Hindu and Muslim communities in Muzaffarnagar and Shamli left over 60 people dead and more than one million displaced, most of them Muslims. Twenty families from Muzaffarnagar settled near the Rohingya ghetto in Jamia Nagar.

Neha Dixit is a journalist based in Dehli