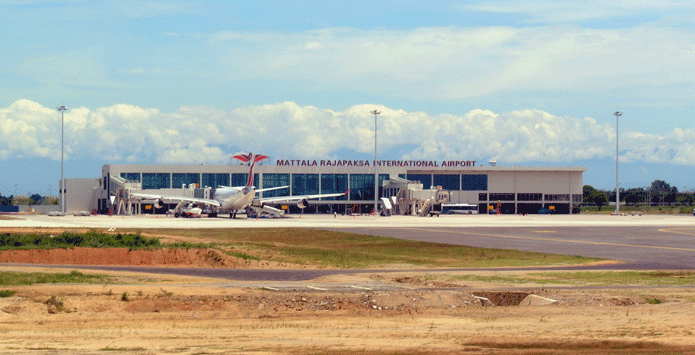 The City That Isn't

After a flurry of multi-million dollar projects, Hambantota’s ambition to become a key Sri Lankan city has stalled. What went wrong?

It is sunset, and at the Hambantota fisheries harbour in southern Sri Lanka, the fishermen are wrapping up for the day. Their boats line the beach, as they put away their nets. Mohamed Thajudeen, 45, shakes his head gravely as he points to the harbour’s breakwater—which was one among many development projects that have been taking place in Hambantota over the past decade.

“Look at that—that was built to make things easier for us, but they did it with no proper planning. They should have consulted us. We’ve been fishing here for years; we’d have been able to offer some opinions,” says Thajudeen. “This ‘development’ wasn’t done properly, and as a result, a number of boats have capsized around here in recent times.”

Thajudeen belongs to a community that, for generations, has depended on fishing for a livelihood. As he explains the series of issues that the community faces, it is evident that, for fishermen like Thajudeen, the fact that their hometown was once one of the poorest districts in the nation and now has an international airport and the second-largest stadium in the country is of little relevance to daily life. Sri Lanka is not a nation of cities. Truth be told, the island only has one ‘proper’ city—the commercial capital, Colombo. Since the country’s nearly three-decade long civil conflict ended in May 2009, Colombo and its outskirts have undergone significant changes. Simultaneously, there was also a very determined, even ruthless, effort to create a second commercial and industrial hub, in the southern coastal district of Hambantota.

Hambantota is now home to a port, an airport, cricket stadium, expansive administrative complex and convention centre, among other infrastructures. The city’s roads are some of the best in the country. Recently, the international luxury hotel chain, Shangri-La, opened a resort and spa not far from the airport. Over the last few years, Hambantota has also played host to international events, including the South Asian Beach Games in 2011, and the Commonwealth Heads of Government Meeting in 2013.

For one of the worst affected districts during the 2004 Indian Ocean tsunami, Hambantota has recovered amazingly well. In fact, it has nearly all the markings of a modern-day metropolis—except, it hasn’t quite become one.

The development frenzy that was ultimately a failed attempt to create a well-developed city from one of Sri Lanka’s poorest districts all ties back to the politics of the country’s last government—or more specifically, the Rajapaksa regime.

Despite his popularity for presiding over an end to the civil war during his ten-year rule, former President Mahinda Rajapaksa was also accused of war crimes, dictatorship, corruption, nepotism and a blatant show of favouritism for Hambantota—his home district. Strategies for developing the city were underway long before the war ended in 2009. In 2011, the Greater Hambantota Development Plan was made public.

Critics raised concerns about the viability of the proposed projects. Objections ranged from financial to environmental concerns.

There was uproar over the location of the airport, which was built in the midst of forestland. A November 2014 report in Sri Lanka’s Sunday Times revealed that over US$4 billion was earmarked for various projects in Hambantota—a significant portion of the resources of a country still recovering from a drawn-out civil war.

Following Rajapaksa’s loss of the country’s 2015 presidential election, much of Hambantota’s development drive has come to a halt. The current government has been struggling to deal with a disgruntled populace, billions of dollars of foreign debt, and overall damage control.

Ironically, the large-scale developments in Hambantota did not seem to have alleviated the city’s major challenges: poverty and unemployment remain high. So what went wrong? To begin with, Hambantota was not the ideal choice to build an airport and a seaport. According to Muttukrishna Sarvananthan, a prominent Sri Lankan development economist, much of the development in Hambantota was an “artificial effort” carried out on political and idealistic grounds.

“In my opinion, Hambantota cannot qualify as a city, because the population is dispersed,” said Sarvananthan. “The population density has to be high to attract investment, local or foreign.” Nine-tenths of Hambantota’s population of around 600,000 is still considered rural. The Greater Hambantota Development Plan depended heavily on inflows of migrants and investment, both of which did not transpire.

Forbes recently declared Hambantota’s flight hub “the world’s emptiest international airport”, and no wonder. The airport would be lucky to have more than one flight a day; international flights, for the most part, prefer to use the old airport in Colombo. The airport now exists primarily as a tourist attraction. The roads leading to it are in very good condition, if eerily deserted. As for the cricket stadium, it too now lies mostly empty, after having hosted only a handful of international tournaments.

A short drive away from all this, the people of Hambantota live the same lives they’ve been living for decades.

“What development?” asked Thajudeen. He was preparing to leave the harbour. “For us, the only change is that we now have better roads. They haven’t really done much. Life is still difficult for the people. And that port is actually a problem for us fishermen. The navy won’t let us fish near those areas anymore.”

Complaints notwithstanding, the expensive infrastructure is here to stay. Krishanthi Weerasinghe, president of the Hambantota District Chamber of Commerce, believes that something can still be done to further development. “The infrastructure is in place,” she said. “It is up to the authorities to take it forward without any personal or political agendas. If done correctly, we can bring in investors.” In the meantime, occasional groups of tourists will continue to make their way south, past the paddy fields and electric fences erected to keep elephants away, past the signboards warning of stray peacocks, all the way to the empty airport.

Maryam Azwer is a writer based in Colombo