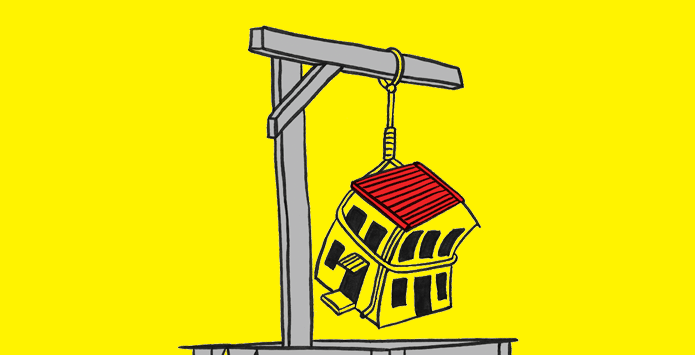 First, there were walls. In northwest Detroit, a six-foot high, one-foot thick and half-mile (or 800m) long wall still stands as a testament to the era of United States history when the racial barriers were physical as poured concrete. Constructed more than 60 years ago in order to separate a white-only community from the nearby African American neighbourhood, it’s been called “Detroit’s Wailing Wall” or the “Birwood Wall,” a nod to the street it lines, with an ear toward its long-gone counterpart in Berlin. In 1940, this wall’s construction succeeded in easing the anxieties of the US federal government, which had an expressed policy of refusing to guarantee lending in neighbourhoods of colour—or even in adjacent white developments. Today, the concrete is covered in murals and community art, and nearly all residents on both sides of the wall are black.

But although this iconic wall has been reclaimed, the system it was constructed to protect—one of physical segregation and vast economic inequality—is still well intact in the United States. Over the last six years, Wall Street banks have executed the largest property and wealth transfer—from the bottom to the top—in modern US history, and those most targeted for this theft have been communities of colour. As Benjamin Howell wrote in a 2006 issue of the California Law Review, “The new model of discrimination is exploitation ... Unscrupulous lenders now prey on a history of racial redlining by aggressively marketing overpriced loan products with onerous terms in the same neighbourhoods where mainstream lenders once refused to lend.”

Take, for example, the experiences of Bertha Garrett, an author and grandmother who lives only a few miles from the Birwood Wall. In 1998, she and her husband took out a second mortgage for $45 000 on their home in northwest Detroit, decades after federal legislation made the lending discrimination that the wall embodied illegal. Garrett paid her mortgage each month, even though by the mid-2000s this predatory loan had ballooned to a staggering $190 000. Up went her monthly payments: $900, $1100, $1300. Garrett and her husband, William, were elderly; they leaned on their children for help paying.

As they scraped together the monthly payments, three of the nation’s largest banks—Bank of America, Wells Fargo, and SunTrust Bank—were under investigation by the US Department of Justice on charges of widespread and institutional lending discrimination for steering African Americans, even those with good credit, into unpayable, predatory loans. During the recent housing boom, African Americans with high credit scores were three times more likely to be sold predatory loans than white Americans of the same credit rating. Mortgage companies used such intentional strategies to target African Americans and other people of colour; according to one former Wells Fargo loan officer, the company put “bounties on the heads of minority borrowers.”

Garrett’s mortgage payments jumped to $2500 a month. Her daughter, who was helping with the payments, was laid off at work. The bank kept selling the mortgage note from one servicer to the next; Garrett could barely keep up with where she should send the checks. For five months, the two families scraped together the monthly payment of $2500. Then, finally, they could no longer pay. “Lord, I am sinking,” Bertha scrawled in tight handwriting in one of her many notebooks filled with poems and gospel songs. “My husband is blind, we are without money and have no way to pay.” Just before Christmas in 2010, Bertha found a notice of foreclosure posted on her front door.

Bertha Garrett is one of millions of people who have been ensnared in a mortgage industry so vast and convoluted that when it collapsed, it threatened to take the world economy down with it. Since 2007, an estimated ten million Americans have been displaced through bank-pursued foreclosure from more than four million homes across the country, affecting families of every race, ethnicity, religion and class level. Ten million people—that’s every man, woman and child in all of Cape Town and Johannesburg, and half of Durban.

Still, even though the effects of foreclosure have afflicted every corner of the United States, communities haven’t been impacted equally. African Americans have been twice as likely to be foreclosed on. What’s been most overlooked in our reporting on the crisis is how this disproportionate effect is part of a longer historical trajectory. As I wrote in a recent feature about racially tilting foreclosures in Chicago, from enslavement to sharecropping, redlining to restrictive covenants, the United States has too often been an inhospitable land for people of colour. Today, some communities across the country are choosing to fight back.

When I went to visit Bertha Garrett in her home in northwest Detroit, there was no foreclosure notice on her door. Instead, only weeks earlier, she had signed the paperwork to own the home outright after enlisting the help of anti-foreclosure groups, her church community, local union chapters and the local newspaper. Nearly a hundred people had amassed on her front lawn on the day of her eviction, turning around the city’s dumpster truck that had been contracted to haul away all of her and her family’s belongings. Others had protested outside her bank’s headquarters in the bitter Michigan cold, while she lay in the office doorway and refused to move.

Laura Gottesdiener is a journalist and social justice activist based in New York. This writing is adapted from her book A Dream Foreclosed: Black America and the Fight for a Place to Call Home (Zuccotti Park Press, 2013)