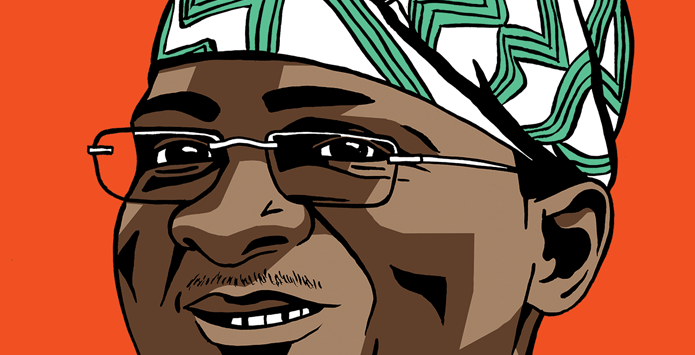 The Labours of Mister Fashola

As the thirteenth governor of Lagos State and de facto mayor of the city of Lagos, Babatunde Raji Fashola, a soccer loving former lawyer was hailed as a “rare example” of a civic leader. He spoke to Ore Disu in 2012

Lagos is a city in transition; telltale signs of its evolution are everywhere. Blue-canopied bus stops flank the lanes exclusively dedicated to its recent mass-transit facility. Street sweepers, clad in neon-orange, labour beneath flyovers and along major thoroughfares. Spaces once occupied by guerrilla market stalls have now been colonized by an eclectic array of sculpted foliage. Even the ubiquitous portrait of a city jam-packed with motorists is fraying at its edges. Traffic flows, albeit not as freely since the recent ban on motorcycle taxis (or okadas) compels more private vehicles to the road. A reformative process is reshaping Africa’s largest and most notorious city, and nowhere is this more evident than on its streets.

The most visible and keenly felt changes in Lagos have been attributed to the serving governor: Babatunde Raji Fashola. Already halfway through his second term, Fashola is regarded as one of the few exceptions among the plethora of lacklustre administrators, past and present. Despite being the youngest serving governor, Fashola’s considerable success and fast-tracked ascension to the most contested seat outside the presidency comes at little surprise: he was born— in 1963—into a family closely connected to traditional strongholds of power. As a law student at one of Nigeria’s most prestigious universities, he earned honours before cutting his teeth as a litigator, a position he held for over 15 years. By the time of his formal appointment in May 2007, Fashola had already sat on numerous state councils and distinguished himself professionally as a senior advocate. More importantly, he served in the prominent role of chief of staff to his predecessor and political godfather, Bola Tinubu, earning his candidacy vote for the incumbent Action Congress party. If any doubts remained, his wide-ranging legal experience, standing as a fifth generation indigene and Tinubu-backed campaign were enough to confirm his political prowess and dispel fears of his allegiance.

Historically, Lagos has been lucky, securing a more attentive stock of administrators than other Nigerian cities, even under successive military regimes. Yet it was not spared the consequences of structural adjustment and political instability. Many of its inhabitants have spent the last two decades having to cope with besieged public services, unbridled crime and crumbling infrastructures. From a mere cluster of fishing villages in the fifteenth century, Lagos has grown into a congested metropolis that is home to an estimated 18 million people, many of them living in relative poverty. In other parts of the world, a city the size and complexity of Lagos would have its own mayor. Fashola, however, is both governor of Lagos State and the unofficial mayor of its metropolitan area, which accounts for 90% of the state’s population. This arrangement, based on a reluctance to devolve power further and the ceasefire politics with the federal government, creates challenges in managing parallel investments in outlying suburbs and the demands of political participation in the capital.

Regardless of local dynamics, Lagos increasingly commands global attention. It is home to the largest banks and financial institutions in sub-Saharan Africa and its industrial and commercial activities reportedly account for a significant chunk of Nigeria’s non-oil GDP. Demand for a piece of the action is great. Even with security concerns, many wealthy patrons and foreign multinationals are responding to the allure of high returns and virgin fields for investment. But while Lagos offers a dynamic business climate for entrepreneurs, unemployment remains a major challenge. Young graduates, frustrated by the kick of opportunities for professional advancement, often take on menial roles: tailoring, driving taxis, hairdressing or working as a cashier. Their chief competitors are west African migrants, who, wooed by the city’s bright lights and vibrancy, soon find survival in Lagos requires enterprise and wit, if not sheer bravado.

Fashola is no stranger to the myriad of issues plaguing the city and by no means shy in his resolve to address them. Since assuming office, the governor has raised over $1.2-billion through over-subscribed bonds for infrastructure and noticeably cleaned the city of grime and crime. He has removed unreliable cars and drivers off the road, patched up hundreds of potholed motorways and set up a Bus Rapid Transit system patronised by 200,000 people everyday. In a bid for coverage, his agencies have also rehabilitated courts, classrooms and hospital wards. As a result, the portrait of the city and perceived performance of its leadership is changing. Local newspapers anatomise his exploits—the overhaul of road culture, the introduction of an inner-city rail network, his conscientious makeover of primary education and strides to improve specialist care in a country with the highest newborn and maternal death tolls in Africa—and the public’s responses to them.

While no government boils down to just one individual, the directives developed under Fashola’s watch reveal much about his personal stance towards development. His neo-liberal economic approach favours wealth creation over inclusion, growth over redistribution, and effectiveness over equality. His city-marketing campaigns are one of many bold steps taken to put Lagos on the global economic and cultural maps. His public service upgrades garner $96.5-million a month, while reforms of property, land and consumer taxes have brought an additional $11.8-million to the state’s coffers, quadrupling the 1999 revenues. This jointly equates to more than 50% of its dividends from the capital. Together with public-private partnerships, such actions free the city from the mire of oil-driven politics and afford its administrators more leeway to sustain and dictate their own development priorities.

However, Fashola is not immune to criticism. Taxpayers have higher expectations and unequal gains have been noted amongst local residents. The current policies and practices reveal “exclusionary patterns of metropolitan administration,” said Victoria Ibezim-Ohaeri, director of local watchdog Spaces for Change. Her criticisms hinge on projects like the Eko Atlantic City, a proposed $6-billion annex to the city’s current business district, which will be housed on a 10km2 artificial island off the Bar Beach coast. A flagship development, it proposes to be “everything that Lagos is not”—a futuristic enclave fully fitted with high-end apartments, world-class transport, public squares and uninterrupted electricity. This, argues Ibezim-Ohaeri, is in conflict with the prerogative of inclusion and environmental protection. “Official insensitivity to the plight of the poor has been effectively masked as ‘formality’ and ‘orderliness’,” she said. “No doubt, some of Fashola’s interventions programmes may have fine intentions, but good intentions are meaningless especially when the non-inclusive and elitist colorations ... increase the number of people struggling for access to basic urban services.”

Ore Disu is a founder of Nsibidi Institute, an urban research organisation based in Lagos