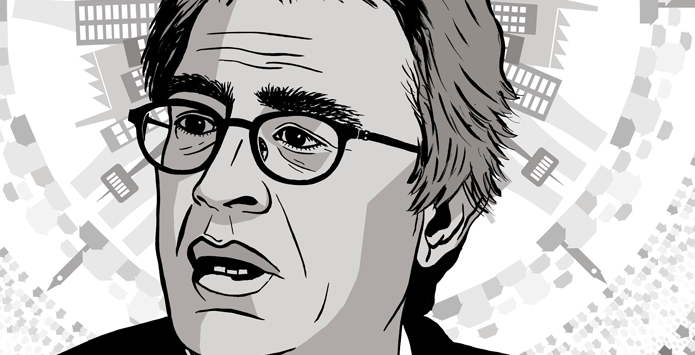 The Scopic Regimes of Urban Neglect

We are living in an era marked by many dystopian visions of the future, says distinguished urbanist Ash Amin. Upending them will require work, he tells Matthew Gandy in a wide-ranging discussion that also assesses the contemporary neglect of the urban poor, their infrastructural rights, as well as the use of big data and smart technology in managing cities

In 2003 UN-Habitat warned that by 2030 around a third of the world’s nine billion humans could be suffering from multiple deprivations, living in slum-like conditions in the world’s cities, many located in the global south. Urban attention is beginning to turn to this problem, and to questions of sustainable urban competitiveness and growth, albeit without much reference between agents focused on growth and urban privation. In his keynote address at the 40th World Congress of the International Institute of Sociology, held in Delhi in February 2012, Ash Amin introduced the idea of “telescopic urbanism”. The city of the future, he noted, is being looked at through the wrong end of the binoculars: while “business consultancy” urbanism is largely disinterested in the city that does not feed international competitiveness and business growth, “human potential” urbanism largely focuses on settlements where the poor are located for bottom-up solutions to wellbeing. Ideas of mutuality, obligation and commonality have all but disappeared in this new paradigm, the mechanics of which is the starting point of this conversation between Amin and Matthew Gandy.

Matthew Gandy: I’d like to begin by asking you about your essay “telescopic urbanism” (“Telescopic Urbanism and the Poor”, City, forthcoming 2013). Do you want to tell me more about how you use that visual metaphor?

Ash Amin: The title appeared in the middle of a paper on the urban poor in the developing world, when it dawned on me that the kind of argument I was trying to make about the contemporary neglect of this very large section of humanity might have a lot to do with the emergence of a dominant optic of the city as all but a single, connected, interdependent entity. This is when I thought that this piece ought to be called “telescopic urbanism”, and from then on, like any suggestive metaphor, the title acted as a prompt. The metaphor got me to think about the implications of seeing the city only in its parts, through the wrong end of the telescope. Particularly today, as cities around the world are trying to muscle up, gear themselves up for international competitiveness and the like, telescopic urbanism—as both imaginary and code of practice—regularly bypasses the poor, casting them as not part of the urban central, but as part of the urban peripheral, or another world. The metaphor became a way of forcing a thesis on urban neglect: if today the majority city and its needs are ignored by elites—perhaps also scholarship—it is because it is placed out of sight, and for this, forgotten or made anomalous, allowing the city of the thrusting few to colonise the gaze, claim the urban.

MG: In the paper you mention a contrast between what you call “page turning ethnographies” and “voyeuristic hyperbole”. Can you elaborate on that tension between different modes of representing urban poverty?

AA: Yes, I wanted to bring out the contrast between two kinds of ethnographies of the poor that are becoming all the rage at the moment. On a good day, page turning ethnographies of slums and the everyday city by novelists and journalists manage to tell a compelling story of the poor, and the city at large, without reducing fortunes and lives to just these actors. They might focus on particular neighbourhoods or particular lives, but still manage to weave into that story resonances from elsewhere, such as the city’s labour market geographies, the symbolic and affective atmospheres of place, the networks of exchange, remittance or longing that stretch back to villages and other continents, the impositions of the authorities and urban elites, the very ecology of dwelling, metabolic flows and infrastructural provision. These accounts somehow manage to capture the complexities confronting the poor as well as the fullness of their subjectivities and experiences, as it were, in a gesture and sweep. I am thinking of the likes of Suketu Mehta and Katherine Boo on Bombay, or Ngugi wa Thiong’o and Binyavanga Wainana on Nairobi, who manage to narrate the seen and the unseen, the experienced and the imposed, the particular and the general, all in really insightful ways—ways that scholarship on cities often struggles with. They move the telescope steadily, they focus in and out, they return to things missed the first time.

Then we have more voyeuristic accounts of the urban poor, often written by celebrated journalists and opinionated experts. They parachute into a slum, stay there a few days, move off to another one in a different country or continent without waiting to form a nuanced picture of the everyday life of the poor or of their complex formative geographies and histories. They succumb to projecting from the few empathies built and insights acquired, and reducing complexities without a clear narrative or purpose to clear singularities that tell a good story. The upshot is a voyeuristic and often very crude summary of what was seen and heard in a week, and then when the comparisons have been made, the lives of the poor here and there are woven together around a set of easy metaphors, so that the poor can be narrated as survivors, entrepreneurs, clean, jolly, or their opposites, and so that a given location—including a slum with nearly one million people in it—can be spoken of in clear and general terms, without a huge amount of evidence or even literary imagination. It would be invidious of me to name names, but imagine the book equivalents of films like Slumdog Millionaire.

AA: I was trying with difficulty to retain something of Henri Lefebvre’s idea of the city for all, which seems the right ambition to have for vast sections of the urban population without basic rights. At the same time, I was troubled by this idea, because in today’s city of 5-10 million people, in which perhaps a third of the inhabitants are non-citizens, undocumented migrants, barely recognised as humans let alone burghers, to speak of generalised rights of urban being and participation seems unrealistic. Still, dissatisfied with the shift today in political economy away from a discourse of rights to one of capabilities and empowered subjects, I wanted to not abandon the principle of universal access to the basics of life, because without such access, even the discourse of capabilities and empowerment rang hollow—a bitter promise, and wild expectation. I came to the conclusion that a realistic way forward might be the promise of access to a commons available to all, including the poor, more specifically, access to the basic infrastructures of life, from water and sanitation to primary healthcare and education.

Matthew Gandy (b. 1965, London) is professor of geography at University College London and was director of the UCL Urban Laboratory from 2006-11. His publications include Concrete and Clay: Reworking nature in New York City (2002), Hydropolis (2006) and Urban Constellations (2011) along with articles in New Left Review, International Journal of Urban and Regional Research, Society and Space and many others journals. He is also actively involved in local issues in Hackney, east London, where he is a member of Hackney Biodiversity Partnership.

Ash Amin (b. 1955, Kampala) is 1931 Chair of Geography and Fellow of Christ’s College at Cambridge University. Until 2011 he was professor of geography at Durham University and executive director of the Institute of Advanced Study. He is known for his work on various aspects of the geography of modern living: urban and regional society as relationally and materially constituted; globalisation as an everyday process; the economy as cultural entity; and the prosaics of race, racism and belonging. He is currently working on a book on the world seen through the eyes of the city. His most recent books are Land of Strangers (2012) and Arts of the Political: New Openings for the Left (2013), with Nigel Thrift.