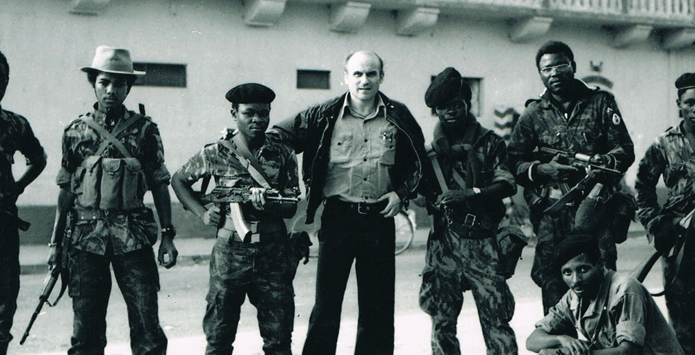 Ryszard Kapuscinski has been praised as a conjuror extraordinaire of modern reportage, and also dismissed as a profound and dangerous racist

In 1967, following a period spent living in central Lagos, in a neighbourhood of “wretched” little houses, clay huts and slums, the Polish journalist Ryszard Kapuscinski, then still an unknown figure in the Anglophone literary world, returned to Warsaw, where he was promptly hospitalised. He had contracted a tropical infection while reporting on events in Central and West Africa for his employer, the Polish Press Agency (PAP), which he joined in 1962. At the time he was PAP’s only permanent correspondent in sub-Saharan Africa, a “first of its kind” job for a reporter from the impoverished communist state. After his convalescence, Kapuscinski returned to PAP’s administrative offices. “I felt smashed inside,” he writes in The Soccer War (1990), an episodic, sometimes essayistic collection of journalistic despatches and biographical notes from his two decades as a foreign correspondent in Africa, Latin America and the Middle East. “I wasn’t suited for anything; I wasn’t in touch; I wasn’t there.” The solution: a desk job.

“You’re going to work here,” the roving reporter’s longsuffering boss, Michal Hofman, said, indicating a workspace. Kapuscinski, born in 1932 in a small Polish industrial town in present-day Belarus, suspiciously appraised his future work area. “I looked it over: the typist—yes, she was nice; the desk—abominable.” Rather than leave it there, Kapuscinski uses this desk as the subject for a three-page jam session, which he kicks-off by describing the desk as “one of those small desks, a mousetrap, which sit by the thousands in cluttered and overcrowded offices”. He shortly adds: “Behind such a desk, a man resembles an invalid in an orthopaedic brace.” A page later, still exploring the same ecstatic riff, he offers: “I am no enthusiast of furniture … Furniture divides man from man; people cower behind furniture as though behind barricades; they disappear into furniture like birds into holes.” And so he continues, thrumming a rhythmic chord, in the process transforming a banal encounter into an enduring meditation on office life.

Kapuscinski, who reported with verve and insight on revolutions and war, men in power and those without, often assuming a partisan, anti-American attitude that betrayed a kind of rebellious humanism occasionally at odds with the international socialism he espoused, was not suited to being a desk journalist. Recycling news reports from elsewhere, no, that was not for him. “To look, to walk around, to ask, to listen, to sniff, to think, to write,” he writes in The Soccer War, summarising the things that compelled him as a reporter. He more or less says the same thing in Travels with Herodotus (2007), his late-career assessment of the Greek historian. “How does Herodotus work?” asks Kapuscinski. “He is a consummate reporter: he wanders, looks, talks, listens, in order that he can later note down what he learned and saw, or simply to remember better.” In a book that also functions as an unreliable autobiography, Kapuscinski selectively paraphrasing the details of his professional career, he often ends up describing himself more than his profile subject—particularly in those passages where he celebrates Herodotus as an “inquisitive romantic” and “diligent student of the impractical”, or praises his “phenomenal memory”.

Kapuscinski, who reported with verve and insight on revolutions and war, men in power and those without, often assuming a partisan, anti-American attitude that betrayed a kind of rebellious humanism occasionally at odds with the international socialism he espoused, was not suited to being a desk journalist

No, a desk job would really not do. And yet, as the many late career portraits of Kapuscinski floating about the internet suggest, he did a lot of penance behind a desk. Nothing unusual. That is what writers do: sit on chairs and write at desks, often for long periods of time. Kapuscinski’s impassioned tirade against the desk is simply a conceit, a device to explain his will to be an “authentic traveller” and writer who wishes to “experience everything at his own cost” (The Soccer War). It also, unavoidably perhaps, casts him as the perennial boy reporter. The allusion to Tintin is intentional.

In the early 1950s, roundabout the same time Herge’s fictional boy reporter was navigating a mountainous border landscape in a fictionalised Eastern Europe, in The Calculus Affair (1956), outwitting police and Cold War intelligence operatives at the same time, Kapuscinski was doing something vaguely similar. He started his career as a cub reporter at Sztandar Młodych (The Banner of Youth), a mouthpiece for Poland’s communist youth organisation, his job to physically, or rather bodily follow up on letters sent to the editor. “I rattled along from village to village, from town to town, in a hay cart or a rickety bus, for private cars were a rarity and even a bicycle wasn’t easily to be had,” explains Kapuscinski in Travels with Herodotus. This poverty of means would become a hallmark of his professional career, defining everything from his choice of foreign digs to his working without translators and always struggling to send his despatches back home. Crucially, it also came to define the orientation of his later literary reportage, which often places as much emphasis on the difficulties getting around, for instance into Congo after the fall of Belgian rule and the murder of Patrice Lumumba, as the news event itself.

Rattling around the Polish countryside at low speed, more Huck Finn than Tintin during his early career, Kapuscinski reported on things that, a few years earlier, had been completely verboten. The empty shelves in a proletariat village, for example, and, famously, the poor living and working conditions at a model socialist municipality. While the political thaw brought about by Stalin’s death allowed journalists greater wiggle room when sketching scenes of everyday life in a communist state, Kapuscinski’s latter report, published in 1955, initially earned him censure. His facts, those malleable things journalists everyday marshal into something approximating a verifiable truth, were disputed. The facts, however, stood their ground, and Kapuscinski was presented with a civil state award. He was 23.

Sean O’Toole is a journalist, author and co-editor of Cityscapes Magazine