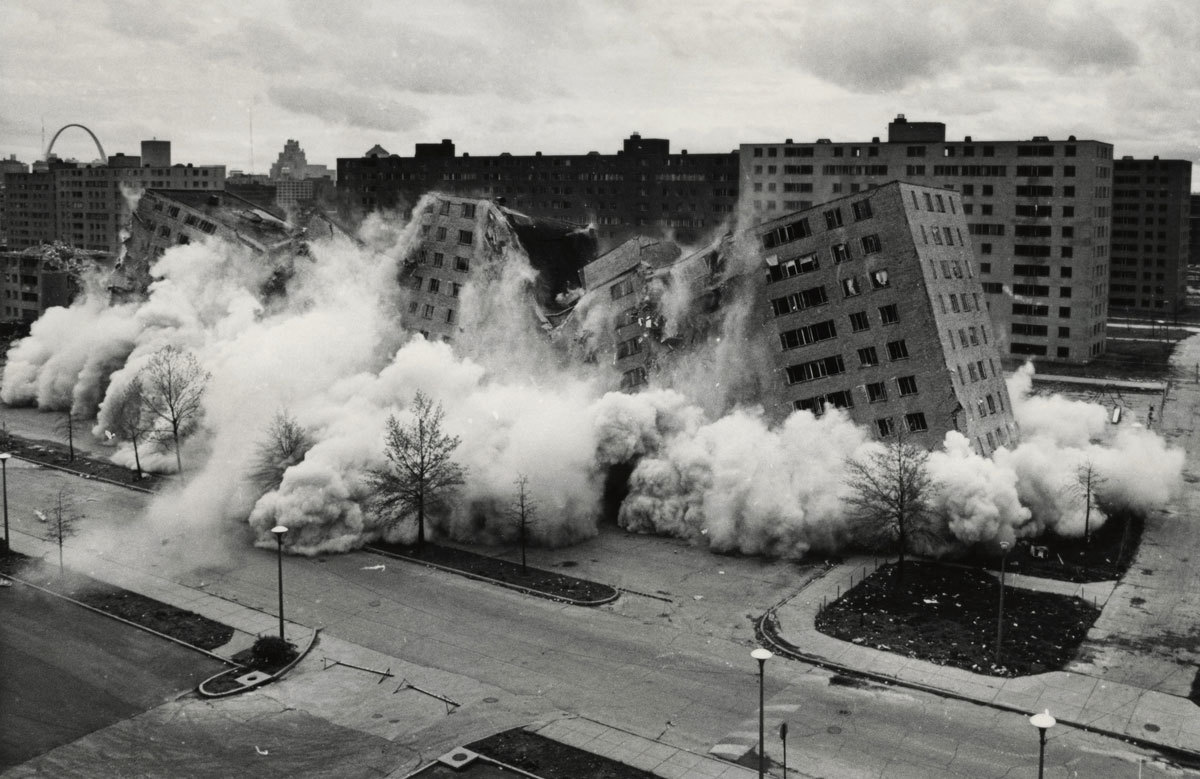 Completed in 1955 and named after two well-known St. Louisans—Wendell O. Pruitt, an African-American fighter pilot in World War II, and William L. Igoe, a former US Congressman—the Pruitt-Igoe comprised 33 apartment buildings, each 11 floors in height. The complex was 91% occupied at its peak in the late 1950s; by 1971 it housed only 600 people. “I never thought people were that destructive,” remarked Yamasaki on Pruitt-Igoe’s degraded status before its demolition.

Drawing on historical footage, some of it from the highly publicized demolition, documentary filmmaker Chad Freidrichs took four and half years to make The Pruitt-Igoe Myth (2011), a vivid account of life inside this contradictory symbol of architectural rationalism. The documentary investigates some of the urban legends that have sprung up around the complex. “We know that many of the residents had diverse experiences in Pruitt-Igoe,” Freidrichs said in 2011 interview. “Some turned to crime, as is the legend, and others lived very profitable and normal lives in Pruitt-Igoe.”

The film reveals how Pruitt-Igoe formed part of a larger urban renewal project in the St. Louis region, in effect debunking the idea of it as “a stand-alone entity,” to quote Freidrichs. His documentary is however far more than just a story about the dreams and failures of modernist architecture. While design oversights and local government politicking underpinned the Pruitt-Igoe’s spectacular failure, Pruitt-Igoe’s inhabitants defined the building’s use and function—fittingly, it is the complex’s former residents who narrate this tale of American optimism and marginality.

Freidrichs, who launched his filmmaking career in 2003 with the non-fiction work Jandek on Corwood, a documentary about a blues-inspired folk rock musician from Texas, stumbled on the story of Pruitt-Igoe while researching decorating tips for his mid-century style home.

“In the process of researching modern architecture, I came across Pruitt-Igoe,” he explained. “It was fascinating to me because encoded into this idea of modern architecture was the idea that you could have social change come about and Pruitt-Igoe was viewed as this failure of it. And then slowly as I researched it I came to decide it was a much deeper story than an architectural one.”

Freidrichs is not alone in his interest in the failure of Pruitt-Igoe. Chicago artist Michael Rakowitz has repeatedly incorporated its legacy into his work. In 2005 he produced a large inflatable replica of Pruitt-Igoe, which he surrounded with a viewing platform, enabling viewers to watch the soft sculpture repeatedly inflate and deflate. More recently, in 2012, he displayed brick fragments from Pruitt-Igoe alongside bits of stone retrieved from the destroyed World Trade Centre, another of Yamasaki’s buildings.

Demonstrating the intimate link between creation and destruction, Rakowitz’s Documenta 13 installation What Dust Will Rise? also included: pieces of stone dropped onto German towns by British air force squadrons as a prelude to the retaliatory bombings that followed; carved stone sculptures depicting destroyed Christian and Jewish books; and fragments of stone from the Buddhist sculptures destroyed by the Taliban at Bamiyan in Afghanistan.

The failure of Pruitt-Igoe and similar rationalist exercises in vertical social housing—including the notorious Aylesbury Estate in south London and former white working class tower block residences of Kruger Park and Schubart Park in Pretoria (see p.35)—has inadvertently ended up sponsoring a kind of micro-genre. Tracing its origins back to the eighteenth century European obsession with ruins, which manifested acutely in painting and poetry, this failure interested contemporary form is marked by its gritty urban context and hesitancy towards epiphany.

The examples are quixotic. In 2009 artist Roger Hiorns soaked an abandoned council flat in soon-to-be-demolished social housing complex in south London with 90,000 litres of copper sulphate solution. The liquid, which covered every part of the flat’s interior, eventually hardened into deep blue crystals. Visitors were able to enter the magically transformed environment for a brief period. It was a fitting memorial to a modernist ideal that, in its western incarnation at least, perished on a 23-hectare plot of urban land in Middle America.

Tau Tavengwa is the editor, co-founder and publisher of Cityscapes Magazine