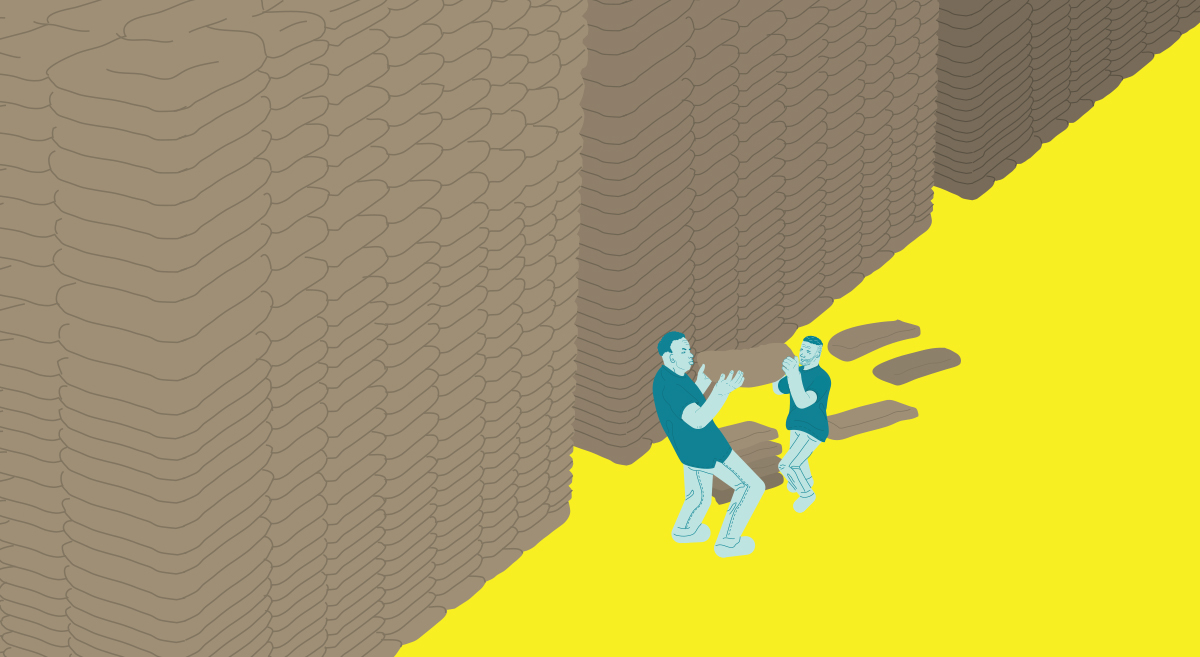 There is something about cement—and the way it can be mixed into concrete—that captures the imagination. At the moment, Africa is the continent with the fastest growing cement consumption and demand is expected to rise by 50% by the year 2020, according to a 2015 Bloomberg report. The cement industry has even described sub-Saharan Africa as “the last cement frontier” (Waerp and Arnoldson, 2011). Some speak of cement as the “new oil” while others refer to the richest man in Africa, the Nigerian businessman Aliko Dangote, as the “king of cement” (Agbugah, 2016). With the growing number of cement factories opening across Africa, the continent is unlikely to remain a net importer of this crucial building material for much longer.

All this cement is not only channelled towards projects of futuristic satellite cities, shopping malls, tower blocks and ring roads, but also towards the millions of small domestic construction projects that are increasingly visible on the peri-urban landscape. Drawing on research in Inhapossa, an expansion suburb in central Mozambique, I approach cement as both an index and a driver of socio-economic transformation in the region. I further show how, as a politically and affectively charged material, cement offers a useful vantage point from which to examine the contours of prosperity.

After spending the last few decades uncovering the roots of uncertainty and documenting the different creative ways in which people get by in trying environments, scholars interested in Africa have developed a wealth of concepts and tools to make sense of how people tackle and engage with adversity and frustrated aspirations. But what happens when conditions on the ground start changing, seemingly for the better; when economic growth begins to trickle down? While there is ample reason to qualify the “Africa rising” thesis proposed by The Economist in 2011, it seems more difficult to dismiss all this excitement about cement as mere hype; more difficult to ignore the building boom that is fuelling, and to some extent also fuelled by, the rising demand in cement.

Prosperity is commonly assessed by its signs and symbols such as economic growth, investment in infrastructure; but prosperity, like well-being more broadly, is also experiential. Prosperity, in short, has its own materialities and temporalities. It also tends to be aspirational, something to strive towards, and often, especially when the focus turns to the global South, something that needs to be promoted.

With the growing number of cement factories opening across Africa, the continent is unlikely to remain a net importer of this crucial building material for much longer

Here, I am more interested in the materiality of prosperity than in prosperity as an ideal.

It is my contention that prosperity, like crisis and poverty, for example, deserve academic attention. Instead of simply qualifying the “Africa rising” thesis, or dismissing it all together, I propose to take prosperity seriously. Although I recognise that far too many in Mozambique live in abject poverty, I wish to give prosperity the benefit of the doubt. To do so, I ask what the vast quantity of cement that is being imported, manufactured, invested in, dreamt about and ultimately mixed into concrete can tell us about the contours of prosperity.

If building a house is every young person’s dream and a key marker of adulthood across sub-Saharan Africa, for many it has become, at best, a deferred dream, as young people throughout the continent struggle to get by, let alone become able and respectable adults. Over the last decade, I have seen young people in southern Mozambique devote much time and energy to worrying about their bleak prospects. However, when these same young adults, started making blocks in earnest and relocating to Inhapossa, it became evident that the “crisis of social reproduction” framework no longer gelled with the realities I encountered on the ground.

The growth of Inhapossa owes, in part, to a happy combination of demographics and new opportunities. Among the children of refugees who fled to the city at the height of the war in the late 1980s, many have since graduated and a number have recently secured jobs as teachers, police officers, administrators and technicians. Their story is turning into a rather happy one.

Across the suburb of Inhapossa, there are piles of neatly stacked concrete blocks everywhere, increments towards the materialisation of particular building dreams. In recent years, “making blocks” (bater blocos) has shifted to the forefront of local concerns. Everyone, from civil servants to day labourers, seems to be buying cement and making blocks. In fact, people talk about making blocks and building, more broadly, as being “in fashion”. Overlapping geographies of labour migration, Portuguese colonial rule, civil war and a brief socialist period, shape how Mozambicans reimagine the city towards and from suburbia.

Mozambicans have long engaged with cement as a politically and affectively charged material. Colonial cities were commonly built on the divide between the cement and the reed city, the former for settlers and the assimilated few, the latter for the indigenous population. Across the continent today, decaying infrastructure stands as reminders of more prosperous days, as reminders, also, of what could have been; in southern Mozambique, decaying art deco buildings recall the prosperous days of Portuguese colonial rule. Amidst this decay, however, are freshly moulded concrete blocks oozing with promises of a better future. Indeed, it is only recently that cement has become so accessible.

Construction, more broadly, is entangled in claims of belonging and citizenship, and involves making a powerful statement about how actors—individuals, families, municipal governments—project themselves into the future. Anthropologist Morten Nielsen has written extensively about this. He argues that the sub-contracting of large infrastructure projects—many of which are funded by Chinese capital under the banner of “resources for infrastructure” deals—highlights the weakness of the state and testifies to the “retreat of sovereignty”, to use anthropologist Charles Piot’s formulation. In this view, these projects merely participate in the spectacle of the state, a state subsisting on performance. But I find it more useful to approach nation-building as a dialogue between the state and its citizens; a dialogue expressed in the language of cement.

In Mozambique, infrastructure projects trigger anything from measured excitement to cynicism. They never pass unnoticed. “The state is working,” I have heard people say on numerous occasions. That the tendering process is tainted by corruption is not lost on anyone, but the state is working, doing something tangible, moving the country forward, despite its shortcomings in other areas, including, in fact, in the area of infrastructure. In Inhapossa, while everyone is busy “making blocks”, the municipal government has recently started paving some of the city’s main arteries. Residents are enthusiastically hopeful: “One day we’ll no longer have to walk on sand!”, I was told.

In this era of growing prosperity, there seems to be more at play than performance and spectacle. I think that behind the façade, behind what Andrew Apter calls the “empire of signs” (2005), lies something more substantial, possibly more enduring. At play, at least in part, is a growing emphasis on transparency and accountability, and also a revived faith in progress and modernization. Meanwhile, by investing in cement and eventually by building, Mozambicans insist that they are doing their part in helping the country move forward; in helping Mozambique look beautiful. Whether academics agree or not on measuring prosperity through its signs and symbols, this is often how everyone else assess prosperity and progress.

If the end of the Cold War marked, as Piot suggested in his book Nostalgia for the Future (2010), “a real break from the colonial system of governance,” especially following the drying up of Cold War monies, then I think it is time to look at the so-called global financial crisis as an important threshold in Africa, which as a whole, has emerged rather unscathed in comparison to the north Atlantic economies. The growing popularity of reverse migration, as it is sometimes referred to, whereby Europeans seek their fortune in former colonies—scores of Portuguese nationals have, for instance, immigrated to Mozambique and Angola in the last few years—certainly speaks to significant global reconfigurations.

Much of the growth in Mozambique, like in Angola, has been fuelled by the exploitation of oil and gas reserves and is therefore ineluctably volatile. Renewed fighting along the national highway, along with civil unrest, are reminders of just how tenuous this prosperity is. Scholars like Jason Sumich, who focus on the Mozambican elite, speak of the “uncertainty of prosperity”. It remains unclear how recent developments, such as the “secret debt scandal” which exposed secretive loans totalling $1-billion that led the country to default on debt repayment, will affect living conditions and opportunities.

For the young people I have been following for over a decade, however, things at this specific juncture are definitely improving. I hear narratives of frustrated aspirations and nostalgic idealization far less these days than I did only a few years ago. Prosperity rather than crisis has come to dominate local narratives. Prosperity inevitably comes with new (and sometimes not so new) dependencies, exclusions and interdependencies, and China’s recent economic slowdown may prove to have far reaching consequences. Questioned on this very issue in a 2015 interview, Aliko Dangote, who has probably done his market research, said: “We don’t think that short term. Africa will be building for decades.” As an increasingly powerful medium, cement simultaneously indexes and drives prosperity. Cement, in short, is the thing of now.

Julie Soleil Archambault is an assistant professor in the Department of Sociology and Anthropology at Concordia University, Montreal