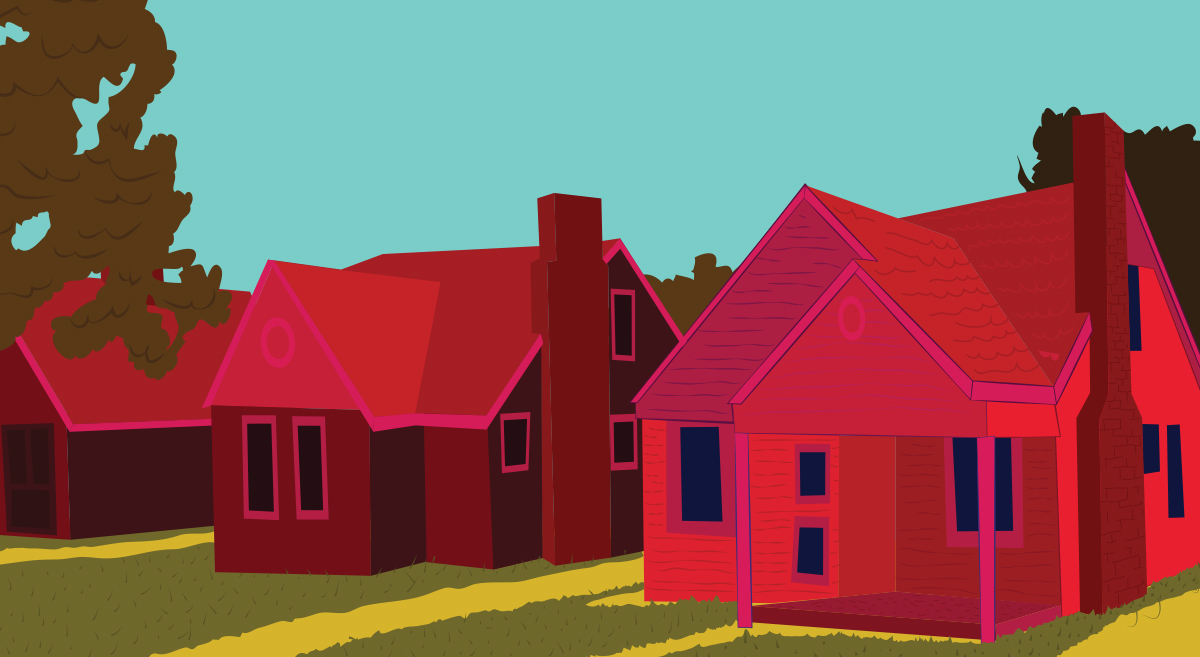 If the African middle class is growing, how is this group shaping contemporary urban landscapes? I sketch out an answer by looking at the relationship between middle-class growth and suburbanization in Dar es Salaam, Tanzania. The middle classes and the suburbs are mutually constitutive in contemporary urban Africa. Processes of circulation and accretion involving land and housing shore up claims to middle classness at the same time that they produce distinctive suburban landscapes in what was, 20 years ago, the peri-urban edge of the city.

These suburban landscapes have emerged in an arc about 20-30km to the north and west of the city, in places such as Bunju, Goba, Kimara, Segerea and Wazo. Dar es Salaam has had suburbs, defined by single houses in individual plots, sometimes surrounded by a garden or a wall, since at least the 1970s with sites and services schemes in the (now) inner suburbs of Sinza and Kijitonyama, about 10-15km from the city centre. These places have since undergone low-rise densification (subdivided plots, larger building footprints on plots) and the frontier of suburban growth has subsequently moved outwards into the city’s former peri-urban hinterland. Low-density residential neighbourhoods dominate these suburban spaces. The housing is characterised by detached bungalows and villas, surrounded by gardens and enclosed by walls. However, these houses are self-built—they are not the large planned housing schemes built and then sold by developers that are underway along Dar’s coastline.

The emerging suburbs are dominated by the middle classes, but not (yet) exclusively so.

New and distinctive lifestyles are evident in Dar es Salaam’s suburbs, characterised by the house as a site of display and consumption, a preference for English-medium private schools and a reliance on the private car, which partly explains the grinding daily commute of up to three hours to the city centre. Those who do not work in town avoid the city centre altogether and conduct all of their shopping, banking and social activities locally. Daily groceries and fresh foods, baked goods, pharmaceutical products, livestock feed, building materials, clothes and homewares can all be purchased in the many small shops interspersed with the bars, hair salons, wrought-iron workshops and religious buildings lining the roads and paths that wind through the suburbs.

As these observations suggest, in the course of the broader project that this piece comes from I have been thinking about how suburban landscapes get made in post-colonial contexts, and, in particular, the role of the middle classes in making these landscapes. I am particularly interested in the middle class “boundary work” that distinguishes interests, lifestyles, values, aesthetics and socio-economic position. Here I draw attention to the specifically spatial forms of boundary work that take place in the suburbs. Starting from the assumption that the social and the spatial make each other, I argue that we should pay attention to the ways in which the spaces invoked in discussions of boundary work, social hierarchies and inequalities are material as much as they are social—and that they do, in fact, matter.

This has led me to think about the suburb as a spatial, built form as much as it is a particular social space in which class difference is reproduced socially and culturally. Class difference is made and reproduced through the practices of acquiring land, building a house and living a suburban lifestyle. Such practices involve local and global circulations: among other things, of people, cash, documents, building materials, cars, design ideas and soft furnishings. But they also involve accretion—of assets such as houses and cars, of ways of doing things such as planning and building, and of the built environment, such as landscapes. Suburban landscapes are the outcome of decades of overlapping colonial and post-colonial laws, planning procedures and attempts at urban development; ad hoc donor and private sector interventions; and the accretion of thousands of individual building projects. In the rest of this piece I want to briefly show how suburban landscapes, suburban housing and suburban futures provide windows on to the circulations and accretions that enable middle class accumulation in contemporary Dar es Salaam.

Although these suburban landscapes are relatively new they have been in the making since at least the 1960s. Today they are socially mixed places, dominated by individual walled plots and punctuated by collections of more haphazard dwellings built in the suburban interstices—in valleys and disused quarries, near swamps and open ground for infrastructure like gas pipelines and electricity pylons. This social mix reflects the different ways that people have accessed land in the area over the last half-century, including erstwhile farmers who farmed here in the 1960s and 70s as part of state-led initiatives to increase agricultural output, but who have now turned their farmland into homesteads.

More recent arrivals include inner-city residents looking for affordable land on which to build a house and a minority who have bought planned plots in newly laid out residential areas. The state has provided some formal planned land for housing, such as the 20,000 Plots scheme launched in 2002 that allocated surveyed land for self-builders in suburban and peri-urban areas. By 2006 some 30,000 plots had been made available citywide. The majority of suburban residents, however, have acquired and developed their land informally over time.

Beginning in the late 1980s, the former peri-urban fringes of the city were transformed into suburbs. As people started to build houses, the peri-urban areas transformed from what John Briggs and Davis Mwamfupe in 2000 described as “a zone of survival” into “a zone of investment”. By 1997, they estimate that two-thirds of the houses under construction in the new suburbs were being built by middle-class state employees who were entitled to a Tsh100,000 (roughly $160) monthly housing allowance, while others built with “windfall cash” associated with the new opportunities that presented themselves with economic liberalization.

The rush to acquire suburban land was also fuelled by land law reform (in particular the Land Act 1999 and the Village Land Act 1999), which effectively commodified land and stimulated a land market in Tanzania. Speculation increased dramatically as land acquisition and house-building became significant investment strategies for the middle classes in the absence of mortgage financing. Only a minority of urban dwellers, however, hold legal title to their land, despite attempts at formalisation through the Property and Business Formalization Programme, or Mpango wa Kurasimisha Rasilimali na Biashara za Wanyonge (MKURABITA), which issues residential licenses to people with informal rights in unplanned areas. Efforts to issue titles have fallen way behind applications. In unplanned suburbs residents are still most likely to hold customary or informal rights to land sanctioned by neighbours and the street government, the lowest level of urban local government.

These changes have meant that places that used to be regarded as the city’s peri-urban fringes have become popular residential neighbourhoods as more people seek relatively affordable land close to the city on which to build a house. In the past plots located 20km and beyond from the city centre would not have been desirable. But city dwellers have been increasingly drawn to the suburbs as residents have brought infrastructure; private car ownership has increased and new private buses now serve the city’s many residential neighbourhoods.

Houses offer perhaps the most revealing window on to contemporary class practices, marrying the circulation of money, things and taste with the slow accretion of concrete walls, window frames and roofing sheets. The suburban villa or bungalow has increasingly become a site of distinction since political and economic liberalization in the mid-1980s. Because each house is an individual building project, they are the clearest statement an individual can make about their status and their taste.

Builders can now tap into a globalised market of architectural features, roof shape, paint colour, materials and level of finishing to distinguish their homes from both poor and middle-class neighbours.

The state has provided some formal planned land for housing, such as the 20,000 Plots scheme launched in 2002 that allocated surveyed land for self-builders in suburban and peri-urban areas

Additional considerations that reflect class position include the physical location of a plot (such as near tarmacked roads and high up on hillsides to capture the breeze), the size of the house and the quality of the garden enclosed within the plot walls. No two houses are the same, but contemporary houses do look very similar to each other. This is partly because of the influence of contemporary fashions and available materials, but it is also an outcome of the fact that, while houses reflect the vision of the individual resident, they are nevertheless built by local builders and craftsmen who share a particular repertoire of building techniques.

Houses are sites of accretion as well as of circulation. In a very physical sense, houses are assembled slowly and almost entirely in the absence of housing finance. Anyone who can complete a house in a short space of time is immediately viewed with suspicion (“Where did they get that much cash from?”). The house, and the land on which it is built, is often an individual’s most significant asset.

Dar es Salaam’s suburban neighbourhoods are the accretions of thousands of individual building projects. The process is almost entirely informal, cash-based and highly precarious. There is no finance capital here, though there may be private debt as a result of market or private loans. There is some state, donor and private sector activity in service provision. Those residents who can afford to, connect to patchy electricity services provided by the state-owned energy utility and some connect to the water services provided by the water parastatal, although many suburban residents prefer to rely on their own boreholes or private delivery service. Some roads have been tarmacked as part of World Bank or state projects, but the majority are dirt tracks that disintegrate in the rains.

Neighbours use social media to raise money for improvements to their local infrastructure. Private primary and secondary schools are relatively plentiful, while poorer residents bear the brunt of the state’s failure to keep up with these burgeoning neighbourhoods. Local government offices exist, but are inadequately resourced and describe their own role as “conflict resolution, keeping the peace and security”. The latter, security, is in some instances organised and provided by residents themselves. Procedures around urban planning, surveying and titling are unpredictable but always expensive. Maps delimiting the planned use of space are not in circulation, so that neighbourhoods develop according to their own logics and politics. In any case, maps can always be re-drawn for a fee.

It is therefore no surprise to learn that a major element of middle-class boundary work involves various struggles over land: border disputes (between neighbours or family members), struggles over official tenure (against different levels of the state), state demolition (of structures too close to bits of infrastructure) and the very ownership and use of land (between poor and middle-class residents).

In this context the suburb emerges not just as a place of accretion for middle-class assets, but also as a site through which the middle classes circulate as they accumulate. The middle classes, who partly rely on the distinctiveness of the suburban landscape to shore up their status claims, are nevertheless already making plans to move on. As the unplanned and informal practices that dominate suburban land use lead increasingly to unregulated sub-division and building, so are the middle classes looking to their next building project in Dar es Salaam’s neighbouring regions. Many have already acquired land in these districts, which they currently farm. In ten years time they will move to new houses – possibly by then located in the new suburbs of Dar es Salaam, leaving their current homes as rental projects. Circulating and accreting land and houses in Dar es Salaam is a spatial and temporal middle-class strategy of accumulation.