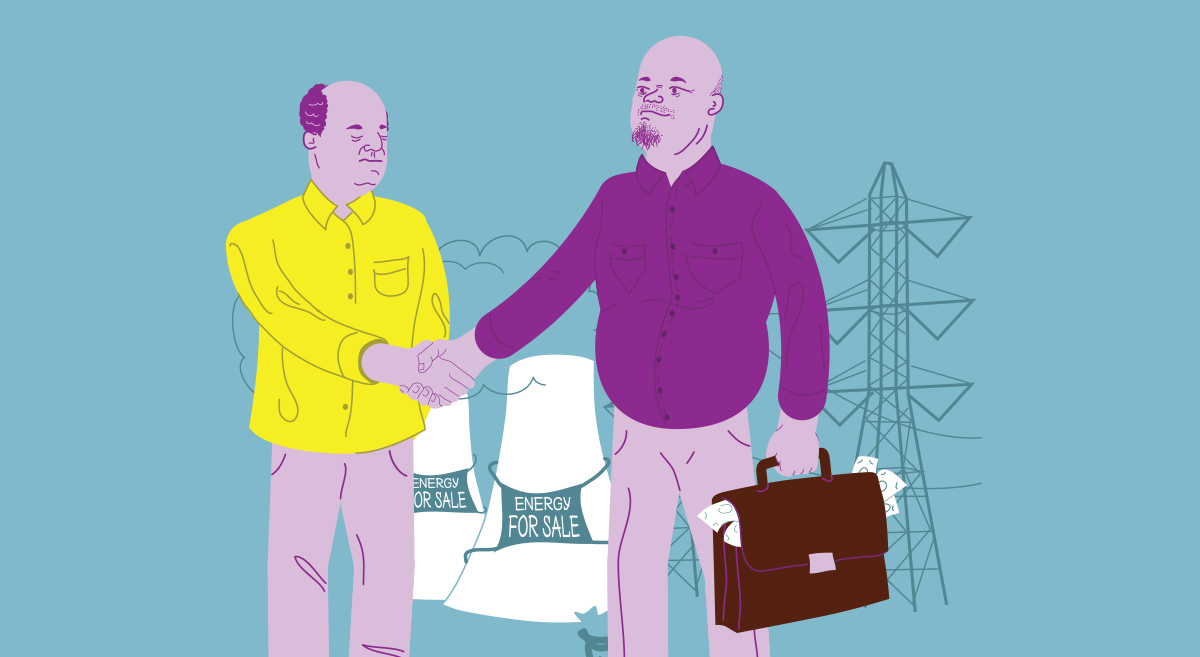 One of the most interesting aspects of recent Tanzanian history is the way foreign investment has helped to reconfigure an unusually centralized single-party state. In the 1990s, liberalization offered many opportunities for private self-enrichment previously denied to politicians under first president Julius Nyerere’s strict socialist Leadership Code. By the mid 2000s, however, it was also evident that self-enrichment was necessary for political survival. Under the centrifugal pressure of multi-party democracy, a form of competitive rent-seeking emerged whereby elite politicians sought to skim flows of foreign aid and investment through factionalized networks while maintaining a façade of democratic accountability.

Race has played a complex role in this calculus, particularly around Tanzania’s energy sector. Despite an officially race-blind egalitarianism, the dominant Party of the Revolution (CCM) tacitly persecuted Asian nationals in the 1970s and 80s. A series of scandals in the 2000s stoked the popular sense that CCM was, ironically, now colluding with wealthy Asian businessmen in exchange for financial support. In response, CCM politicians often tried to displace this racialised frustration with corruption onto an anti-western critique of “foreigners” and of western-style reform in general. For their part, western companies and their development partners, who are struggling to retain their influence, are in many respects no less exploitative, but often displace this uncomfortable fact by leaning on the language of good governance, a language that ironically harkens back to the political vocabulary of socialist rectitude.

In what follows I sketch these ironies as they have played out in Tanzania’s partially privatized energy sector. Tanzania has enjoyed over a decade of high GDP growth, but as many critics have observed this has not translated into to a golden age of “Africa rising” or witnessed a substantial growth in the middle class. A poignant symbol of this disconnect is Tanzania’s electricity supply, which has become less reliable and more expensive as the country’s economic and cultural importance has expanded. The roots of this impasse lie in 20 years of state capture of energy reform. Lucrative contracts with private power plants, often burning expensive diesel or heavy fuel oil, have crippled the fiscal solvency of the national power company, Tanesco, and prevented reinvestment in its physical and institutional structures.

Here I focus one aspect of this history: a 20-year deal with Independent Power Tanzania Limited (IPTL) and Pan African Power Solutions Tanzania Limited (PAP) for 100MW of diesel-generated electricity. Hailed by some as an instance of south-south collaboration, denounced by other as unpatriotic corruption, the project has been embraced as pragmatic development and resisted as neo-colonial exploitation. Whatever the precise truth, IPTL’s and PAP’s byzantine trajectories reveal the way that for over a century Tanzanian governance has remained a series of competitions and collaborations between Africans, Asians and Euro-Americans, all jockeying for position along the Swahili coast.

By the late 1990s, decades of mismanagement and under-provisioning had left Tanzania’s hydroelectric power sector in disrepair. Amidst prolonged cycles of drought and broader plans for privatization, the Ministry of Energy and Minerals (MEM) signed a short-term contract for emergency, diesel-fueled power with the relatively unknown company IPTL. This curiously morphed into a 20-year Private Production Agreement (PPA) for 100MW of diesel-generated electricity, thereby sidelining an on-going World Bank-sponsored project. Worryingly, the price at which IPTL would sell power to Tanesco was to be calculated after a determination of the plant’s capital costs. The World Bank suspended the Songas contract in protest. Independent and opposition presses published a good deal of criticism on the expensive and redundant project.

The IPTL deal exemplified the ethno-racial dimensions of liberalization. By the late 1980s, donor pressure and a prolonged economic crisis moved the state to accept a host of structural adjustment reforms. Under Nyerere’s successor, President Ali Hassan Mwinyi (1986-95), the state deregulated its currency and liberalized imports. This shifted the incentive structure for national elites. Instead of relying on access to the resources and prestige of government positions, aggressive vigogo (tree trunks) accrued rents on import-export trade, real estate and divestiture of parastatals. Well-developed trade networks meant that many otherwise marginalized Tanzanian-Asian businessmen were suddenly well positioned to join these oligarchic alliances.

Fitting this profile, IPTL was a joint venture between Mechmar Corporation of Malaysia and minority Tanzanian shareholder VIP Engineering. VIP was composed of a group of Tanzanian-Asian businessmen represented by James Rugemalira, a former Bank of Tanzania employee and private sector representative of an “indigenous” (wazawa) entrepreneur association. Many ministerial elites supported the deal, including future president Jakaya Kikwete. This pro-IPTL crowd dismissed criticism as opposition to south-south cooperation and a conspiracy on the part of “foreign agents” (reads: World Bank).

One of IPTL’s most vocal critics has been Brian Cooksey, a sociologist, consultant and occasional investigative journalist. In 1998 letter to the African, Cooksey was dubbed a racist with a “pathological hatred of south-south cooperation,” and further described as possessing “derogatory tendencies towards African governments, leaders and its people”. Writing in 2002, Cooksey described how he had variously been referred to as a “dangerous underground advisor,” “self- appointed energy expert,” “tax-evader,” “unlicensed gemstone dealer,” and “a frequenter of a disreputable Dar es Salaam dance hall”.

In some respects, Cooksey’s whiteness served as rhetorical displacement of anti-Asian discourse that had put CCM on the back foot ideologically. It aligns indigenous businessmen—both Asian- and African-Tanzanian nationals—within a broader south-south ecumene by triangulating them against neo-colonial interference of the World Bank and its supposed lackeys, embodied here in the figure of the louche expat. Hence on one hand it ties together familiar socialist themes of strategic friendship, racial egalitarianism and anti-western self-reliance. But instead of invoking these deals in the name of the wananchi (citizens), the new victims in this rhetoric are Asian/African businessmen and “leaders.” Western actors such as the World Bank, foreign press and donors responded by criticising IPTL in moralizing language that recalled Nyerere’s righteousness.

If nothing else, these ironic inversions and transpositions invite us to rethink the way history is experienced along the East African coast. Instead of stark breaks separating moral socialism from amoral neoliberalism, or from western aid to eastern trade, regional history in what came to be Tanzania might be better seen as shifting configurations of three, enduring socio-political orientations. Because of its racial segregation, Dar es Salaam is sometimes called mji wa rangi tatu (“a city of three colours”), and we might extend this trichotomy to national politics at large.

Firstly, there is the force and allure of western-style technocratic development, originally exemplified in white colonists. Secondly, there is entrepreneurial liberty and accumulative possibility exemplified in “coastal” merchants. Thirdly, there is the moral legitimacy of African indigeneity, exemplified in neo-customary, gerontocratic chiefs. In the independence period, the new Tanzanian state inherited the colonial strategy of merging the first and third, while suppressing the second. That is, it combined moral authority (previously reserved for colonially-employed chiefs) with bureaucratic power (previously monopolized by white missionary schools and African clerks), and continued to circumscribe the power of coastal traders begun under colonialism. These categories soon hardened into the tacitly racialised logic of national citizenship, in which Asian and Arab traders became circum-Indian Ocean others who were not fully part of the polity.

In some sense the historical energy of the post-socialist era revolves around the way African legitimacy, western development and Asian entrepreneurial liberty all became kaleidoscopically reconfigured. The emboldened vigogo elite pursued their accumulative schemes under the rhetorical banner of a south-south developmentalism that, they claimed, could rival the west. Western donors, whose words carried far less weight in the face of alternative sources of funding and patronage, leaned on the language “good governance” as a kind of proxy moral legitimacy.

Indigenous African businessmen played both sides. Some, like James Rugemalira, railed against the patronizing managerialism of western donors, claiming the right of personal enrichment and posing as suppressed captains of industry in the making. Others in the opposition decried CCM, pointing to the dubious influence of Asian capital, and against it claimed the political legitimacy of privileging African nationals in business. These new combinations interacted with old associations to create shifting alliances.

IPTL entered into a near decade-long series of legal battles with Tanesco, beginning with the allegation that IPTL had inflated tenders and bribed ministers to push its contract through. Nevertheless, by 2005, it had come online and represented a significant transformation of the national grid. Thermal sources (natural gas and diesel) came to out-supply hydropower, comprising over 50% of all power produced. Financially, Tanesco continued to operate at a loss, sometimes paying well over half its revenue for plant fuel and capacity charges.

In 2005 Standard Chartered Bank Hong Kong (SCB-HK) purchased IPTL’s distressed $120- million debt. The same year, Tanesco opened up a second case against IPTL, accusing it of miscalculating capacity charges. Tanesco’s recurring payments to IPTL were put in a deed or escrow account until a judgment could be reached by the International Centre for Settlement of Investment Disputes. As of 2013, the escrow had ballooned to over $122-million. In 2014, Rugemalira illegally transferred IPTL’s shares to an unknown company called Pan African Power (PAP), over SCB-HK’s objections. Then, with the apparent collusion of members of the cabinet, parliament and Tanesco, the disputed escrow monies were transferred to PAP as well. It was later alleged in a parliamentary report that Rugelamira had donated much of that money to various CCM ministers and elites.

PAP is owned by Harbinder Singh Sethi. Born in 1958 in Iringa, a town in the southern highlands of Tanzania, Sethi moved to Kenya in 1980s during Tanzania’s socialist anti-Asian posturing. There he flourished as a financier connected to the politically powerful Moi family. His subsequent return to Tanzania was marked by two decades of gradual reincorporation of transnational Indian Ocean financial networks into the political apparatus. Moreover, as with the first round of controversy nearly 20 years ago, the Asian dynamics of the scandal were an uncomfortable and palpable subtext.

The Sikh temple in Dar es Salaam defended Singh in the press during PAP’s court battles.

For his part, Singh and IPTL promptly donated to various churches, police stations, schools and other charitable causes to signal nationalist bona fides. In another parallel, Rugemalira and IPTL (now IPTL-PAP) redirected anti-Asian sentiment to anti-foreigner sentiment. IPTL-PAP issued a statement accusing the call for investigations into the escrow issue as a ploy to help a “foreign bank” collect a fraudulent debt at the expense of a heroic Tanzanian investor.

As of June of 2017, Singh and Rugemalira have been arrested and charged with “economic sabotage,” a socialist-style prosecution that bore the imprint of the 2015 presidential election. John Magufuli’s administration quickly adopted a nationalist posture and a series of bullish anti-corruption campaigns. These might be understood as symbolic reactions to the transnational rent-seeking of the Kikwete administration and the unpopularity it caused CCM. But whether Sing and Rugemalira will be convicted, and whether IPTL-PAP contract will be cancelled, remains to be seen.

In some ways the partial realignment of an East African government away from the west towards circum-Indian Ocean networks of economic power harkens back to the late nineteenth century, the last major historical era of a liberalized economy. During that period, Indian Ocean merchants, white colonizers, and autochthonous leaders all formed fluid alliances as they jockeyed for position within an unstable regional hegemony. Today, just as the partial privatization of Tanzania’s grid speaks to polycentric arrangements of capital and technology that transcend the consolidation of the nation-state, the oligarchies that profit from such arrangements echo earlier political formations. What perhaps has changed is the power of racialised discourses to fix, frame, and justify the winners and losers in this dispensation. Ultimately, though, the troubled state of Tanzania’s power grid can be painted in no single colour.

Michael Degani is an assistant professor in the Department of Anthropology and member of the Center for Africana Studies, Johns Hopkins University, Baltimore