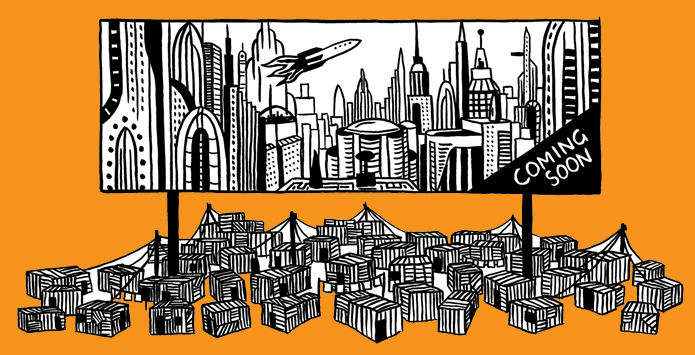 Urban design and architecturally-inspired visions of fantastical new cities of the future seem to be in fashion again. Not since the days of French architect Le Corbusier back in the 1930s, have built environment professionals found their work attracting such public interest. And, significantly, there are many elements in common between the grandiose, modernistic and technocratic urban solutions of Le Corbusier’s day and the Dubai look-alike visions posted on property developer websites for the rapidly growing cities of Africa and Asia. Glass-box skyscrapers separated by swathes of green and rapid transit routes have seemingly not lost their allure in the urban design world, while the “real” world of informal shack dwellers and street traders is erased both from the map and the consciousness of politicians and urban elite.

In an article published in 2010, Michele Acuto, using Dubai as a case study, describes these promotional plans as exercises in the use of “symbolic power”, as cities try to establish themselves as “world class” and as attractive places for the elite and investors. Acuto, a senior lecturer in the Department of Science, Technology, Engineering and Public Policy at University College London, argues that the built environment has become an important vehicle for these promotional narratives with buildings needing to take on iconic identity: skyscraper towers are commonly used but so are ultra-modern and distinctive airports, trade centres, office blocks and retail centres.

Indian cities have been subject to this Dubai-ification for a good decade or so, as Gautam Bhan has identified in his writings, but African cities are more recent targets. In the post-2008 economic climate, African cities have been labelled as the world’s “last property development frontier” and international architects and developers have scrambled to sell fantastical graphic visions of new satellite cities—or in some cases entire city makeovers—to gullible politicians. Visions such as the one for Kigale, Rwanda, assume that the largely informal urban population will be wished away (a process that is actually underway in this city). The new satellites such as those for Nairobi and Hope City in Ghana promise a modernised and sanitised living environment for the middle classes, far removed from the squalor and congestion of existing cities. Hope City, designed by an Italian architect who was evidently inspired by African beehives, is a particularly futuristic conception of buildings that contain all facilities needed for their resident and working populations, and seemingly remove the need to go outside at all.

Other cities are creating large land areas through infill to create new urban extensions. Kinshasa in the Democratic Republic of Congo is one of Africa’s largest and poorest cities, yet a major land infill of the Congo River will support upmarket retail and residential developments, and in the process many small farmers along the banks of the river have had their livelihoods destroyed. In Nigeria, Eko-Atlantic is being created on an artificial island off the coast of Lagos: the island stretches for over 10 km allowing some 250 000 people to disengage themselves from the congestion and pollution of existing Lagos. At the same time, poor occupants of Lagos’ waterfront—the floating shack-dwellers of Makoko—have had their houses proclaimed illegal and destroyed by the government.

Adding to the selling power of the glitzy graphics, many of these plans also claim to be “smart”, “eco” and sustainable cities, thus drawing on fashionable rhetoric to justify designs that are very far from these concepts. Smart cities require a great deal more than broadband and other computer-controlled infrastructure: they are also highly dependent on the associated human resources and expertise to develop and maintain “smartness” and these are not necessarily available in the target cities. The plans are also difficult to reconcile with environmental sustainability. Skyscraper glass-box buildings are huge consumers of energy for air-conditioning and lifts; large public green spaces have to be maintained and watered; satellite cities usually generate considerable traffic flows back to the main city; and most of the graphics show car-based movement systems rather than public transport, walkable streets and mixed use.

Using these terms can be described as a form of boosterism to help sell a property development, but they do no more than pay lip service to the deeper meaning of the concepts. Design has become a superficial exercise of cut-and-paste graphics along with copied text to give the impression there is a concern with more than just profit. But the real impacts will be felt in increasingly unequal cities in which the poor are consistently marginalised in both a spatial and functional sense as they are pushed further and further towards the urban peripheries, and as public infrastructural and facility resources are redirected away from meeting basic needs towards supporting the demands of the new enclaves of the elite.

City design does not have to be like this of course. Architectural and planning history recounts a number of individuals (such as Jane Jacobs, John Turner, Nabeel Hamdi and more) who have viewed design as potentially developmental and empowering for the urban poor, and also as a skill that can lie in the hands of ordinary citizens, and not just those of the highly skilled professional designer. Intelligent practice, writes Nabeel Hamdi in his 2004 book, Small Change, “builds on the collective wisdom of people and organizations on the ground—those who think locally and act locally—which is then rationalised in ways that make a difference globally”. A good African example of this is the Muungano Kabimoto project in Nairobi, where a community started a saving scheme and, with the help of the local Slum Dwellers Association affiliate NGO, constructed four-storey homes on a 16 m2 plot. These homes were affordable and directly tailored to the needs of the occupants.

During its tenure as the first global south city to receive the World Design Capital (WDC) award, what philosophy of design will the city promote? Will it be tempted to use the title to indulge in “world class” boosterism of the city, with questionable arguments that more tourists and foreign investors will somehow benefit everyone in Cape Town? The year of WDC is a major opportunity for Cape Town to take a different tack and to recognise the many everyday design initiatives scattered across the metropolis—innovative ideas that create livelihoods, improve shelter and services, and directly challenge the grandiose approaches to urban development that now seem to be gaining support across the continent.

Vanessa Watson is Professor of City Planning in the School of Architecture, Planning and Geomatics at the University of Cape Town