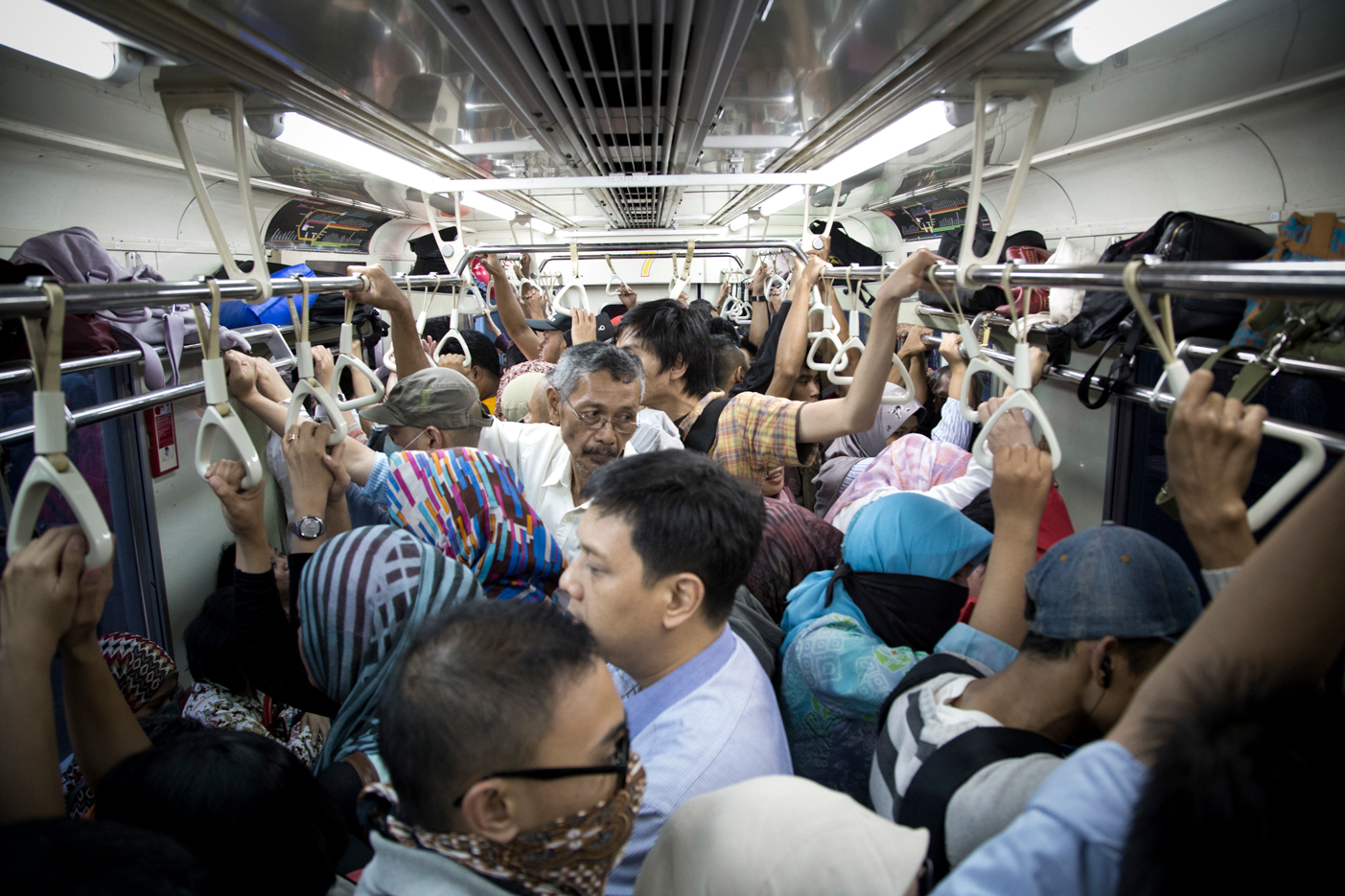 He is late again. All he can do is wait on the station platform for the next train. It’s scheduled in another 25 minutes. This will be the third time 28-year-old Arman Budianto shows up late at the office this month.

Since an electronic attendance system was put in place at his office two months ago, Budianto has struggled to adhere to the rigid office hours. The excellent relationship he enjoyed with colleagues from the human resources department of the multinational insurance company he works for no longer has any bearing on his attendance record. Like this morning, his punctuality is sometimes jeopardised by the public transport system that he relies on to travel daily from Serpong, a suburb located about 30 kilometres south-west of Jakarta’s central business district. It’s a daily grind.

Jakarta Metropolitan, a city of about 30 million people, has become infamous for its traffic congestion. According to the megacity’s transport agency, nearly 2 million commuters travel into the city daily. Some 25.3% of these commutes take place on the city’s public transport system, while 50.8% are by the ubiquitous motorcycle taxi. The remaining 23.9% are by private car. Budianto is a regular user of the KRL Commuterline service that connects the CBD to the edge of the city where, driven from the centre by the high cost of living, many Jakartans live. While the city has been abuzz about the recently introduced $1.1 billion metro rail system, the first 16 kilometre phase that was launched in March 2019 does not reach areas like Serpong, where most of the city’s working population live.

As he waits, Budianto contemplates the cost of being late again. The new attendance system requires a mandatory log-in by 8.30am for each employee. An electronic fingerprinting machine verifies each person’s credentials and logs their time of arrival and departure. Arrive late, and an automatic red flag is registered against you, appearing on the employee attendance record. Cumulatively, it affects the monthly salary each employee receives. Budianto’s employer introduced this new monitoring system with the caveat that it would only apply to mid- and low-level employees.

This is Budianto’s third job since graduating from college some years ago with a diploma in economics. First was a two-month stint working at a construction company owned by his uncle; then came a six-month long gig as a debt collector for Bank Perkreditan Rakyat, a savings and loan business unit popular among small and medium-sized businesses in suburban areas. His uncle paid him too little. At the bank, the intense pressure that came from his supervisor on the one hand, and debtors on the other, became too much to bear. He quit. He finally managed to secure a job as a claims and policy processing clerk at a multinational insurance company after being unemployed for four months. Third time’s been the charm. Budianto’s current salary of 4m Indonesian rupiah (about $255) is still pretty good. It’s slightly higher than the regional standard for a minimum income. However, living 30 kilometres from his place of work and the penalty imposed on him for being late are sources of a constant worry.

For the moment, his choices are limited. Renting a boarding room near his place of work would save on transportation costs, reduce the time he spends commuting, and ultimately result in more certainty as to what his salary slip says at the end of each month.

The problem lies in the rental costs. The most affordable rooms within a two-kilometre radius of the bank are single bedroom units with a shared bathroom, no air conditioning and a small window into a communal hallway with no natural light.

This would cost him about 38% of his monthly income and wouldn’t leave him with enough for other expenses – including taking care of his recently widowed mother. His only viable choice for the moment is to continue living with his mother in Serpong. The daily commute costs him 50,000 Indonesian rupiah ($3.20).

A typical day for Budianto begins at 5am. He has a well-worn routine – shower, morning prayers, and a quick goodbye to his mother as he grabs the breakfast and lunch that she prepares for him daily. Then to the sometimes Herculean hour-an- a-half journey to get into the office by 8.30am. It begins with a hop on his old motorcycle to the train station where he jumps on the packed train into the city. Today, the bike broke down halfway to the station, turning his regular routine into an awful mess.

The train pulls into the station, and after pushing and jostling his way past other commuters, Budianto manages to get inside, uncomfortably squeezed between a few other passengers, each desperately trying to avoid eye contact. Next to him is a middle-aged man in a grey suit. His eyes are closed. Sitting opposite is a young woman in neat work clothes, earphones on, eyes focused on a Korean drama on her mobile phone screen. On one of the priority seats, a little boy looks out of the window, narrating everything he sees to his mother, who sits quietly, still looking sleepy. Except for the little boy, everyone else looks weary, preparing themselves for the long day ahead. It will end as it has begun – on the same train, only traveling the opposite direction.

The train finally pulls into Sudirman Station. Budianto braces himself for the rush that leads him onto the busy city street. Stepping outside, he stands still for a short while, and other thoughts flood his mind. On his way home, he has to collect his motorcycle from the garage he left it at this morning after the breakdown – an unexpected cost. Dewi, his long-term girlfriend, is expecting him to propose soon – she texted him while he was on the train to say hello. He will need to call her. Now, he is already late for work.

Budianto collects himself and gets lost in the crowds. The fingerprint scanner awaits, and it remembers

Andesh Tomo is an activist and architect based in Jakarta