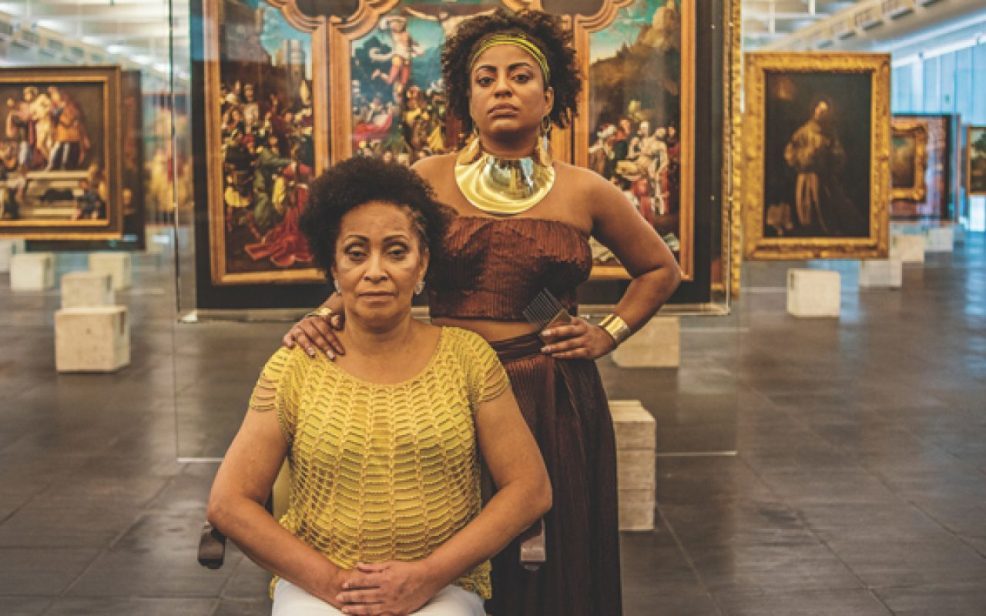 A Year of Struggle

Carmen Silva, founder of Sao Paulo's Movimento Sem Teto do Centro (MSTC) has spent the last year in a battle to stay out of prison on trumped up charges

Preta Ferreira’s release after four months in jail on 11 October 2019, and her subsequent reunion with her mother, the urban activist Carmen Silva in downtown São Paulo, was filmed and posted on the Facebook page of the progressive news collective, Jornalistas Livres. It is raw and emotive footage. It begins after dark with a journalist’s running narration about where they are (across the street from the mainstream Brazilian daily newspaper, the Folha de São Paulo), and abruptly cuts to the street. There, Ferreira, who was granted habeas corpus late that afternoon, appears amid shouts of encouragement from her friends, family and supporters. Ferreira can be seen climbing the stairs of an older building typical of old-school downtown São Paulo. She is warmly and enthusiastically embraced by the narrator: “Mana, mana” (“Sista, sista”) can be heard amid a raucous reception from other friends and supporters of the Movimento Sem Teto do Centro or Downtown Roofless Workers Movement (MSTC), an activist organisation that rehouses the city’s homeless in previously abandoned buildings. Ferreira displays a small, red MSTC flag, held upside down in the emotion of the moment before she is overtaken by enthusiastic embraces and led into another room to be reunited with her mother.

Preta (“Black” in Portuguese) is a nickname. Ferreira is 35, the oldest of Carmen Silva’s eight children, a college graduate with a degree in advertising, as well as an actress, singer and MSTC activist. Silva left Preta and her siblings in the city of Salvador in the north-eastern state of Bahia when she fled an abusive husband in search of a better life in São Paulo in the 1990s. She slept on the street and in shelters in the city before becoming part of the Roofless Workers Movement.

Silva has been in hiding, out of reach of the police and journalists. I was able to speak to her on the telephone just as this piece was going to press. The over 100 days in which two of her children—Preta and Sidney—were in jail while she was in hiding, were terrible, she confirmed. “I lost my identity,” she said over the phone.

This is quite a thing to lose when you are the Roofless Workers Movement’s most charismatic leader.

Silva became one of MSTC’s founders in 2000. As Silva tells the story, she was distraught when she attended her first meeting of homeless activists. She had been invited to the gathering by a friend at the shelter she lived in during the 1990s. São Paulo was not what she had expected it to be. Jobs, education, medical care and housing were tough to come by. It wasn’t dissimilar to Salvador, the city she had fled in the expectation of better conditions. Silva went to the meeting “out of politeness—to please my friend—and then all this happened,” she says, laughing over the phone. “All of this” is the MSTC, which has managed the occupation of dozens of buildings in the city. It also refers to the 3,000 people who have a roof over their heads thanks to the movement.

In July 2019, mother and daughter, together with Sidney, Silva’s son, and several others, were accused of extortion and sentenced to “preventive” prison

In 1997, Silva had moved to an abandoned municipal building downtown on 9 de Julho Avenue, where Preta was later brought up. The year 1997 marked the first of several attempts to occupy the building. Both mother and daughter figure prominently in a movie released in 2016 about the MSTC occupation of another abandoned building in São Paulo, titled Era o Hotel Cambridge (The Cambridge Squatter), directed by Eliane Caffé. Silva led the occupation of this site, the former Cambridge Hotel. She plays herself in the film, which was made on-site with a mixture of actors and real-life participants, including Preta. Within the MSTC, both Silva and Preta are leaders. Silva is a living legend.

In July 2019, mother and daughter, together with Sidney, Silva’s son, and several others, were accused of extortion and sentenced to “preventive” prison. Silva avoided imprisonment until her lawyers were able to obtain habeas corpus for her, keeping her out of detention.

To almost anyone who cares, the extortion charges against Silva and Preta and Sidney are regarded as outrageous. The significant pro-bono support they received from some of the most prestigious legal firms and professionals in the country was not just luck. More than 500 Brazilian artists, including Chico Buarque and Caetano Veloso, signed a petition demanding their freedom.

Silva’s reputation is enormous and impeccable. She is considered one of the most important and effective brokers at work in São Paulo’s myriad social movements. She has led several occupations of abandoned buildings across the city with a mixture of natural charisma, collective and democratic principles, and an ability to enforce rules and standards. She navigates smoothly between the different worlds inhabited by the homeless and government authorities and has secured funding and status for the MSTC occupations. When she speaks, Silva sounds like an urbanist. She expertly cites statutes and laws and lists the incentives instituted by São Paulo’s city authorities, matching each item to its political sponsors and mayors over the last 25 years.

Matthew Shirts is a journalist based in Sao Paulo