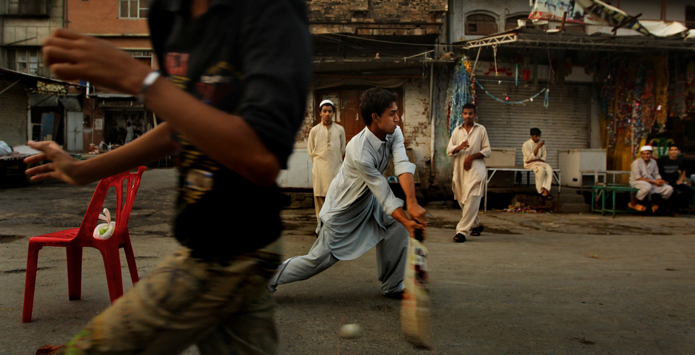 Shaped by history, the activities that occur in Karachi’s empty lots while they await development have defined the city

It’s big and empty, what else do you need?” Zohaib says, shielding his eyes from the sun as he waits for his turn to bat. Known as one of the best bowlers in his neighbourhood, Zohaib was first brought to the weekly Sunday matches on this makeshift cricket ground by a neighbour a year ago, and he has been a regular since. “As long as we can use this ground, we will,” he says.

The piece of land that Zohaib and his friends use for their regular game of cricket is not actually an empty plot. Instead, it’s a large cleared piece of land, set to be turned into an upper-class housing development called Defence Housing Authority Phase 8. It is one of many in Karachi, Pakistan’s largest city and financial capital, where land is often considered to be in short supply. Before India gained independence from the British and Pakistan was partitioned from India in 1947, Karachi was a port city of about 500,000 people. Since then, the population has grown to around 25 million, due in large part to the flow of migrants and refugees from other parts of Pakistan and across south Asia.

In this enormous coastal city large swathes of land, sometimes in heavily trafficked areas, sit undeveloped and unoccupied. The piece of land on which I met Zohaib is bound to be developed relatively quickly in comparison to some that have remained empty for decades. Many of those are also used as makeshift cricket grounds.

Nadeem, a middle-aged shopkeeper, reminisces about his childhood when there were plenty of “nice” public maidans (open spaces) on which he and other kids across Karachi could play hard ball cricket. It’s a fast-paced, bruising game where batters require leg guards and helmets for protection. “Those grounds are gone now,” Nadeem says. Before Pakistan’s cricket boom in the late 1970s, the game had been the domain of the wealthy in elite schools and universities. Increased television access and successes by the Pakistani national team at around the same time meant the sport reached the masses. With that came the invention of “tape-ball cricket”, where electrical tape is wrapped around a tennis ball so that it can be thrown faster and behaves more like a hard ball. Tape-ball, unlike hard ball, was inexpensive and could be played without equipment on open plots and streets.

At the same time, Karachi was rapidly expanding, as it had been since the creation of Pakistan in 1947. As Pakistan’s first capital after partition, it instantly became the site of a mass migration of refugees from India and other areas. The government failed to handle the challenges presented by this rapid influx and the city quickly developed its reputation for violence and unrest. Protests rocked the young capital throughout the 1950s. In 1953, student-led demonstrations spread across the country.

After Field Marshal Ayub Khan staged Pakistan’s first military coup and became president in 1958, he shifted the capital to the new city of Islamabad—close to the army’s headquarters and far away from Karachi’s riotous population. The new regime moved Karachi University with its sizeable, restive student body outside city limits, where it still stands today. The enormous numbers of refugees, most living and working informally near City Centre, were meant to be moved into two large housing schemes, Korangi and North Karachi, both far away. Ultimately the new areas were meant to include industrial areas, schools, mosques, and other necessary institutions as a way of ensuring that these undesirable populations would not need to come back into the central city. However, these didn’t materialise. By the time industrial areas developed, it was too late. Many Korangi and North Karachi residents were commuting into the centre where there was economic opportunity. Some slept in their stores. The government had expected these first residents to pay instalments to fund further housing development, but many refused and resisted eviction attempts. Their reasons were clear: because they had been forcefully shifted away from their livelihoods, they claimed they had actually been made more destitute.

Multiple housing schemes were attempted; many fell short of expectations for various reasons. Schemes for middle-class populations on the edge of the city had no amenities like water, street lighting, or security. In other places, the bureaucracy was so slow and loans so predatory that allottees could not start building houses on the plots they’d been awarded within the given timeframes.

Eventually the Karachi Development Authority announced that it would begin auctioning off plots of land for both commercial activity and low-income housing to the highest bidder. Such bidders, of course, tended to be middle- and upper-class. Some held on to their newly acquired land, waiting for a more opportune moment to build or sell. At the same time, the government poured money into plans meant to solve the affordable housing problem. It soon became apparent that these policies better served the interests of middle- and upper-class populations at the expense of low-income groups. Today’s Karachi is the result.

In a 2011 report, Karachi-based architect Arif Hasan writes that “62% of Karachi’s population lives on the 8.1% informally developed land”. Density in informal settlements is also increasing. According to Hasan, houses in some informal settlements that were built as two- or three-storey structures now have expanded upwards, reaching five, six, even seven storeys high.

In this push and pull of informality and formality, empty plots occupy a space in the middle. Their owners are mostly upper- or middle-class Karachiites with homes or businesses elsewhere. In many cases, they are holding these plots for speculation. Some have owned these plots for decades, patiently waiting for a time to build or resell for the highest profit. The estimated 300,000 empty plots across the city have come to represent a complete stagnation. The government has extremely low “non-utilisation” fees, which makes long-term inaction possible. That too is no accident. Beginning in the late 1980s, the governing board of the Karachi Development Authority tried to force the hand of plot owners by raising non-utilisation fees. Protests by business and other owners saw the board disbanded by the government. This is also why 68,000 apartments across the city are currently vacant, despite affordable housing shortages and a large homeless population.

“Empty” plots may have no formal development, but they are not devoid of activity. Mechanics fix cars and tea stalls set up seating here during busy hours. An outdoor school for working children is even occasionally run out of a vacant lot next to a busy street in the Defence Housing Authority area.

Tape-ball cricket is said to have been born in Karachi’s Nazimabad neighbourhood and popularised on these streets and empty plots. It’s possible that cricket’s ubiquity would not have been possible without these wide-open undeveloped patches of land. Some of Pakistan’s cricket legends—including Akhtar and Wasim Akram, two of the greatest bowlers Pakistan has ever produced—developed their skills with a tape-ball in such spaces. Shoaib Akhtar’s father was a night watchman at a petrol station. Yousuf Youhana, one of Pakistan’s best batsmen in the early 2000s, is the son of a street sweeper. While empty plots represent stagnation in formal development, informally, they are sites of significant movement. Here the boys of Karachi’s urban poor are momentarily within reach of a path to stardom and international recognition.

Like many cities across the global south, Karachi is obsessively trying to achieve elusive “world-class city” status in the hope of attracting global investment. In the pursuit of these ambitions, spaces for the recreation or economies of the poor hold little value. The dusty weekly matches played by Zohaib and his friends have no role in this idealised city. Formal public grounds have been built over. Karachi’s “empty” plots represent a blip—a short pulse—in the development of the neoliberal city where unwittingly, breathing space has been created and seized by an urban majority that is otherwise squeezed by development.

Eventually, the sites where big cricket games are played every Sunday, open-air schools operate and makeshift tea stalls buzz late into the night will be turned into malls or expensive housing, like the planned Defence Housing Authority Phase 8. In that future, Zohaib and others like him will, in most cases, only be able to enter these new upper-class developments as servants, drivers, or security guards. Until the “empty” plot is walled off and the excavators move in, the weekly games will continue.

Kevin Shi is a writer and researcher based in Karachi