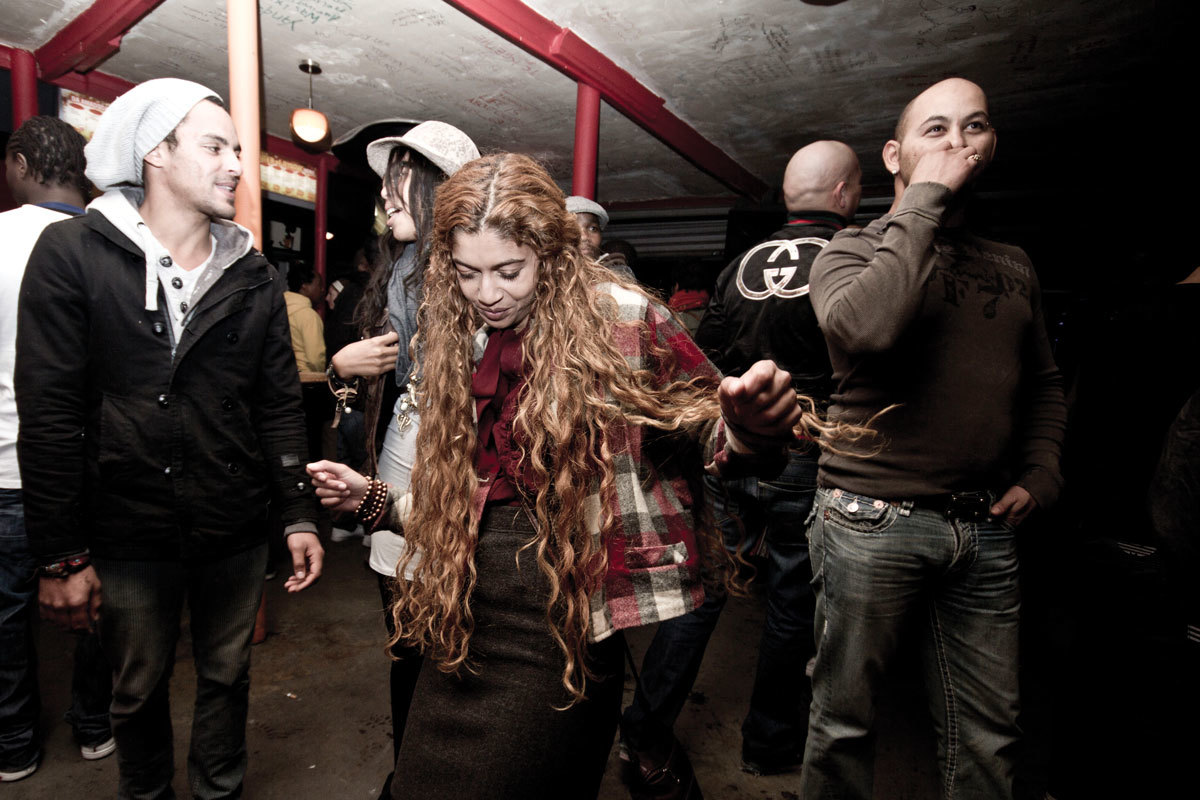 Situated at the southeastern edge of Cape Town’s inner city, Woodstock is an ethnically, religiously and financially diverse community. Gentrification is, however, changing the outlook for many of its long-time residents.

Lutfie Majiet is working on his third client in 40 minutes. His scissors skim the man’s ears as he makes his point. “Youngsters?” he asks. “The only time you’ll see a teenager in this barber shop is when his grandfather, his father and his brother before him all had their hair cut here.”

His clients—most over 60, with deep roots in Woodstock, where Majiet has lived all his life, or neighbouring Salt River—mutter and nod. Besides bioscopes, and development, the topic this morning is the local youth, all too many of whom, Majiet says, wear R2000 takkies but are hopelessly unemployed.

“We were talking about new development,” Majiet says, snipping furiously against a backdrop of photos of District Six. “These people who have moved into Woodstock employ cheap labour: foreigners.

The original people from Woodstock don’t get the opportunity. If the children could get work, then they wouldn’t hang around on the corners… that’s when the merchants get them.”

Majiet, 63, has grown-up children who have not succumbed to the drug merchants, despite being surrounded by some dozen-odd drug houses where they grew up, near the William Street mosque. His oldest son works for Blue Ribbon bakeries; his daughter for Standard Bank. They are a hard-working family, and like many in Woodstock, welcome the waves of creatives and developers who began filtering into the area in earnest in around 2006, in search of space close to the city centre, and cheap rent.

Developments like those now sprinkled along Albert, Sir Lowry and Victoria Roads “put the area back on the map,” says former resident Clarence van Vrede. Yet Majiet has never set foot in the galleries, boutique stores, or trendy restaurants. His leisure pursuits—he’s a huge draughts fan—are less consumerist. But every so often, the two worlds intersect. Like when property developer Andre Potgieter slips into his chair for a R40 haircut.

Potgieter is something of a renegade. Immaculately dressed, he sips soup and wine on the deck of his most visible development, The Bromwell, once a run-down brothel and declared health hazard, now a showy boutique mall with a doorman in a top hat at the door. The deck lies over the remnants of Gelb Lane, which just three years ago was, as Potgieter puts it, “infested by bergies and street shebeens” (the street people were eventually moved on by authorities). His waiter calls Potgieter “Godfather”; young professionals dancing at his “township” themed eatery aMadoda! (off Albert Road) say they’ve heard he’s Italian. He’s not.

Potgieter is a “boer” previously involved in the “low-cost housing market” in Gauteng. Ten years ago he moved to Woodstock, following his daughter, who had set up the advertising agency Mad World, and son, who had joined her. And he began buying property.

“I believe Albert Road has to become the next Fifth Avenue, as in New York,” he says, “or the next Oxford Street, as in London. This is where it’s going to happen.”

The family’s first purchase was a R1-million “shell” in Treaty Road, now Mad World headquarters. Next to the building, a twisted, surprisingly short milkwood tree stands in a forgotten park—in times gone by, transgressing slaves were hanged here. Potgieter is a true believer in the Woodstock revival, as it’s often dubbed. His personal (and, without a heavyweight partner, financially unreachable) dream is buying up all buildings along a swathe of Albert Road, building a “cohesive, aesthetic” mixed use development including affordable housing, and pedestrianizing it. He’d also like to see historical tours, and B&B options for tourists in local homes. “We want to integrate the ghetto with the gallery,” says Potgieter. “But we’re not land barons. Mad World believe that if you start affecting positive change, not in the bulldozing way typical of some Western tycoons, but buying buildings rich in heritage, restoring them to their former glory and creating within them attractions, this will not only serve the suburb but draw people from other suburbs and other countries too.” Woodstock is Potgieter’s hood, and “without wishing to become too poetic, we live the Woodstock dream”.

Lutfie Majiet and Andre Potgieter: two different people, two wildly different Woodstocks. The neighbourhood divides are multiple: working class and upwardly mobile; lower and upper Woodstock, Muslim and Christian. Never mind race, which saw areas like Pine Road in upper Woodstock bulldozed under the Group Areas Act and industries in Salt River shifted to places as far away as Atlantis. Decay and crime ate up lower Woodstock in the 1980s and 90s.

The city began debating how to revitalise the Woodstock area in 2003. It recognised that providing an “efficient and qualitative living environment” would be complex, that privatisation could have unwanted spin-offs, including further dislocation of the poor.

But in Woodstock, private development has been the key feature of improvements to date; resources for public facilities remain scarce. Current policy promoting the idea of Cape Town as a creative city—or Design Capital—is justifiably upbeat about how creative industries can help divided areas reinvent themselves. As Andrew Boraine, Chief Executive of the Cape Town Partnership, has highlighted, Cape Town’s bid for Design Capital is not about high-end “stuff”, but aiding social and community development and designing a “more inclusive economic vision”. Design can be a tool for progress. But, it’s how progress is measured that gets interesting. For some, it’s a wave of new development. For others, railings around the local park, or a low-key refurbishment of the local town hall – places that locals use – are just as exciting.

It is local government election day. Voters pause outside Woodstock Town Hall to discuss their neighbourhood. Community worker and councillor candidate Tahir Levy speaks of high rates and rentals sending working class families to Blikkiesdorp and the townships, and African “foreigners” moving in. Masturah Solomon laments a lack of facilities for youngsters. A young hipster with skinny legs says that when he thinks of Woodstock, it’s “the Old Biscuit Mill, it’s young, trendy, up-and-coming designers – and it’s real, you know?”

Furniture designer Haldane Martin moved into Woodstock in 2008, buying an old NG church that had already been home to a motor mechanic, a carpenter and a movie production house. It met all his criteria: it was “a building with character, it was affordable, it worked spatially for my needs,” and it was close to town.

There is a certain ‘naivety’ in expecting South African design businesses to be a panacea for social ills, with their complex systemic roots

He liked the scale and mixed-use nature of Woodstock; the edginess—and since the Woodstock Improvement District, violent crime was down. He is a believer in design as regenerative in that it simply “makes cities nicer to live in, more interesting from a cultural perspective”. But he thinks design needs to develop as a real economic force, rather than a side-industry granted a tentative kind of “nation building” status.

There is a certain ‘naivety’ in expecting South African design businesses to be a panacea for social ills, with their complex systemic roots. While his studio provides employment to crafters, and he is very conscious of materials and resources, he finds there is a danger of a kind of stereotyping. For example, international clients expect a positive narrative behind designs.

“They want to see the weavers,” says Martin, “they want that little story: how we’re helping the marginalised. It’s very sweet, and there’s no doubt the business has gained from having this side to it, but we need to move on to the next level.” Designers should aim to be world class, not “keep playing the poor me card, the happy rainbow nation card—we’ve got to go beyond that.’ He wants to see design businesses become real brands with clout in the region.

There are interesting echoes here in the language used by authorities and developers about how creative industries can lift an area. Diversity is often lauded as an attraction, but seldom actively protected. Nobody challenges that creative businesses are good for Woodstock—it is, as furniture designer Liam Mooney puts it, a “no-brainer”. But gentrification is real. In an area like Woodstock, development doesn’t casually bring a better life for all. It brings conflicting needs. 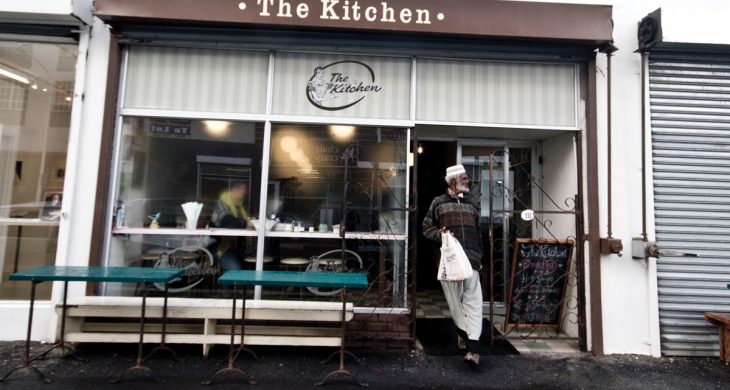 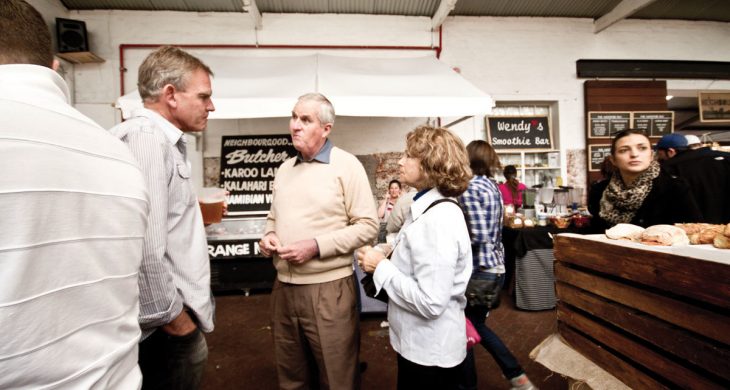 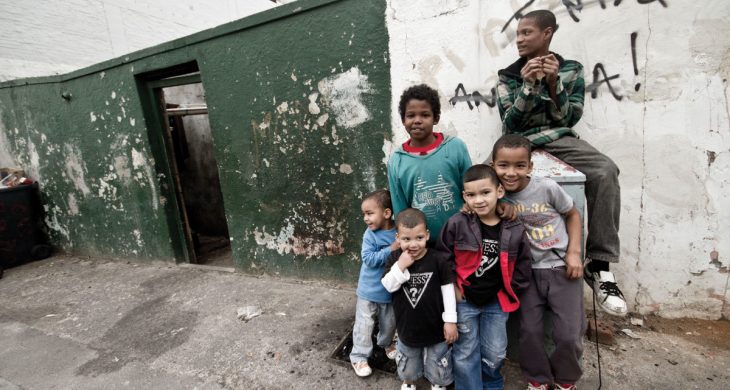 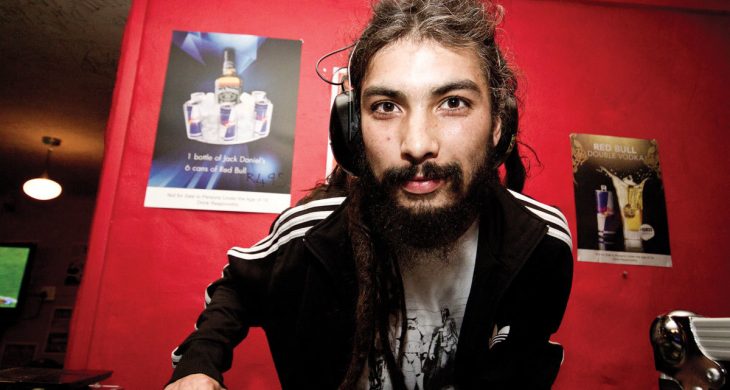 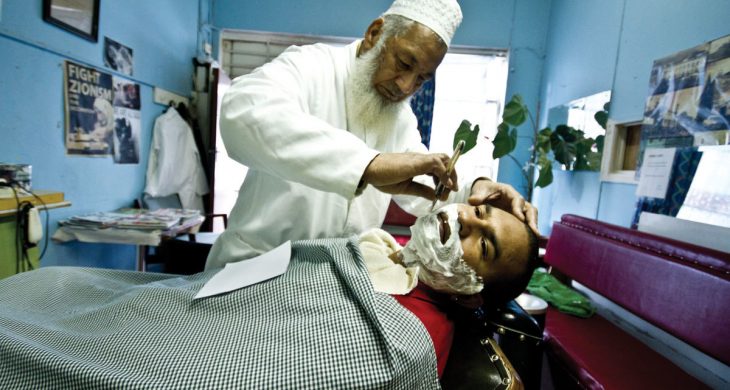 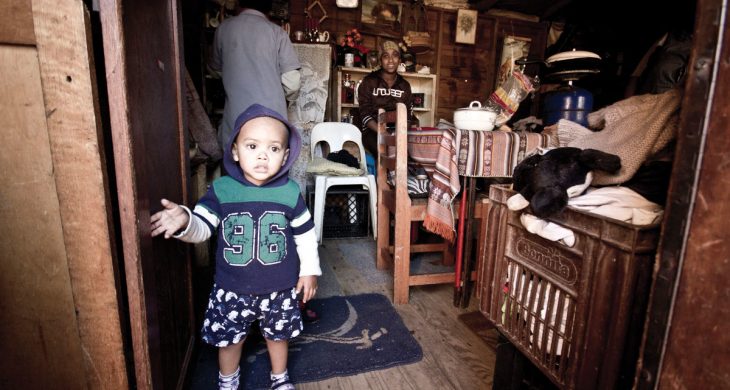 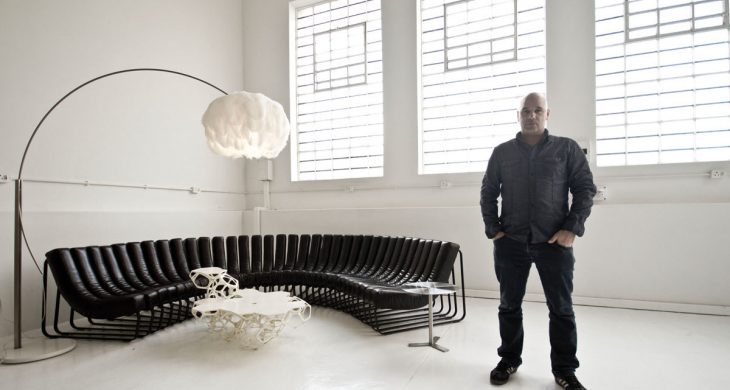 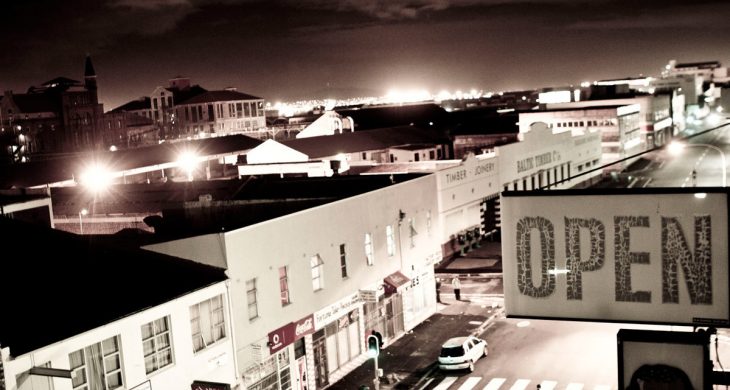 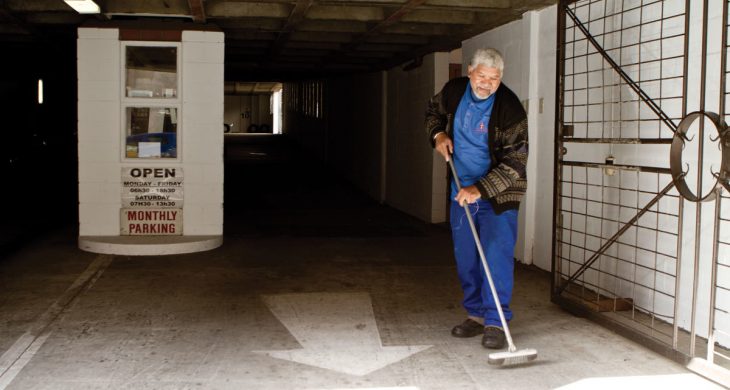 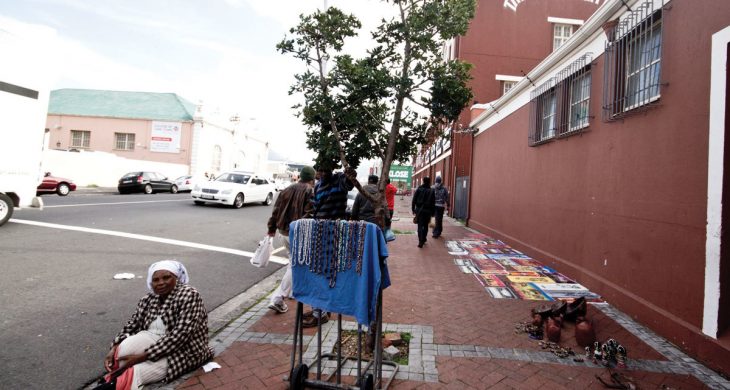 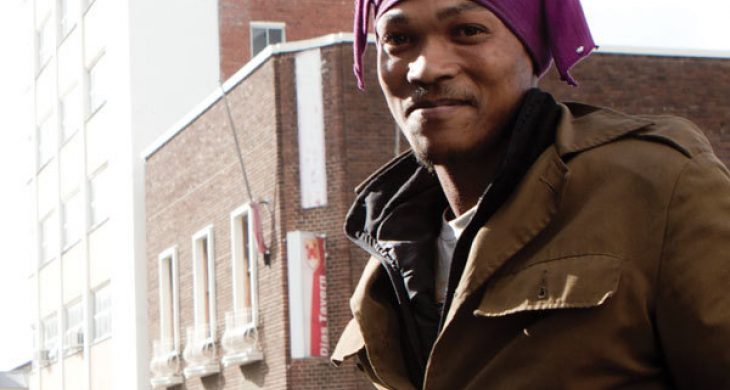 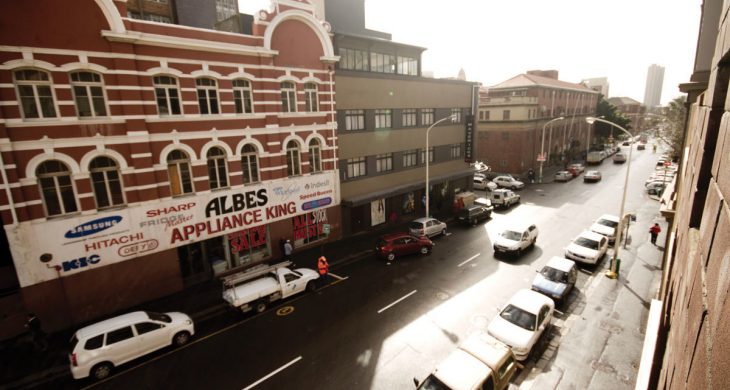 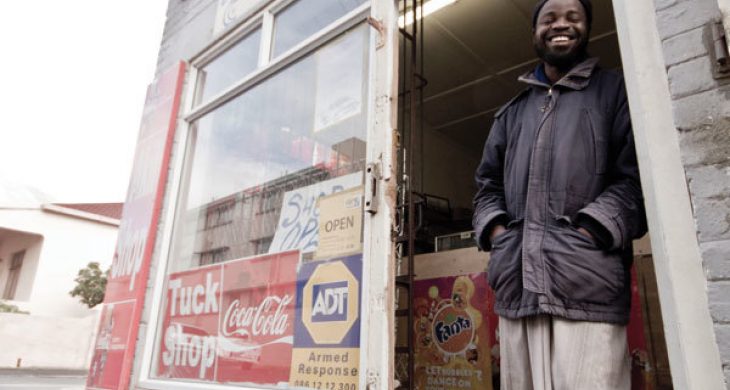 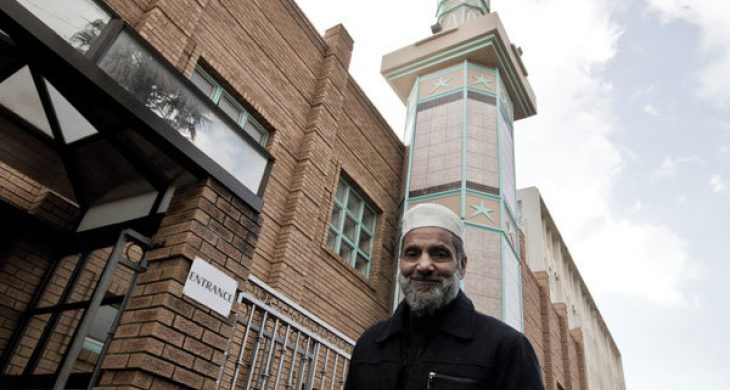 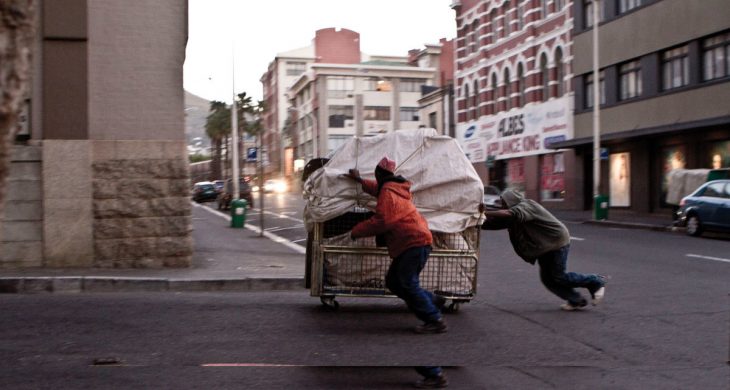 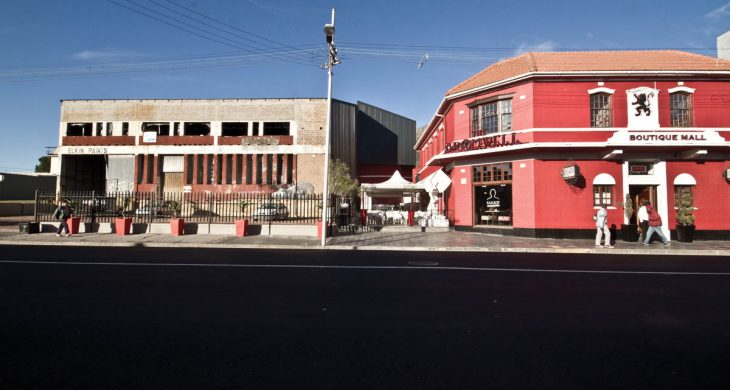 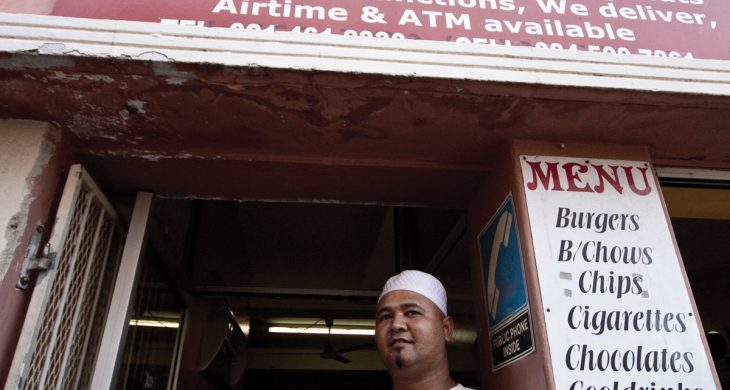