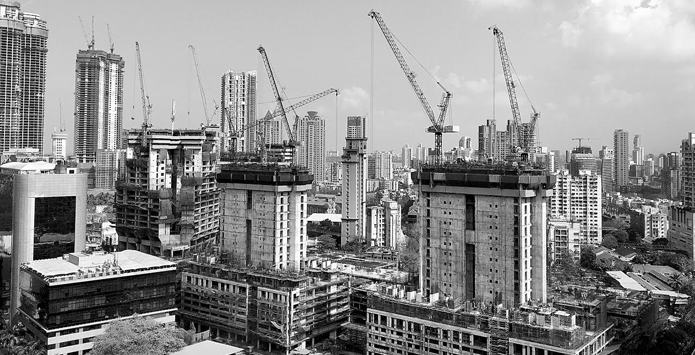 In the last 20 years, Mumbai has transformed into a city dominated by skyscrapers. Vyjayanthi Rao on how some residents have begun to fight back against unrestrained development of the city's neighbourhoods

In the 1980s and 1990s, it was commonplace to hear that upwards of 5,000 people were moving to Mumbai every day. The Indian State’s seeming neglect of urban development in favour of agrarian reform and rural development was reflected in a general political unease towards cities. Cities were seen as unruly sites of gathering. They were viewed as unpredictable political spaces, into which vast numbers of people were moving daily. This understanding set the tone for the xenophobic violence and gangsterism of the period that preceded the fully-fledged globalisation of the Indian economy in the 1990s.

In Modi-era India, the numerical anxiety has given way to a more verbose suspicion of neighbours and neighbourhoods that are perceived to harbour anti-national sentiment. The current mood is very different from the comparatively more intimate forms of violence experienced by many Mumbaikars who belonged to minority groups during the bloodshed of the 1992 riots, sparked by the destruction of the Babri mosque in northern India. The Babri riots prompted introspection that resulted in the appearance of the first collections of scholarly essays on Mumbai’s fabled modernity, which had suffered a grievous blow as a result of the riots. If Mumbai’s modernity had been taken for granted before, it was now called into question as it was clear that the cosmopolitan and convivial “spirit” of the city had been irrevocably injured by the heinous acts of violence against minorities in plain sight.

By the early 2000s, there was broad collective experience and perception of change across different classes and social groups. A radical physical change was occurring. Skyscrapers and slums were mushrooming across greater Mumbai, leaping through a bewildering array of regulatory loopholes designed to both constrict and expand the supply of buildings. The polarity of these regulations, which sought to allow two opposing principles simultaneously, was puzzling. Everyone attempted to understand the sort of built forms and communities that would emerge from the confusion. It took a collective effort across multiple disciplines to begin to comprehend this loophole-urbanism that was turning Mumbai inside-out and upside-down. Before our eyes, Mumbai was transforming into a vertical city.

Mumbai’s “megamorphosis” (as a 2009 conference that highlighted ideas to “make Mumbai a world-class city” once called it) is already a thing of the past. In less than two decades, citizens have become entangled in a reality dominated by tall buildings. These have varying footprints but are shooting skyward between the congested by-lanes of the historic centre. Mumbai is now home to thousands of high-rises and hundreds of skyscrapers. It’s currently one of the largest construction sites in the world. Alongside these domineering giants are multiple congestions. Settlements of tiny dwellings, packed into improvised streets, are increasingly out of view but still unavoidably in the centre of things. They are stuck with the label of “slum”; places to be skirted around and whose fate is yet to be settled. More than half of Mumbai’s millions live here.

It is impossible to fully comprehend either the socio-economic or political culture of the 2,000 settlements within the jurisdiction of the Municipal Corporation of Greater Mumbai (MCGM) that have been legally declared “slums”. There are enormous variations amongst these settlements concerning security of tenure, connections to water, sewerage and electricity, and forms of leadership. Since 2014, I have worked with the leaders of a community in north-east Mumbai called Sathe Nagar, named after a famous Marathi literary figure with roots in one of the large Dalit communities in the region.

In 1982, the leaders of the Dalit Matang community decided to bring their fellow caste members scattered across Mumbai together on vacant land attached to an old soap factory. Its proximity to Mumbai’s main landfill meant that many of the settlers and their children found jobs as rag-pickers and scrap dealers. Sathe Nagar has since grown into a dense and crowded neighbourhood, with tiny homes strung along narrow pathways that are always subject to repair and renewal. A large number of its residents find employment within the settlement itself, providing various services to the community, including construction services, food preparation, vending, tailoring, and education.

Similar large infrastructure initiatives have already displaced millions of slum dwellers since the early 2000s. Some have ended up in a settlement adjacent to Sathe Nagar called Lallubhai Compound

More recently, the Mumbai Metro project has provided more jobs. The project is creating hundreds of kilometres of new railway lines above and below ground. When completed, they will criss-cross the metropolitan region and expand the imaginary of the city itself well beyond the territories represented by the MCGM. As in other Indian cities, the metro feeds into an aspirational fantasy of a unified urban region, although, for its builders from Sathe Nagar and elsewhere, it foretells displacements to come.

Similar large infrastructure initiatives have already displaced millions of slum dwellers since the early 2000s. Some have ended up in a settlement adjacent to Sathe Nagar called Lallubhai Compound. The compound comprises 140 buildings on a brownfield site. Each seven-storey building contains about 80 units. The size of each family unit: 20 sq metres.

This extraordinary collection of buildings has been developed by numerous real estate companies. Their primary aim is to maximise the number of displaced families that can be rammed into each site. In exchange for this “fitting up,” the developers gain free access to land parcels elsewhere in the city, where they put up buildings that only the wealthy can afford. Lallubhai compound’s planning—typically, there is a distance of fewer than three metres between buildings, and no direct sunlight or ventilation—has already led to the spread of diseases like tuberculosis. The structures are unmistakably dilapidated, a mere 15 years after they were constructed.

Lallubhai, constructed to accommodate people displaced by infrastructure developed to enable the movement of people and automobiles, has become a point of congestion, a node of stasis and stagnant air. Watching it grow over the years from the vantage of neighbouring Sathe Nagar, one wonders if this forebodes the future of Sathe Nagar itself. However, there is no denying that Lallubhai has become a vibrant hub in its own right. Its self-built markets and self-provisioned transport networks provide the services that developers neglected to consider in the first place.

The tale of these two adjacent settlements provides an insight into Mumbai as a whole. Both settlements are artefacts of an urban development model that has come to rely upon air rights (the space above the site, commonly known as “floor area ratio” or “floor space” in India) while battling to provide urban infrastructure at scale for the public at large. Under the guise of the public good, the distribution of air rights has resulted in for-profit, market-rate property development at the expense of housing and infrastructure for the poor majority.

The last two decades have seen a series of ebbs and flows in investment and political cycles that led to unpredictable spurts and lulls in activity on construction sites throughout the metropolitan region. Between these cycles, there has been a tremendous growth of interest in the development process itself. Whether from the narrow perspective of reaping profits from real estate or that of urban growth and its effects on the broader population of the city, there is a newly heightened consciousness of how the development processes that are changing the fabric of the city take place.

An excellent example of this awareness is the public process surrounding the 2014-2034 Development Plan drawn up by the Municipal Corporation. During the community engagement period, which invited public comment and input on the plan, the Urban Design Research Institute staged a kind of coup d’etat of the process. The non-profit body of architects, preservationists and planners turned this otherwise closed process into a truly public conversation. They persuaded the MCGM to hold hearings in every ward. Also, they intervened with alternative suggestions to the proposed floor area ratio-driven model presented. After a four-year process, an imperfect version of the Development Plan was finally ratified in 2018. In many ways, this marks a new era for the city. Yes, market forces might have triumphed over civil society with the collusion of representatives of the state, but the public’s participation and increased awareness of planning and zoning gave the people who are subject to these plans a foot in the door.

How one acts, identifies allies, and what or how they are aligned within this milieu is not always clear. The answer can no longer be confined to “community”—that which generations of urbanists have sought to protect and secure, but still struggle to define. In this rapidly morphing city, amidst all its movements, the city has become a place where it is necessary to rethink our approach to politics in an era of non-community. A public process such as the one that unfolded around the development plan is perhaps the closest one might come to a unified politics of the city.

It’s a politics of alliances rather than of interests, of the commons rather than of community. The right to participate in shaping the city can only become meaningful if it acknowledges the city as a constant experiment in scale, a series of continuously evolving lines of flight, and as the persistent refinement of contradictions and the continuous performance of practical actions.

Vyjayanthi Rao is a researcher based between New York and Mumbai