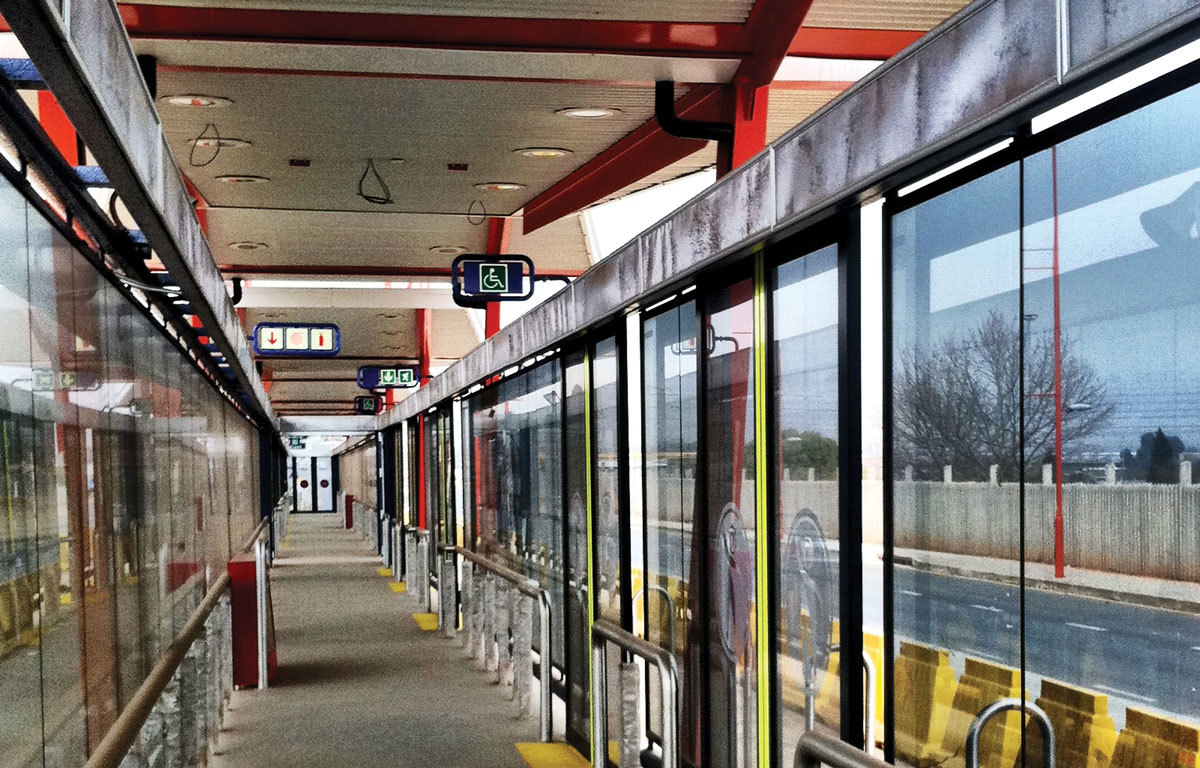 In the slow lane

The signboard gracing the Rea Vaya bus station in the heart of Johannesburg’s regenerating inner-city Fashion District has one neon message emblazoned across its entire surface: “ZZZZZ.” It suggests the current failings of the smart new bus rapid transport (BRT) service, launched ahead of the 2010 World Soccer Cup to initially link Soweto with the CBD.

Not only is the signage generally dysfunctional but Rea Vaya is missing an ideal moment to capitalise on public transport momentum as it readies itself for third-phase expansion.

Students at the Faculty of Art, Design and Architecture at the University of Johannesburg (UJ) researched Rea Vaya for an undergraduate assignment co-ordinated by multimedia lecturer Terence Fenn. Sabelo Ngobase suggests that with pending freeway tolls, the operator should run a campaign akin to an election blitz.

“They need to give people more information, signage,” he says, “and public announcements.”

His fellow researcher Tanita Murray says of Rea Vaya’s shortcomings: “[As] with taxis, if you know your signs, you are fine. If you don’t … then you’re going to go for a very long ride!” She adds: “We are very private-vehicle dependent. With Rea Vaya, it only operates until 9pm, but at least you know … you will get home safely.”

Indeed, the mid-July fuel sector strike illustrated just how attached motorists are to their cars as panic-stricken queues formed at service stations. But the reality is Johannesburg’s drivers are facing a protracted multi-pronged assault. In addition to tolls for the Gauteng Freeway Improvement Project, there is constant congestion from transport upgrades, general economic activity and increased urbanisation.

...the stations are equally impressive, and a slick service seems to run on time. Yet navigating the system is an alienating experience...

In many European cities, urban planners are deliberately inconveniencing motorists with strategies like more closely spaced traffic lights, no-car zones and fewer parking bays. Johannesburg is rather upping the public transport ante. In addition to expanding Rea Vaya, the high-speed Gautrain rail service is now linking up Johannesburg with Tshwane (Pretoria). And Metrorail already runs a popular Business Express between the two centres.

“We cannot build ourselves out of traffic gridlocks on our roads and freeways,” Ismail Vadi, the MEC for Roads and Transport, told the Gauteng Legislature on July 5. “We must develop and integrate our public transport system… to a point where commuters—both working and middle classes—would consider public transport rather than private transport as a mode of choice.”

This potential market, according to Wits University’s Gauteng City-Region Observatory, is substantial: 67 per cent of respondents in a 2009 quality of life survey used public transport daily. Taxis were the most popular (95.6 per cent), followed by trains and buses, with one-fifth using multiple modes.

Ngobese says a prime motivator for residents in Soweto to switch from taxis to Rea Vaya is cost, especially among youth, as well as taxi strikes. He says older commuters are more influenced by safety and comfort.

Certainly, many are converts—buses are full, even on afternoon inner-city routes. They are smart, the stations are equally impressive, and a slick service seems to run on time. Yet navigating the system is an alienating experience for a newbie that requires a lot of asking around. Some suggestions from the UJ researchers include more automated processes like cashless payments, signage in other languages besides English, improved mapping schematics, commuter alerts and interfaces for a variegated target market rather than some generic notion of a standard passenger. Operators like Rea Vaya need to become more responsive to the new user experience to get more bums on public transport seats. It could start with waking up the signboards * —Kim Gurney

Kim Gurney is an artist and journalist based in Johannesburg