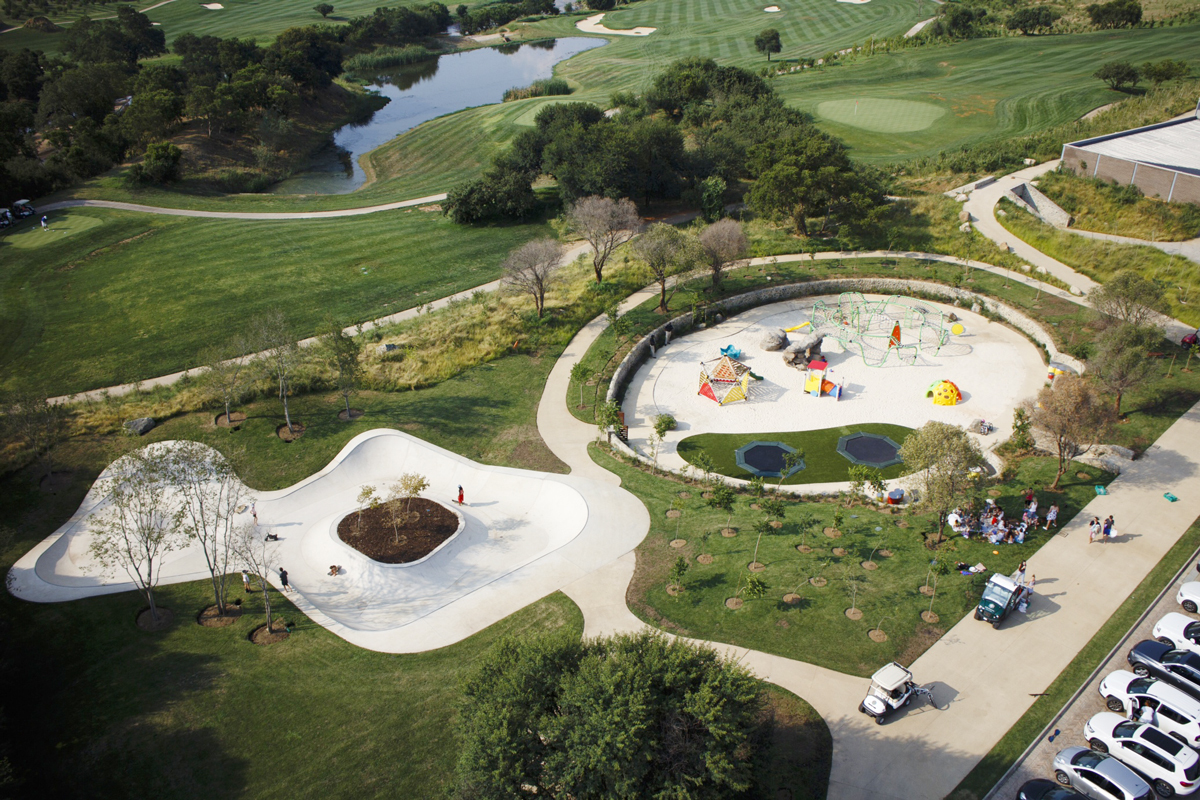 Life in the Magic Kingdom

Private developers are remodelling Johannesburg at its urban edge

The creation of a city is something that normally happens over hundreds of years. But then Gauteng isn’t given to normal. Here, dozens of planned cities are sprouting up, some with plans to function as actual cities worldwide do, open to all who would come. Others are less inviting. Take Steyn City. The video on the development’s website takes you soaring over its would-be environs, much in the same way Soarin’ Over California, a ride in Disneyland’s California Adventure Park, takes riders on a virtual hang-gliding tour over the regal Golden Gate Bridge and Malibu’s white sand beaches, complete with ocean breezes and a spritz of orange scent as you glide over lush farmland in the state’s Central Valley.

In Soarin’ Over Steyn City, you glide over another sort of fantasyland: kids rolling around in their own skate park, galloping on horseback through woodlands, climbing over land art with stone limbs that gently protrude from the earth. Men and women of all races jog along manicured pathways, plunge into blue waters, dine in the dim light of a clubhouse and picnic on luminescent lawns. Says the website, which is lathered in comparisons—at least in size—to Monaco and New York’s Central Park, this 800 ha development with plans for 10 000 homes is “founded on the principle of community”.

Unfortunately for the nearby community of Diepsloot—and the 20 000 residents from Zevenfontein, who once occupied the land, but were relocated to nearby Cosmo City—Steyn City is not at all a city like Monaco or New York. It is a walled city, an appropriated expanse with its very own 60 km of bike paths for use by those who can afford the entrance fee. A one-bedroom apartment costs R1.6 million. The rock bottom price for a freehold stand (without a house) is R2.3 million. Just the latest of Gauteng’s many magically gated kingdoms—nearby Waterfall Estate is another—Steyn City resides in the shadows of Auto & General founder Douw Steyn’s enormous R250 million Tuscan-style villa, which is encircled by an actual aqueduct.

Of course, Steyn City Properties CEO Giuseppe Plumari will tell you about the 11 500 jobs created, and the R300 million poured into infrastructure, such as the road leading to the estate. At the launch in March 2015, Graca Machel, the Mozambican politician, humanitarian and widow of Nelson Mandela, planted some saplings. Her departed husband, a long-time friend of Steyn, had “planted the seeds” for those very saplings back in 2007 when the development first broke ground. At the time, Plumari hit back on the obvious and long-running commentary about the development on Diepsloot’s doorstep.

“That’s the very thing we’re criticised for—opulence next to poverty—but that’s exactly where developments should be to empower people to get jobs, so they don’t have to spend half their salary on transport,” Plumari told The Guardian. Plumari knows better than most that major job creation, massive infrastructure development and transport—specifically “transit oriented development”—are more than just provincial buzzwords, they are a major driver of policy.

Steyn City is not at all a city like Monaco or New York. It is a walled city, an appropriated expanse with its very own 60 km of bike paths for use by those who can afford the entrance fee

Scholars have noted the increasing privatisation of South African cities. Speaking at the launch of two new books on the South African city, Changing Space, Changing City: Johannesburg after Apartheid (2015) and Urban Governance in Post-apartheid Cities: Modes of Engagement in South Africa’s Metropoles (2015), political scientist Adam Habib remarked: “Effectively you have private agencies establishing their own urban node, with their own governance arrangements, with their own service delivery functions. They’re effectively cities within a city.”

Another mega city across town suggests a slightly different approach. In 2013, the Hong Kong-listed Shanghai Zendai Property scooped up 1 600 ha adjacent to Tembisa, Alexandra and Ivory Park with plans, promised owner Dai Zhikang, that his Modderfontein New City would be like New York or Hong Kong, complete with massive skyscrapers, and its very own Gautrain stop. The R87 billion investment will take 15 years to complete and result in 35 000 homes. The development will include office space, light industry, five schools, a hospital and medical centre, a convention centre, a sports stadium and, according to at least one local publication, a theme park.These new “cities” are just two of the many mega developments mentioned by Gauteng Premier David Makhura in his state of the province address in February 2015. The emphasis of the grand plan around the province’s five corridors (Steyn City and New Modderfontein City sit in the Central Corridor) is backed by the push for massive infrastructure development projects that come with big-number job creation and transit hubs. In the so-called Southern Corridor, Makhura tagged the Vaal’s River City development, a private-public partnership on 250 ha, boasting an estimated R7 to R11 billion investment and the creation of 7 500 jobs.

Steyn City’s Plumari sold the land to a black economic empowerment consortium not long ago, but he still retains a 30% shareholding in the development. River City promises retail, healthcare, parklands, a bird sanctuary and apartments at a more down-to-earth range of R400 000 to R800 000. It’s being billed as the “first post-apartheid city”, which is at least a move away from fantastical city comparisons that would have us be anywhere but here.

In a recent blog post, city planner Rebecca Cameron noted that the rise of the mega city project raises many questions, ranging from the use of far-flung greenfield sites outside of the urban edge with associated infrastructure and service costs to the role of private investment in achieving a developmental state mandate. She also remarked the inflexible design and troubling architectural styles employed in these cities, which are often “highly complex and leave little room for change, growth and additions over time”. The realities of urban life in South Africa, such as informal trading and settlement, are also left out of Gauteng’s magical lands. Perhaps the Modderfontein New City theme park in can help with that

Tanya Pampalone is the executive editor of the Mail & Guardian