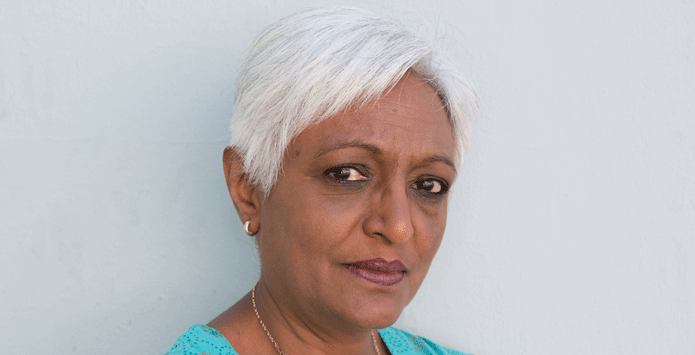 Gita Goven is an architect and humanist with an experience of hardship. Gita’s biography has shaped her vision of architecture’s possibilities. Her studio specialises in the design of integrated and sustainable human settlements. It is urgent work. Housing and the restoration of human dignity are central to the post-apartheid project

Gita Goven is a 55-year-old mother of two whose life story encapsulates the struggles endured by previously disadvantaged groups, especially women, during the dark years of apartheid. From sharing a tiny bedroom with five family members in Springs, a mining town east of Johannesburg, where she grew up, to now owning an established design practice in Cape Town, Gita is an example of what courage and drive can achieve. Gita founded ARG Design (ARG) in 1999 with two business partners, István Gosztola and Alastair Rendall, who is also her husband. The practice, which comprises a team of 20 “co-creators”, specialises in urban design, architecture, environmental management and landscape architecture. A key statistic underscores her achievement: only 24% of built environment professionals in South Africa are black; 9% are female. Being one of the few black women owning an interdisciplinary design practice in the country, Gita’s successes stand out even more.

“As a young woman, especially being black in a more white environment, it was very difficult,” says Gita, whose diminutive stature and soft-spoken manner belie her many achievements as an architect. “People often assumed I was either the secretary or the junior even though I was the principal in the practice”. Gita learnt to be assertive and demonstrate that she was the “architect in charge”. Despite having to adopt a tough approach in dealing with other professionals, Gita has a private, more homely side to her. She enjoys cooking and reading; she has visited more than 60 cities globally. “The people and the food of these places and the life of the city and quieter places of the soul all are interesting for me,” she says.

Professionally, Gita has emerged as a key figure in post-apartheid housing programmes, her practice specialising in the design of integrated and sustainable human settlements. As an architect, she has been involved in a number of innovative projects addressing problems associated with housing, a key issue nationally. Since 1994, government has been battling to eradicate the staggering housing backlog, which has swollen to 2.3 million units in 2014, up from about 1.5 million in 1994. The government claims to have built 3.6 million houses over the last 20 years, with plans to deliver about 1.5-million houses—and “housing opportunities”—over the next five years. The provision of free housing may however cease.

Minister for Human Settlements Lindiwe Sisulu recently said that she would like to see the state move away from the large-scale provision of housing for the poor. She pointed out that this provision creates a syndrome of dependency. Sisulu stated that the housing backlog would take another eight to ten years to eradicate. The Financial and Fiscal Commission estimates that it would cost government approximately R800 billion to eradicate the housing backlog by 2020, money that central government will struggle to raise on its own in the face of an underperforming economy, growing unemployment and stagnant tax revenues. It will, therefore, be crucial to build more partnerships with the private sector to address the housing problem.

ARG performs an important role, functioning as an interface between state and private interests. To date ARG has worked on a number of projects in housing, education and transportation, including bus rapid transport stations in Cape Town, Rustenburg and Ekurhuleni; informal settlement upgrade development frameworks; small town regeneration projects in the Eastern Cape; the Blue Downs Swimming Pool; Lynedoch EcoVillage, a sustainability research institute near Stellenbosch; and concept planning on the much talked about WesCape, a large-scale urban development project that could potentially transform the West Coast corridor north out of Cape Town. Common throughout these projects is ARG’s emphasis on sustainable design principles broadly aimed at improving the livelihoods of especially low-income families.

“Healing is for me a very important thing,” says Gita. “I think our society needs a lot of healing.” She says her work focuses on how to create places that are “wholesome, healing, and where people can both feel free to be who they are, as well as love and respect the places and spaces they use everyday”.

ARG is situated on the fourth floor of Premier Centre in Observatory. The large building faces onto Main Road, a key thoroughfare, and is also home to the Centre for the Study of Violence and Reconciliation and an alliance of human rights organisations known as the National Alliance for the Development of Community Advice Offices. ARG’s office is buzzing when I meet Gita on a wet Friday morning. Gita, who wears black pants and a bright jersey, is recovering from a cold. She coughs occasionally as she tells me how she came to study architecture at the University of the Witwatersrand (Wits). Gita grew up and matured into adulthood during the height of the apartheid system; the suffering she endured directly influenced her decision to enrol in an architecture degree at Wits in 1977, a year after matriculating.

“I thought that architecture can make a difference because I grew up in a context where I could see that black people were not getting good architecture,” says Gita. However, Wits in 1977 was still a segregated university with only a few places open to black students. “I had to get a special permit from the government to study. Your results had to be good and you had to show that the course you wanted to do was not offered at an Indian university.” The only tertiary institution for Indians was the University of Durban-Westville, in Natal; it didn’t offer architectural training. So Gita was accepted to study architecture and engineering at Wits.

Her parents were confounded by her decision; they wanted her to take a degree in medicine. “They did not understand the world of architecture and engineering,” she says, highlighting a drama repeated in many low-income families where study offered—as it still does—a way out of penury. “I grew up in a community where the only professional person was a family doctor.” LOGIN TO READ FULL ARTICLE