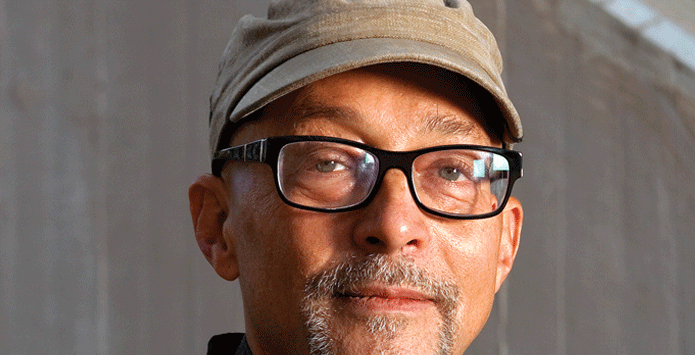 On a recent visit to Johannesburg, urbanist AbdouMaliq Simone spoke with philosopher Achille Mbembe about his peripatetic early life, his formative investigations into urbanism in Khartoum, the influence of Islamic thought on his academic output, also living and working in South Africa at a time when Senegal was confused for a town near Bloemfontein.

AM: Some of the meta-theoretical narratives that dominated the 1970s, 80s and 90s today seem to have dissipated. There is, one feels, a kind of emptiness in terms of powerful ideas that could renew our understanding of the city form in a variety of places, not only in the north, but also in what we’ll call the south. It seems to me that your work, the work you have been developing over the last three decades, represents a voice that is, as far as I’m concerned, extremely original and needs to be heard. So I thought that maybe what we could do is to create a space in which you yourself open doors of your work, and take us by the hands and show us whatever you want to show us from the interior of that home. I would like to start with the Khartoum period. How did you end up there? What led you to produce that book on political Islam and the city in Sudan?

AMS: Like many things, these kinds of engagements were largely accidental and fortuitous. I was in a critical period of my own political work, in relationship to various strands of Islamic activism, and part of that was a kind of participation in a project at the time on Islamisizing the human and social sciences. I half took it seriously and half with a lot of scepticism, so I thought that at best if I was going to continue in that vein to try take some time away from being a psychology professor at Medgar Evers College in Brooklyn, to do something different.

At this time the International Institute for Islamic Thought asked me if I wanted to go to Khartoum. I said, ‘Well, I don’t know Khartoum, and my Arabic is really bad.’ ‘Don’t matter,’ they said, ‘would you like to?’ I discussed it with my kids, step kids and my wife at the time—and off we went. The thing is that I didn’t know quite really what they had in mind. I was appointed as visiting associate professor of psychology at the University of Khartoum. It was basically an Islamic Brotherhood department in a very politically contentious university. The salary was $80 a month, which they offered to top off. To this day I never could understand exactly what it is that they expected of me.

To some extent I think maybe they wanted some kind of American Muslim academic to be there as a showcase, but in my almost three years there the university was rarely open. It was around the time of the 1989 coup where Hassan al-Turabi [a Sudenese religious and Islamist political leader] and a lot of different forces were jockeying for power. The university was closed down most of the time. So what does a boy do, you know?

In cities there are always different kinds of actors—collective, institutional, associational—looking to use the city as a way in which to do something. There happened to be a theatre school, part of the university; it was the only thing that wasn’t balkanised. They knew that they were the one remnant of a kind of institutional form in Khartoum where there were communists, southerners, westerners, where there were all kinds of political tendencies and people from different kinds of backgrounds.

And so they knew also that this kind of thing wouldn’t last in this larger environment unless they themselves could somehow actively find a way to work together in Khartoum in a way that required them to somehow have a kind of exchange, some kind of interaction. So it was in some ways fortuitous that we did this project on Khartoum: we organised an investigative team that also relied upon the theatre to perform in different kinds of neighbourhoods, different kinds of districts in the city in a way which in some senses disarmed people. It wasn’t like doing household surveys and stuff; it was about making people curious about the performance, bringing people together so that you could begin to have some kind of discussion. It involved connecting with particular districts in this city with maybe six million people, of which perhaps 2.5 million weren’t even officially recognised.

My mother is historically from a Muslim family, although she wasn’t Muslim herself. She never took it seriously

AM: We’ll come back to some of those issues in a minute. You mentioned your prior work as a professor of psychology and you also mentioned the political work you were involved in with various strands of Islamic activism. What were the dominant strands of Islamic activism then, and how did those relate to other political forms of activism that were current in Sudan then? You mentioned the Communist Party for instance, and you referred to yourself as an America Muslim academic. I would like you to comment a bit more on that part of you. When did you become Muslim? And what did it mean for you?

AMS: What did it mean for me? This is a tricky one because ... my mother is historically from a Muslim family, although she wasn’t Muslim herself. She never took it seriously. When I was a kid the obligation was for us to be sent to my grandfather in Detroit, because we were living in Sierra Leone much of my childhood. My brother and I were sent to Detroit to be trained in din (the way of the faith). We always hated it because it was really boring, you couldn’t do anything; my grandfather was kind of a jerk. I didn’t take it seriously, but during a short term in prison—I was 18 at the time—I amplified that particular aspect of my heritage for personal protection. It was a pragmatic thing.

After prison I left the US for a while. It was when I was in Mali—I was 19 then—that I fully embraced Islam. In the mid-1970s I was asked by Da’wa Islamia, the Libyan version of Da’wa Islamia, who had connections with one of my cousins to help out on a project in Ghana involving Muslim residents of religiously mixed cities like Accra and Abidjan. Why is it that Muslim residents of these cities are marginalised in terms of their participation in the political game? Why is it that Muslims tend to be the least educated, the least involved in politics? This was my first real involvement in African urban issues, that is in terms of what would it take and how were people living, what were the levels of organisation.

Through that I started participating more and having to think more in terms of the kinds of forms of Islamic organisation that people were participating in. Although many of the turuq (Muslim sufi associations) were important kinds of references, important kinds of vehicles in terms of anti-colonial struggles, they didn’t seem to be as adept in terms of providing vehicles of organisation that would bring Muslims into a greater participation in political and social and more official economic life. I thought that this required more articulation with growing sense of Islamic movements, even though I had many disagreements with Jebha Islamia, but they were the ones who were willing to work in Africa. There is a very divisive competition for souls on the part of the Saudis, Kuwaitis and Iranians. They all were throwing in money, and it seemed as if Jebha, at least, were trying to avoid these kinds of compartmentalisations. I increasingly participated in this particular aspect of the Muslim Brothers. It is not necessarily the kind of formation as in Egypt, but in some sense an affiliate at an international level.

AM: So it was in Mali then that you self-consciously embraced Islam and you changed your name?

AM: Do you want to comment on that specific moment and on that act of name changing?

AMS: It was a difficult moment because I in many ways was really fucked at the time. I was without a passport and had faked papers. I had no really discernible means of support. I think there was something about Mali that attracted me. You know, the intense spirituality of Mali and Islamic traditions, that kind of eschatological aspect of it. For Malians Islam is not just a textual relationship; it occurs through all the senses, it’s open, it’s a way of living on many different levels. I was really powerfully affected by it.

For Malians Islam is not just a textual relationship; it occurs through all the senses, it’s open, it’s a way of living on many different levels. I was really powerfully affected by it

I assumed the name that my grandfather had given me, which at the time was not the name that I have now, because my grandfather belonged to this really weird Tarouk, Libyan Tarouk, and he was a very weird guy. AbdouMaliq was really a kind of pragmatic change on the original name, which was Maliqalim. The word Maliq has two meanings in Arabic. One is a very obscure verb which means “to become poor in”, which my grandfather intended as a sort of ironic comment, to become poor in the faith. For most Muslims Maliqalim means “the king of the faith,” which is a haram (forbidden) name. You were always in trouble trying to front this too much, so I didn’t want to necessarily give up the name that my grandfather gave me. I had to hide it, enclose it. Then, when I was dealing more and more in Islamic movements and in Sudan I had to change it. Once I changed I became much more public with it.

AM: You mentioned the term spirituality twice. After your lecture here in Johannesburg two days ago, my wife [Sarah Nuttall], who’s a very good reader of your texts, told me that listening to you speaking she heard the most spiritual lecture on the city she has ever heard.

Achille Mbembe (b.1957, Cameroon) is a philosopher, social scientist and essayist noted for his critical appraisal of postcolonial politics and subjectivity in post-independence Africa. His writing, which straddles popular and academic media, is noted for its broad interest in politics, music, art and football, and is underpinned by its ambition to animate and revivify thinking around metropolitan culture. Author of On the Postcolony (2001, English edition), he is a research professor in history and politics at the University of the Witwatersrand, Johannesburg and co-convenor of the Johannesburg Workshop in Theory and Criticism (JWTC). His new book Critique de la raison nègre is forthcoming.

AbdouMaliq Simone (b. 1952, Chicago) is an urban scholar, essayist and writer with an interest in examining and understanding the quotidian experiences of people in urban sites and locations often under-represented within traditional academic analysis. He has in the past undertaken research in Douala, Jakarta, Pikine (a suburb of Dakar), Jeddah and Winterveld (a residential district north of Pretoria). His output is characterised by its trans-disciplinary focus on a variety of thematic constellations, including urbanism, critical geography, sociologies of religion, social organizations, development processes, African politics and popular urban cultures. Currently professor of sociology at Goldsmiths College, University of London, he has authored and edited numerous books, including City Life from Jakarta to Dakar (2010), For the City Yet to Come (2004), Urban Africa: Changing Contours of Survival in the City (2005), which he co-edited with Abdelghani Abouhani.