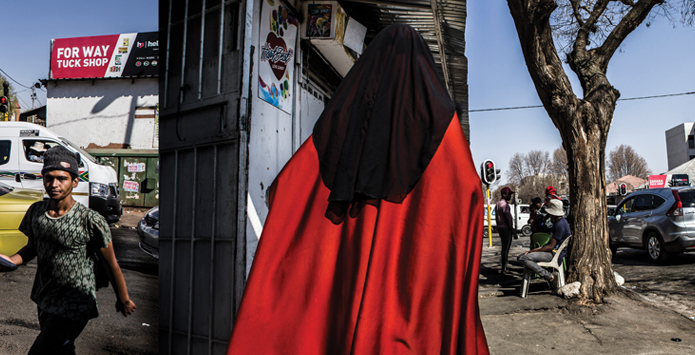 Joburg's Mayfair neighbourhood has transformed into the center of the Somali community as some in the city have become hostile to migrants from Africa.

There once four houses or maybe corner shops stood, I count more than 20 businesses. The tuckshops, takeaway joints, cellular repair, barber, and clothing shops mirror one another on either side of the road. Teeming with commerce, this mini agglomeration has enough variety to satisfy the needs of an entire neighbourhood. Hidden behind the enterprises, an unknown number of backrooms offer cheap accommodation.

The intersection is the core of an unexpected high street that has emerged along 8th Avenue in Mayfair, Johannesburg. And the frenetic energy of this formerly inconsequential quiet residential road is not confined to its borders: the retail strip has spread onto some side streets. Even parts of 9th Avenue join the retail cluster that is known as “8th Avenue Mayfair” now. Welcome to “Little Mogadishu”.

Located west of Johannesburg’s city centre, Mayfair has never lived up to its affluent London namesake. A suburban location near the gold diggings, Mayfair was historically home to working-class Afrikaners escaping crop failures and drought, Jews escaping persecution, and Gujarati and Hindu traders. It was always quieter than the adjacent and crowded Fordsburg area, where most of the city’s Indian migrants lived and traded. Distinct cultural and religious rites were observed by each group in synagogues, churches, mosques and cultural centres across the area. Most of the suburb’s residents lived in compact two-storey walk-ups, bungalows, row units, and semidetached houses that fronted tree-lined sidewalks. In 1950 the Group Areas Act declared Mayfair a whites-only suburb and all other residents were forcibly removed. From the late 1980s, many Indian households moved back to the area under a system that allowed them to appoint white South Africans to buy land and obtain trading licences on their behalf. Court battles to prevent their eviction followed. Now settled, many of the returned middle-class Indian families transformed the semidetached and single houses into signature double-storey mansions that accommodated extended families.

While standing at the corner of Bird Street and 8th Avenue, Abdirizak Ali Osman, general secretary of the Somali Community Association, gestures up and down the strip as he explains the making of this improbable high street. “We came to Mayfair because we were welcomed by the people, Islamic institutions and mosques here,” he says. “What made us come to 8th Avenue is the houses on both sides allowed us to turn these into businesses. [Also], other main roads are busier, but they have fast-flowing traffic. But on 8th, the many small businesses and guesthouses face each other, making the street busy. And the road is narrow, so traffic must move slowly. Even women and children can cross the road safely.”

Osman does not mention that the uneven paving, absent kerbs, potholes, and pools of stagnant water on the sidewalks and the roads also play a role; slowing the passage of pedestrians to a pace that enables lingering. The broken sidewalks are partly the result of small trucks parking illegally to load and unload the piles of washing powder, milk cartons, sweets, cosmetics and other products that are continually being dispatched from the wholesale businesses on the street, bound for townships around Johannesburg and beyond.

The sounds, smells, and signs of communal living distinguish Mayfair from other suburbs across Johannesburg. They clearly mark it as Islamic. It is an identity that Mayfair wears publicly.

The sound of lyrical Arabic nasheeds flows down the road from sidewalk boom boxes strategically positioned at the entrances of shops. On sale are varieties of coffee, perfume, spice, and expensive German cookware. The sounds vary. Sometimes it is music; other times, a stream of recitations from a local mosque—the Imam beckoning supplicants to consider what they would pay for an eye and how Allah grants them wonder without charge.

It immediately strikes you that the sidewalk coffee shops, where news, tips, political views and jokes circulate, are male-dominated. The Somali and Ethiopian restaurants are a cornerstone of symbiotic living in Mayfair. Osman earlier explained how single Somali men eat at the restaurants daily and how most have arrangements to pay their restaurant bills monthly. These restaurants are a kind of home away from home. Here, few eat alone. “Usually, you will share with others. Some people don’t have anything, but we call them to share our plate. When I didn’t have, people helped me too.” He had added, “Our restaurants are cheap, many of our black African brothers from Uganda, Malawi, and Tanzania also eat here.”

Tanya Zack is a Joburg-based writer and researcher

Mark Lewis is a photographer based in Johannesburg