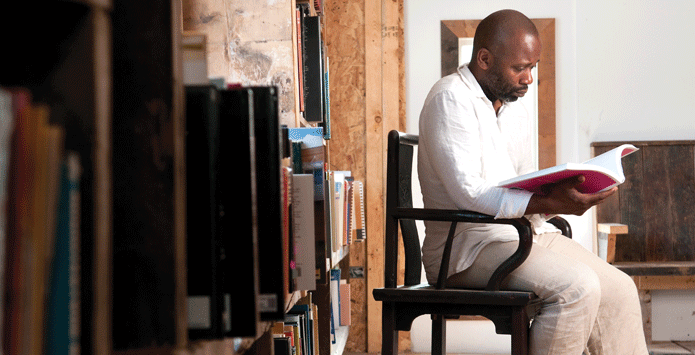 Theaster Gates is a Chicago-based artist with concurrent qualifications in urban planning, religious studies and ceramics. He talks to Clare Butcher about spending time in Cape Town and the acute point of transgression offered by his practice of place making.

I’m looking at my copy of French philosopher Gaston Bachelard’s The Poetics of Space, a 1950s publication that sought to apply phenomenology and lived experience to the study of architecture. It was given to me while I was living in Eindhoven, a small town in the south of the Netherlands left in the lurch by Philips Electronics when, over a decade ago, the corporation moved their headquarters and outsourced production. The unemployed working population were left to find work in the area’s agricultural sector or simply relocate. The square kilometres of city space once occupied by Philips factory floors lay dormant for years. This post-industrial setting was an appropriate backdrop for an encounter with both Bachelard, and the person who introduced me to him: Theaster Gates.

Gates, who was born and raised in Chicago’s west side, the youngest of nine children, has been described as an activist, an urban planner, an academic, a ceramist, a monk, a musician, a cook, a curator, a community organiser, a cultural entrepreneur, a performance artist and even a real estate agent. While he does hold postgraduate degrees in urban planning and ceramics, and another in religious studies from the University of Cape Town, none of the foregoing labels suffice. He is what you might call, a rounded character—part of a trajectory perhaps of historical figures who would have been labelled as “accomplished”. But it’s bigger than that. Anyone in Gates’s presence for long enough begins to get a sense of his encompassing approach to what he calls, the “poetics of production and systems of organising” in a more Bachelardian sense (though Gates would probably wince at such a pretentious phrase).

In the final chapter of Poetics, Bachelard speaks of roundness as a phenomenon or organising metaphor in architecture, whereby through the act of placing something in a particular environment, one creates a point of reference, a “guiding form” which governs the nexus of relationships around it. Viewed from this height, the sizable work of Theaster Gates may be seen as carefully administered as well as catalytic.

It has been several years since we met in that factory town where Gates and the Black Monks of the Mississippi—the motley band of musicians he writes for, directs and performs with—developed a piece together with local practitioners as part of the Van Abbemuseum’s Heartland project. Since then, Gates has bought a house, and then another, and then another, as part of his ongoing Dorchester Projects (2009-) in Chicago’s rougher Grand Crossing neighbourhood, where he has been gutting and repurposing whole buildings in which to host dinners, house music archives, run university courses in urban studies, and generally raise a ruckus. Gates’s work as an artist can only be seen within the context of his broader involvement in these “neighbourhood” or “urban” projects. But that word—neighbourhood—includes a much larger physical terrain than that of the mixed migrant community on Chicago’s south side, as well as a much more complex disciplinary field than one might assume. From early on, Gates has been mingling his role as a member of the academic community at the University of Chicago (where he has just become the first director of Arts and Public Life) with his lived experiences of people, places and practices.

During a series of email exchanges, I asked Gates how he would describe his own trajectory. “While there is a disciplinary intersection that happened early in my college days between religion, sculpture and constructs of the city, I am not sure if those things naturally equate into the practice that I have today, but they are definitely part of the mix,” he offered. “The other parts seem to do with what you don’t learn in school. Ideas about where motivation and drive come from; how to hustle to make interesting things happen … what to do when the thing you want most is not available to you. The practice seems based as much in the things that are not available as it is the projects that happen in between.”

Clare Butcher is a curator and art educator based in Amsterdam