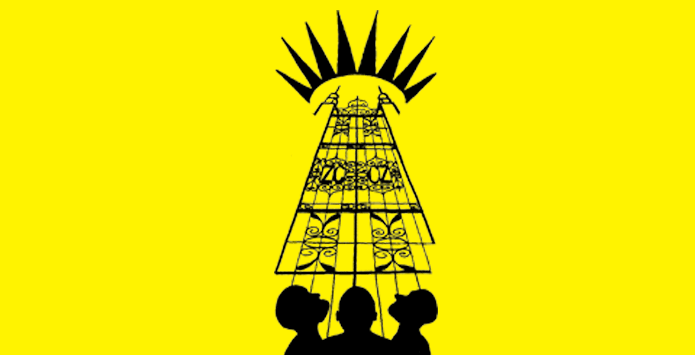 An up-close view of a new Chinese-built special economic zone in Zambia’s copper belt region, the first such initiative on African soil

At noon on Saturday, in this single-storey complex in the heart of Copperbelt Province, in central Zambia, every office is occupied. The doors are left ajar, allowing us a rare view of the executive managers—all male, all Chinese nationals—at work before their LCD screens. The theme of the office interiors is explicitly minimalist: a desk situated in the first third of each generous room, then vacant uncarpeted space, and a solitary couch in the final third. There is no noise save for the clack of keyboards and the hum of air-conditioners. Hanging off a white wall in a secondary corridor, framed and glassed, is a photograph of Chinese president Hu Jintao handing a chunk of ore to his Zambian counterpart, former president Levy Mwanawasa. The image is the most outspoken symbol of the complex’s purpose.

Outside, a sculpture underlines that purpose: two enormous hands, one Chinese, the other Zambian, reaching for the midday sun. The flags that surround the sculpture bear the logo of the Chambishi Copper Smelter, an initiative commissioned by Mwanawasa’s replacement, President Rupiah Banda, in October 2009. Significantly, the smelter’s opening came one year after the onset of the global recession, which saw Western investors either fleeing or scaling back on operations in the copper belt. As Africa’s largest producer, copper is responsible for 70% of Zambia’s foreign exchange earnings—against 2008, these earnings had tumbled in 12 months by almost 20%, and they might have tumbled further had Chinese investors not stepped in to acquire the abandoned assets.

So the managers in the smelter’s head office are working, as our impromptu tour passes by in July 2011, to extend the plant’s capacity. The existing $300-million smelter, which produces 150,000 tons of copper blisters per annum, is not enough to service a demand renewed by China’s interests; by the end of the second phase, due for completion in 2012, capacity will be up to 250,000 tons. The additional investment of $220-million will create 200 extra jobs, bolstering the workforce of 970 currently employed here.

We have been given access to these figures, as well as to the interior of the headquarters, thanks to a member of the Zambian Development Agency, who advised us—over drinks in a bustling Lusaka mall—that we would learn more in the guise of “business consultants” than as journalists. It is not a ruse with which we—writer Richard Poplak and I—are comfortable, but we know, from travelling thousands of kilometres across the continent in search of material for our forthcoming book, that Chinese companies in Africa uniformly view the media with suspicion. Our Zambian contact, who oversees the smelter project from a local standpoint and professes a belief in “transparency”, has in effect stamped an official seal on the ploy.

“Here is the greatest gate of Zambia,” says our young female guide, Jiani Cai, a few days after the Lusaka meeting. “It shows China’s confidence.” Cai, a development planning graduate from Shanghai, is not talking about the gate to the smelter, which looms in the distance 15-storeys above the flat landscape, but the gate to the Zambia-China Economic and Trade Cooperation Zone (ZCCZ), of which Chambishi Copper Smelter Limited is only a part. And it’s a gate that indeed impresses—stretching in a semi-circle across two wide boulevards, its polished stone and brushed steel surfaces subtly reflect the light, inviting passers-by on the Kitwe-Chingola road to look and look again.

We hop into a minibus with Cai, and are told of the special economic zone’s history and successes. Covering around 41-square kilometres of prime copper belt real estate, it is the first initiative of its kind to be established by the Chinese government on African soil—Hu Jintao and Levy Mwanawasa opened the zone in February 2007. As of 2011, 14 companies have taken up residence, accounting for an accumulated investment of over $820-million, including investment in infrastructure—roads, water supply, a power station—of more than $103-million.

What benefits, we ask Cai, accrue to companies that invest in the ZCCS? Her list is long: residential facilities for expatriate staff; assistance with company registration; the provision of expertise regarding factory and warehouse construction; facilitation of dialogues with Zambian governmental agencies; assistance with applications for the relevant tax breaks… It’s this last part, of course, that serves as the real incentive—specifically the clause that states that any investor in the ZCCS will pay a “zero percent” tax rate on profits for the first five years of reporting positive returns. The tax incentives extend further, into a “zero percent” import duty on raw materials and heavy machinery, and the deferment of value added tax on equipment imported for use in construction. Which makes us wonder why the zone, outside of the Chambishi Copper Smelter, appears so empty and devoid of life.

Cai is not forthcoming, and speaks only of the “exciting” plans. ZCCS, it seems, aims to sign 40 investors by 2015, across industries extending into textiles and household appliances, adding up to a projected accumulated investment of $15-billion. Given that five years on the bulk of the current $820-million lies with the smelter, it’s got to be a tall order. Fact is, tax breaks aside, this is an isolated corner of the planet in which to base a company. And the Zambian copper belt, whether populated by the West’s mining houses or by China’s, may be no more—and no less—than the name implies.

Kevin Bloom and co-writer Richard Poplak are working on an investigative travelogue entitled Whiteout: The Chinese Advance and the Twilight of the European in Africa, due for release in early 2013.