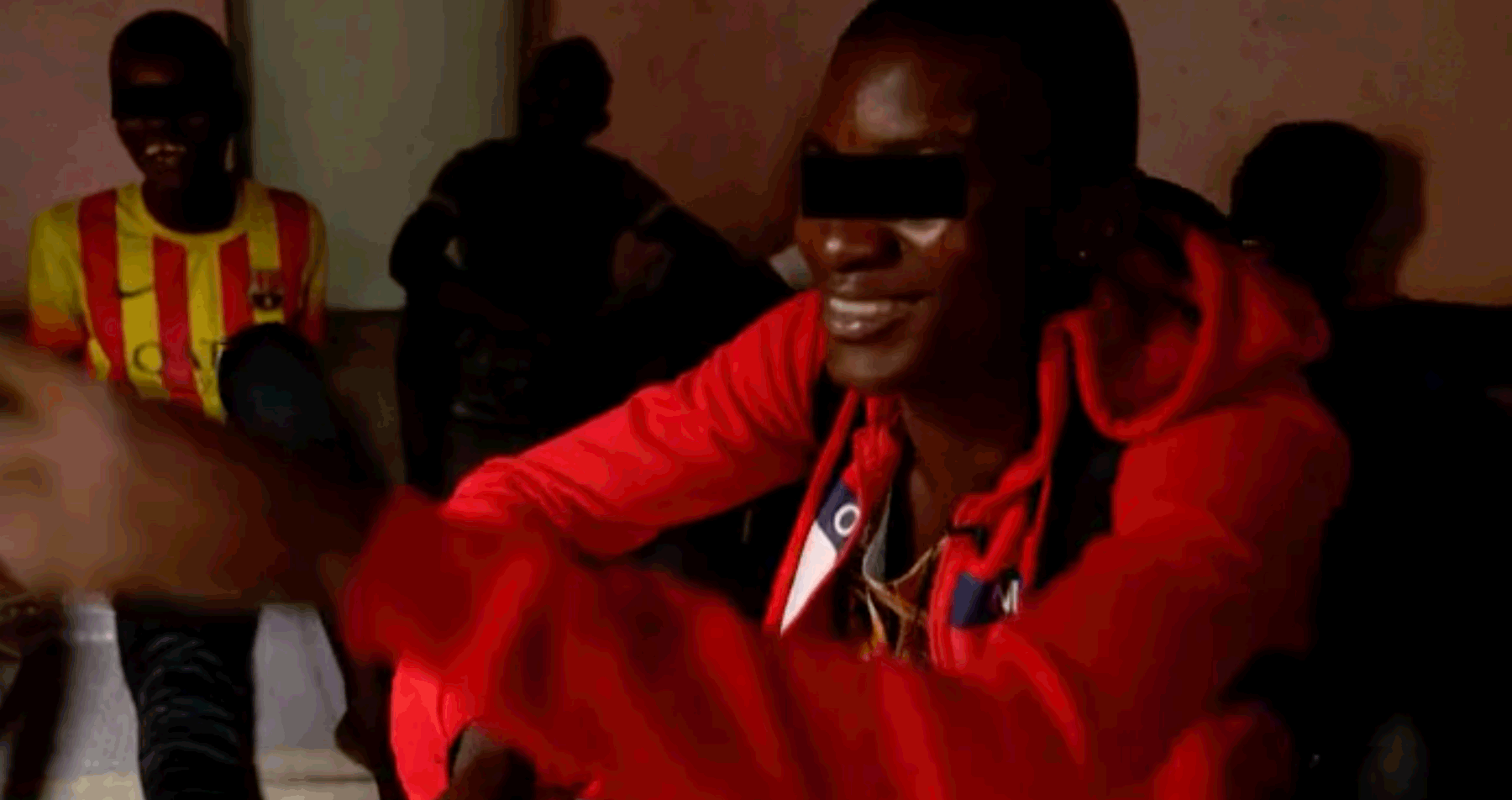 In the Matete district of Kinshasa, among the dilapidated sheds of an abandoned market, a gang of youths loosely affiliated with the Bloods gang in the United States have established an encampment they named Area 51. I had been frequenting a bar-nightclub across the road from where I shared a house in Lingwala. One of my housemates was sleeping with the bartender, and we could drink for free. The repetitiveness of these excursions grew boring. I complained to one of my collaborators, also a Blood, who suggested that since I was in the vicinity nearly every night, I should chat with gang members—he described them as “aliens” from outer space.

My first encounter was tinged with suspicion, arrogance and silliness. The four youths—“52”, “53”, “67” and “55”, as they insisted on being addressed—shunned the flamboyant attire usually worn by the Congolese sapeur, an urban dandy who aims to dress with unparalleled singularity, in favour of conservative Brooks Brothers business suits. During the initial encounters, they demonstrated their encyclopaedic knowledge of every detail associated with Area 51 in Nevada, and its militarized seclusion in response to purported alien invasions. They showed me videos on their cellphones, as well as top-secret documentation. They claimed that the abandoned Kinshasa market had been vacated following an alien landing; the aliens had purportedly arrived to clear out Rwandan invaders during the early days of Joseph Kabila’s regime.

They youths knew much less about these local events than they did about the folklore of American West, at times even disputing the reality of Area 51, which they claimed was granted to them as a concession by the Congolese state to contain any fallout in the area. After weeks of conversations, it turned out that Kinshasa’s very own Area 51 was simply a ruse; they possessed no belief in aliens or their invasions at all. So much for the speculation that the marginalised in their wrecked neighbourhoods do everything possible to actualise imaginary new worlds, or that their dreams are of new worlds.

But why this elaborate dissembling by this gang of youths? Why this significant commitment of time when they were barely scraping by doing a bit of dealing and thievery on the side? All my early conversations took place outdoors, at the border of the large shed deemed the space command centre. When they finally—or temporarily—let down their guard, their actual mission was revealed. They were preparing for the arrival of 51 justices from all over the world, drawn from what “55”—in an obvious reading of Frantz Fanon—deemed “the wretched of the earth.” These justices, he explained, would deliberate on the state of Congo, and issue a judgment on whether it was worth saving or not.

I asked “55” what would transpire in the event that the justices rule against Congo. Residents would be required to exit the capital, cross the river into the Republic of Congo in thousands of dugouts provided by the United Nations, camp out in Brazzaville for 51 days, again at the direction of the United Nations High Commissioner for Refugees, and then return to their homes and livelihoods in Kinshasa. But they would have no memory of the time before as all the “cognitive infrastructures” and memory banks of the city would have been wiped out, explained “55”. If the court ruled in favour of the Congolese, well, each household would contribute a small sum to defer the travel costs of the justices.

I asked about the precise time of the convocation. “52” pointed out that some of the justices, because of their limited income had commenced their journeys years ago, and were working their way across significant distances in order to eventually show up. I asked if all 51 justices were required to appear in order for a judgment to be issued. What would happen if some did not make it? Again a quick answer was forthcoming. The youths had been studying international law and would be prepared to step in if it appeared that one of the designated justices was unavailable.

For them, the ruse of aliens was necessary given the political gravity of the project. They had no choice but to hide behind the madness attributed to them by neighbours and local authorities. As long as their work dealt with aliens, rather than the very survival of the people, they had some room to manoeuvre. With some reluctance, but also pride, they showed me the courtroom and its antechambers. It was about the size of half a football field. While poorly furnished, the space was filled with photographs, books, talisman, ornamental objects, government documents, personal notebooks; there were also hundreds of diaries, invoices, advertisements and hand-outs. The flotsam, some of it immaculately tended to, was displayed and stacked and strewn about the space. It represented a veritable archive of Kinois everyday life.

Here in the courtroom, amidst what “67” deemed “evidence”, were the materials of this world: a disorder awaiting judgement and order. What would the judges, the bulk of who probably were unable to read French or Lingala, make of it? How were these materials to be intuited? Could they be read against any and all grains? These were familiar questions to the makers of the courtroom. The contents of the courtroom were constantly being rearranged “55” told me. They were never quite satisfied with the presentation, and agitatedly grappled with how things might be displayed, thus anticipating the scope of the labours and activities of the 51 justices.

The dilapidated shed in Matete occupied by a gang of Kinshasa youths is a courtroom as well as a laboratory. Inside abandoned market decisions of all kinds are awaited, decisions based on evidence, although of what kind remains unclear. Regardless of which way the decision goes, no one will be going anywhere. They will not have to live with the residues of guilt or regret. They will be judged but all will live on, with no memory of what was the basis of judgment, only a different orientation to this world, a world that has not changed, yet in some respects has changed everything.

Image credit
A still from an RTA documentary on gangs in the DRC
https://rtd.rt.com/films/mache...