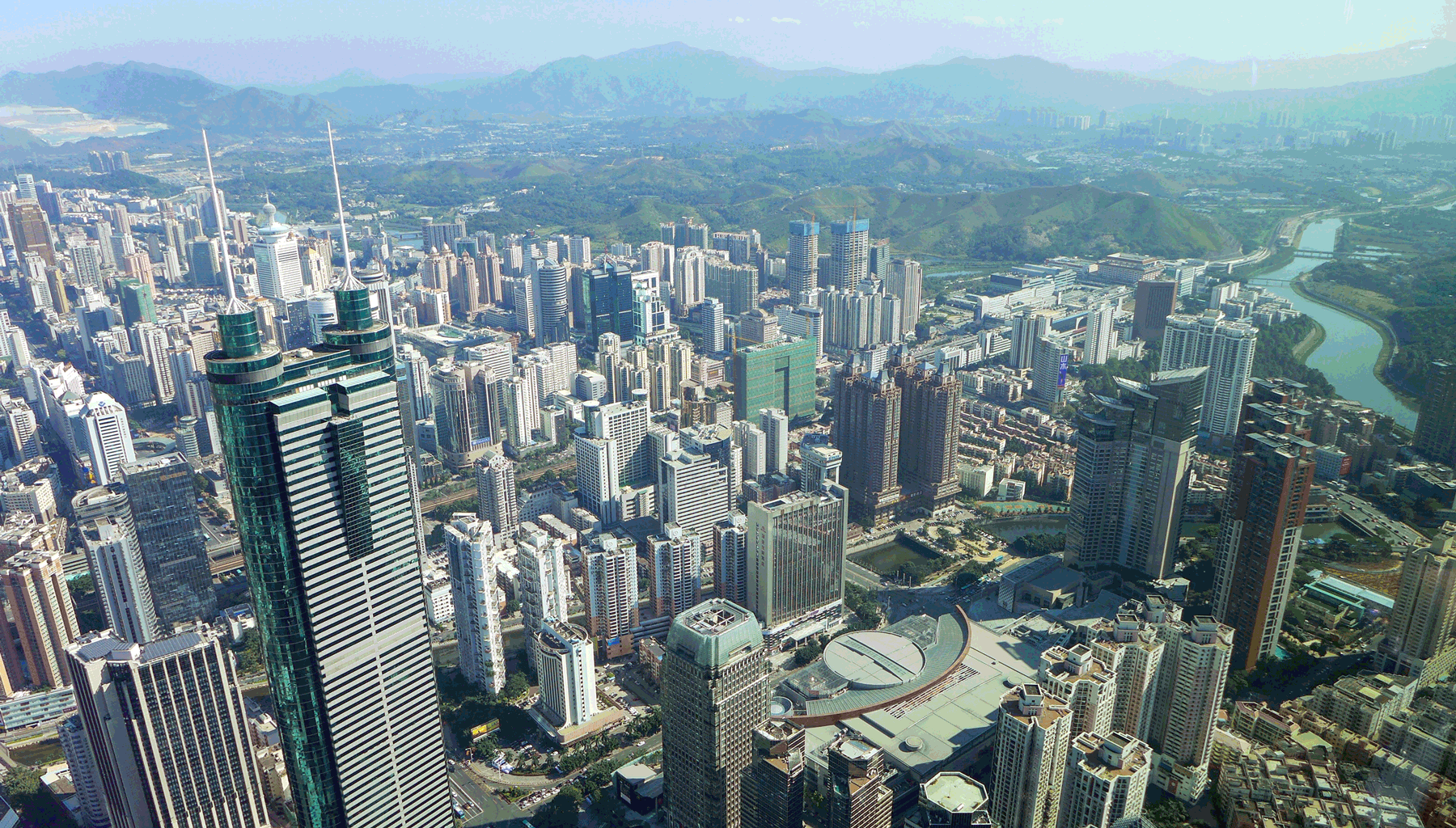 Shenzhen has moved across various phases of its progression from a space of exception, a special economic zone doubly delineated through specific forms of bordering and porosity in its relationship to Hong Kong and the rest of the PRC, to its current status as perhaps the world’s foremost global city. This is a city that seeks to experimentally extend Chinese territory itself into various hybrid formations—from the creation of special zones that rearrange the relationship between international finance and domestic borrowing to the coordination of financial transactions in offshore special economic zones, such as the port of Gwadar in Pakistan. Throughout these transitions, the major actor of urban development has been Chinese state-owned enterprises (SOEs), which have been essentially autonomous agencies created by various tiers of the state in order to manage the development of land and economy within specific territories initially allocated by central and provincial governments.

From the outset these SOEs had varied compositions and capacities, along with different orientations for income generation and dispositions of their holdings. Their enduring power is derived from access to free land. Initially they were attached mainly to national ministries, and to a lesser extent local, district and provincial governments, with the latter scenario often entailing joint ventures amongst them. Their initial role was to rapidly develop an industrial base for exports and to fold in foreign investment and inputs for this purpose. Having to start from scratch inevitably meant that manufacturing was at a modest scale, focused on electronics, furniture, tools, foodstuffs and garments.

Manufacturing was highly dependent upon low-wage labour. Few SOEs actually managed the manufacturing processes, instead, they installed basic infrastructure and built environments, dividing up land into parcels and estates that then would be sold, and then managing the service costs of overall district operations. As SOEs were initially mandated to secure the welfare of their workforces regardless of profitability, most SOEs sought to detach themselves from their ministerial and government affiliations, reduce the number of their employees, and reconsolidate themselves into particular specialisations and reorganised entities that reduced competition and secured greater control over particular territories.

SOEs were largely privatised in the early 2000s, albeit with continued significant government involvement as shareholders. In the gradual elaboration of a Statutory Master Plan, the metropolitan government officially curtailed the autonomy of their planning functions. This was a move that sought to institutionalise their operations within the strict ambit of industrial facilitation, even as the bulk of large industrial development was being relocated to the periphery of an expanding metropolitan area and where the locus of profitability largely was situated in commercial and real estate development.

Notwithstanding their curtailed jurisdiction, SOE’s have largely been free to ‘illegally’ develop land, acquired for no cost, for uses that they themselves determine even if formally subject to strict planning regulations that would penalise them for any deviations. With 100% profit retention, subsidies and low-interest loans guaranteed by the government, and extensive and deep political connections, SOEs were able to wield significant power that enabled them largely to specialise in real-estate development, even though they rarely had official standing in this area.

If Shenzhen is a locus for on-going experimentation, as it continually purports itself to be, a great deal of the experimentation went wrong. More specifically, it generated a series of recalibrations and compensations that rendered structured planning difficult. Instead, it ushered in a system of plotting evident in many southern cities, where planning takes place without a plan. Here, many different futures, logics and ways doing things sit next to each other as an impetus for adjustment, for the incitement of ways in which the interstices among divergences become a multifaceted tissue of articulation.

The immanence of failure has always haunted Shenzhen. It could be failure in the face of weighty government impositions, reduced profitability due to investment in industrial developments forced to the periphery, internal management problems within specific SOEs, redirection of primary axes of development, environmental problems or locational disadvantages. In such situations, property allocation, use and ownership became highly fragmented. Land use was managed by a wide assortment of actors, from SOEs, their affiliates—such as management companies, distributors, investment vehicles—factory owners, SOE employees, commercial tenants and government departments. In a municipal governance framework that officially required broad consensus among property owners and land users in order for district level renewal plans to take effect, the sheer diversity of actors meant that such consensus was rarely attained, or often even attempted as actors largely saw such processes as against their interests.

After all, they presided over districts that were usually anchored by a predominant economic specialty, such as electronics or fashion, and all of the economic activities that went with it—ancillary supply, transport and service firms, housing for workers and so on. These were areas full of small factories, workshops, storerooms, warehouses, commercial showrooms, retail and wholesale outlets, hotels, restaurants, wet markets, supermarkets, hawker centres, street sellers, transport hubs, logistic centres, parking lots—all operating at different scales, with different networks across the city, yet still operating in concert. Almost all activities and their built environments were not zoned for the uses that they actualised on a daily basis. All activities and their built environments were subject to incremental adjustments that were not registered, yet also proved capable of absorbing the trappings and gestures of governmental intervention that often had to satisfy itself with renovations to the façade of things, and little else. These were the accomplishments of failure.

The government has been able to demonstrate its heavy-handedness through buying out local district authority structures, or demolishing new developments emanating from districts that demonstrate excessive organisational capacity or volume, or entice village districts with lucrative land-sharing arrangements. But in general, it has proved unable to come to grips with the economic realities and productiveness of an urban majority. Heterogeneous and affordable districts endure, at least for now. The terms of their endurance were not specified in advance, nor were they the objects of any explicit aspiration. No one set out to create them as they are. They are the by-products of largely failed experiments that generated compensations that required the redistribution of the implications of that failure away from those in positions of authority to whom that failure would exert debilitating costs. So the distribution of failure produced a scenario where the contiguities of land use and ownership did not make obvious sense.

Sensibility, rather, had to be constructed through a series of manoeuvres that would enable discrepant ways of doing things to endure in close proximity to each other. Actors had to at least implicitly accommodate their divergent aspirations, claims and rights. They had to venture initially tentative, provisional gestures of articulation without everyone being encumbered to act as an institutionalised “we” whose assent would be elicited and solidified through protracted negotiations with the government. But rather, whose effects on the ground, demonstrated through both spatial entanglements and stark disjuncture, had to be continuously worked out, and in the process, became available to a wide range of users and residents.