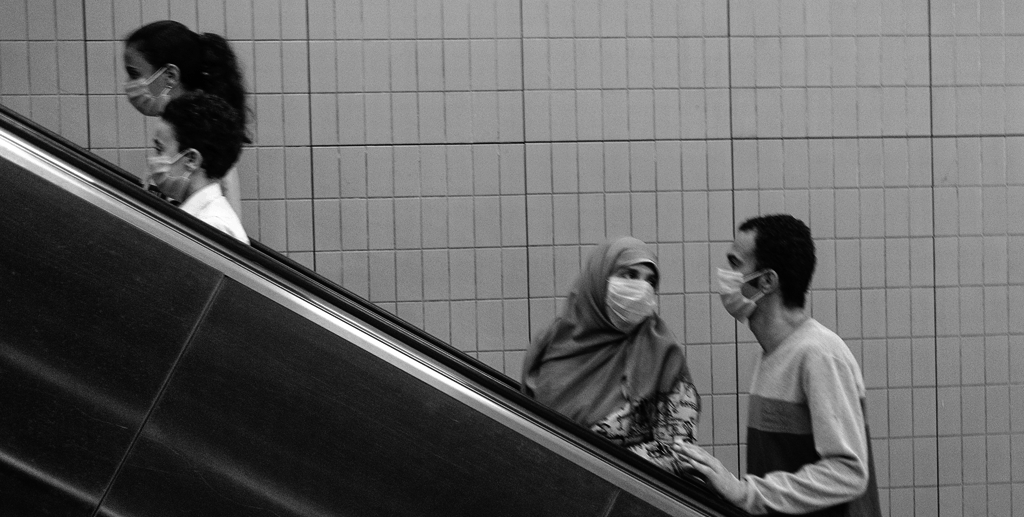 In 2020, in the wake of the pandemic, queuing has returned to the foreground of urban life. To reduce transmission of Covid-19 by minimising time spent in indoor spaces with unknown others, in many cities new regulations control the numbers of people who can enter shops, offices or other spaces. In London, as elsewhere, instead of entering buildings and following the usual protocols inside, customers must now wait outside—in orderly or disorderly fashion—for their turn.

The queue is an ephemeral form, yet a ubiquitous experience of daily life. Generated by provisional collective behaviour, no one claims to like queuing, and yet the alternative—a disorganised press of bodies—is generally deemed to be worse. Covid-queuing is a recent iteration in a wide historical landscape of queues. While queues in Britain may have their own character, as social and cultural historian Joe Moran has shown, scholarship from all over the world has observed how, whether at election polling stations or immigration controls, at pharmacies, for public transport or at tourist sites, cultures of queuing can generate particular temporalities, politics, techniques and comportments.

Queuing is also a form of discipline, particularly when it is associated with legal or bureaucratic waiting. Being transferred from one line to another in a regime of documents, checks and referrals, queuing can be an embodied manifestation of state regulation. It can also feel humiliating, even degrading. In Britain, the slow violence of austerity politics has been compounded by the upheavals of coronavirus, creating a cost of living crisis as more and more people lose jobs and housing, or find themselves in debt. Food insecurity in particular has skyrocketed and queues for food banks around the UK have got longer and longer.

This normalisation of queuing for food charity is a scandal in the fifth wealthiest country in the world. But what happens in the queue? As queuing of all sorts becomes a reality of day-to-day life in the UK, and elsewhere around the world, and we search for ways to build solidarity and care at a literal arm’s length, is it possible to see queuing as a new kind of popular collectivity?

Community Kitchen is a food project and homelessness drop-in centre in North London. Aware of the dehumanising experience of bureaucratic waiting, it was set up to bring people together over food, on the basis that eating and socialising together can be a way to build community solidarity. It was, in a sense, anti-queue: many guests would come partly as respite from waiting at the Job Centre, at the night shelter, or in offices as they took necessary documents from one council service to another. Since March 2020, this has no longer been possible. Guests are no longer able to enter the community centre but must queue outside whatever the weather for a takeaway meal. What was a project intended to bring people together was now being asked to keep them apart.

To start with, people would—impatiently or resignedly—queue in silence, but as the months have gone by, the queue has taken on a life of its own. Slowly some started to bring their children, others to play music from their phones. In the summer, someone brought chalks for the children to draw on the pavement, then later on, the project provided some chairs as well as drinks and snacks. Queuing up next to unknown others, new conversations begin. Information is shared: the upheaval of the pandemic has drastically altered the landscape of food and shelter and people are rebuilding their mental maps of where to access hot meals or a safe place to sleep. Guests swap stories and news, and the queue can be convivial, even fun. Community Kitchen volunteers also now use the queue as space to provide advocacy support and other assistance.

Here at least, the queue is no longer a time of passive waiting. An example of what social anthropologist Madeleine Reeves in a 2019 essay on queues has called “occupying the queue”, the waiting has started to enable other things to happen. The queue has become a space of encounter and a form of social practice. Elsewhere in London, there are small indications that the queue may be starting to take back streets for popular use. On some high streets, barriers have been used to reclaim part of the road, extending pavements for pedestrians. The official logic for this is to aid social distancing, but in practice, it is also enabling a more social form of queuing.

In her novel The Queue (2013), Egyptian author Basma Abdel Aziz imagines a dystopian city with a centralised authority known as The Gate. Citizens are required to obtain permission from The Gate for even basic affairs, but The Gate never opens and the citizens wait in vain. In consequence, people live their lives in a queue. Abdel Aziz explores how, though it initially seems to indicate compliance to the obscure authority, gradually the queue becomes social, intimate and caring. New collectivities and popular economies blossom: people look out for each other, share mobile phones, food and information. Slowly, the queue becomes the site for new forms of political sensibility and action to emerge.

There is no doubt that standing in line is frustrating and exhausting, a place where bureaucracy is felt in the body. In this pandemic, the queue has become further framed as a Covid-secure practice, a socially-distanced behaviour for minimising coronavirus transmission. But perhaps there’s also a chance to see the queue as a way to stay critical as well as safe. While the queue might not yet be a space of radical action in the way imagined by Abdel Aziz, standing in line need not prevent us from developing a solidarity of care. This is even more important when cold and rain make convivial queuing harder to practice. But perhaps this is what the new pandemic politics looks like: we might not be able to stand shoulder to shoulder, but we can still stand behind each other.