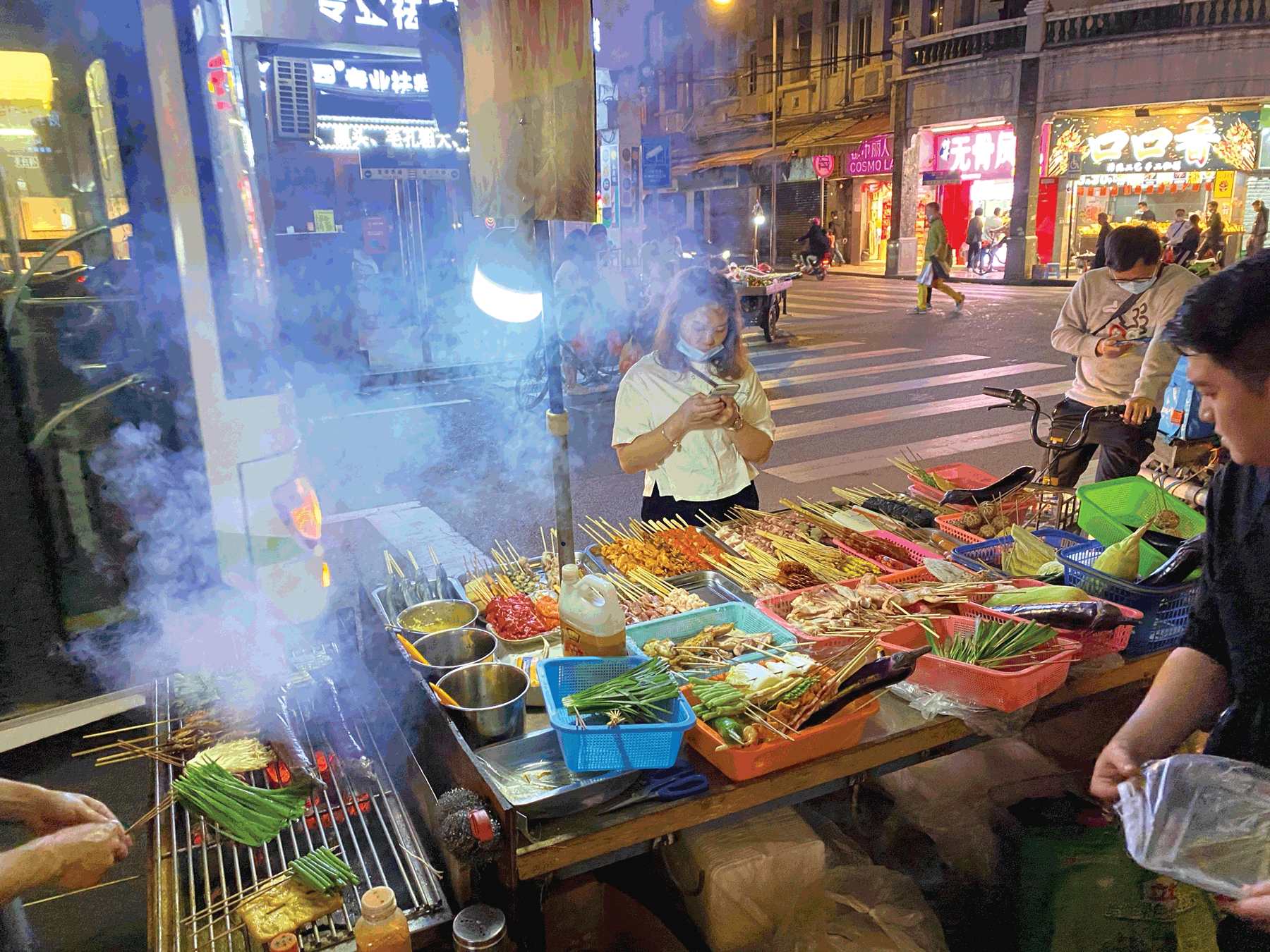 A kebab stand on the streets of Old Town in Guangzhou. Photo by Zhuofei Tang

Flâneuring through Guangzhou reveals a city coming to terms with a “new normal” that’s filled with unexpected treasures...and food

In July 2020, I decided to move to Guangzhou, a sprawling city of about 15 million, in China’s Pearl River Delta metropolitan area. It was a quick decision. For years, I lived between my hometown—Shenzhen—and Chicago, but as the pandemic wore on, making travel difficult, I decided to settle.

I’m a bit of Flânuer. Nothing gives me more pleasure than casually meandering through a city, taking in the sites, and watching life and people go by. I had visited Guangzhou in January 2020, right before Covid-19 hit, and after a week exploring the city, I was infatuated. An ancient city that manages to hold harmony between its eastern and western influences, Guangzhou’s beauty is best described as eclectic. Unlike that other famously cosmopolitan Chinese city, Shanghai, Guangzhou exudes an earthiness that makes it a relaxed place to live. Guangzhou also is a town for eaters. The Cantonese food is the best you will get anywhere. It is the home of Dim Sum. Food defines life here.

The Pearl New Town area is the most modern part of town. If you want a completely different vibe, you can hop on the metro. Within ten minutes, you will find yourself surrounded by late 19th century brick-and porcelain clad houses built by overseas merchants who once traded here. Ten minutes more, and you are in Old Town, amongst Cantonese-style homes from the 18th century, in an area filled with pedestrian-only commercial streets. Here, street vendors rule. There is nothing I enjoy more in my perambulations than diving straight into Old Town’s tight, blue-stone paved streets, with their many twists and turns. I often stick my nose into some of the nameless, hole-in-the-wall food stalls, some of which have been serving delicious Cantonese food for dozens, even hundreds, of years.

The Covid-19 regulations announced in early 2020 had a detrimental effect on the city’s vibrant street life, which revolves around eateries and food markets. It could have been worse. Unlike other parts of the country, Guangzhou was never listed as a “high risk” region. While there was hardship during that initial lockdown, eateries remained alive thanks to a proliferation of food-delivery apps that kept them connected to their hungry customers.

Food delivery services were already becoming a big business in China before lockdown, but the pandemic definitely promulgated the app-based ones. According to a recent report in The Economist, it’s now a $46 billion industry. Last summer, about 20,000 food orders were fulfilled by gig workers—freelance delivery guys—every minute across the country. So it was that during the first few months of the pandemic, when self-isolation/ self-quarantine was suggested, eateries and small grocery stores survived thanks to these services.

Luckily Covid-19 was contained relatively quickly across the country. With strict measures in place, infection spikes were kept in check, which enabled a return to something like normallcy. With that return, eateries and markets swiftly resuscitated, only now they were packed with masked customers.

Being back outside at markets and eateries, but also being masked, has been surreal. Besides the mask, the other constant reminder that we still live under a global health crisis is that we all got assigned a “health code”. A programme linked to the ubiquitous messaging service, WeChat, this ever-present contact tracing app tracks our every move, recording any exposure to a confirmed case of Covid-19. If you have been to a high-risk zone, your risk rating is updated accordingly. This unique health code has become a part of everyday life, and must be shown to an official before entering any large gathering areas like shopping malls, cinemas, neighbourhoods, restaurants and museums, along with a temperature scan.

I was feeling quite uneasy about all this at first. In some way, it felt very Orwellian. But, thinking through it, relinquishing my personal privacy for a “communal good” is probably the most efficient way to manage a crisis of this magnitude in such a densely populated country. I have accepted that we all have to live under the surveillance that has been enforced on us. It will probably remain in place way after the pandemic is gone. It is the world we live in: identities are blurred into data, individual privacy relents for communal good, “read and agree” makes you agree to more than you realize, congruency becomes righteousness.

Meanwhile, I have mastered calling up my health code within five secs, and my flânuering continues. I’ve taken to roaming at night, a serendipitous time for food journeys. Late nights are also when city surveillance loosens up a bit, freeing streets occupied by traffic during the day to transform into open-air food markets filled with unlicensed street vendors who no longer have to negotiate with heavy vehicular traffic.

The late-night vendors are the protagonists of the streets. Expertly swinging their woks and creating all sorts of delicious dishes, they transform the atmosphere, and the glamour of Old Town starts to shine again. It’s in the trees, it slides down along the street lamps, bouncing between the tarnished bricks, and swirls with the lingering smoke.

In these moments, Guangzhou charms me all over again.