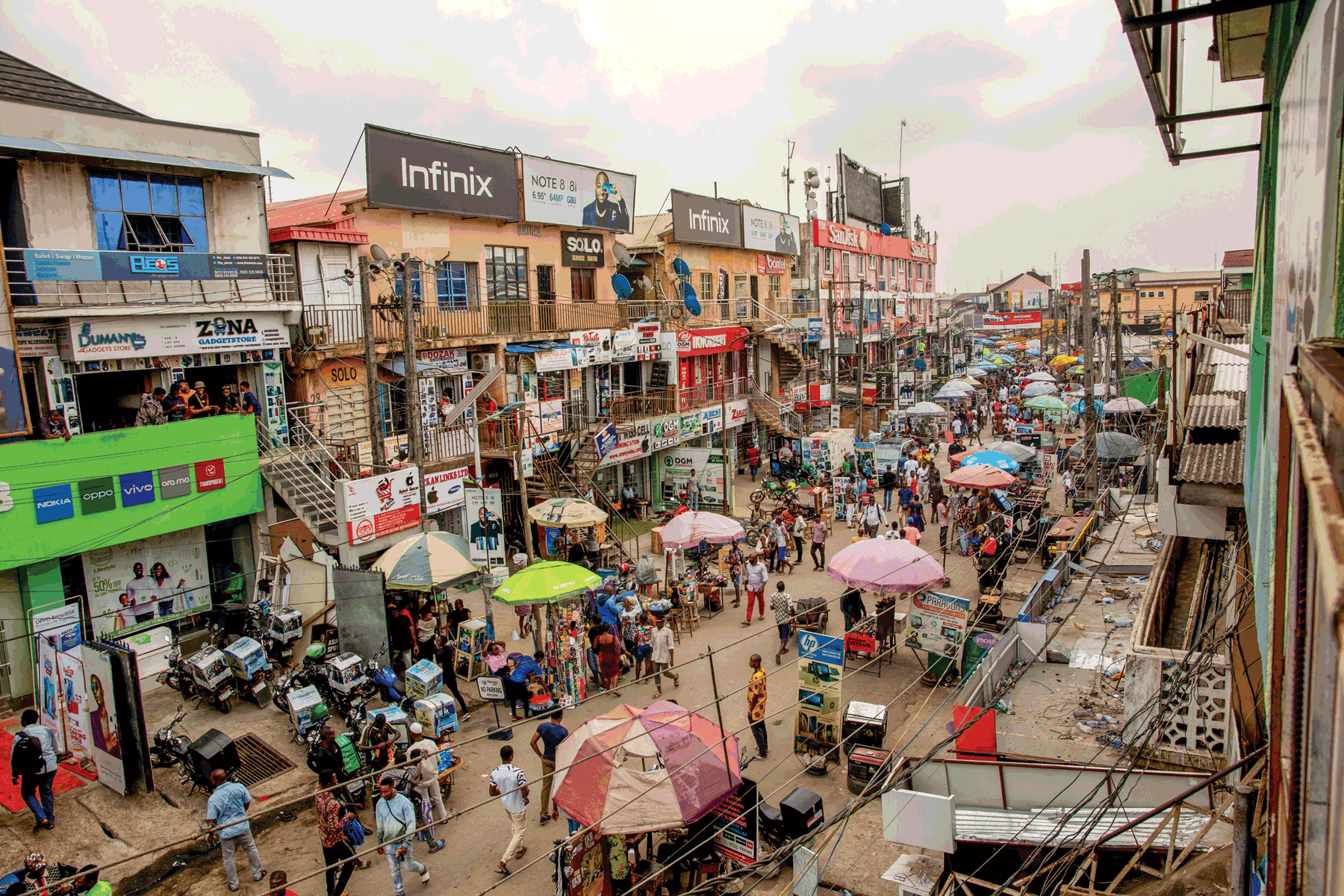 Crowds of shoppers walk through the Ikeja computer village market in Lagos, far from hip neighbourhoods like Yaba and Lekki, where the city’s fintech startups are experiencing a boom. Photo by Adetona Omokanye/Bloomberg via Getty Images

There is something about Lagos that “opens all the senses”. That’s how a Ghanaian friend who travels to the city for a yearly dose of its “madness” describes it. Your every sense, every faculty, must be alert, whether driving or walking its streets—silky-smooth or potholed, depending what side of town you are on. One wrong turn could land you in trouble—smack in the middle of the city’s notorious ‘go-slow’ traffic jams, or worse, in a den of prowling fraudsters.

If you’ve been to New Delhi or seen Bollywood movies, you can perhaps picture Lagos. It’s a network of mostly crowded streets, where rickety danfos (the popular yellow mini-buses), headlights missing, wobble precariously close to throngs of clip-clapping pedestrians. Lagosians move like there’s a prize for who can walk or drive the fastest. Day and night, the sounds of Lagos boom: angry honks; loud cursing from agberos (street thugs); desperate calls of street hawkers.

The sounds rise and swirl among the towering office buildings in popular districts like Eko or Yaba. I imagine that a bird’s eye view would not be too different from how an ant colony looks to us: a hive of never-ending hustle. But zooming in to peer inside those grey and white buildings, packed tightly like sardines, an internal change is afoot. Offices that once housed white-collar businesses like banks and oil companies have recently become home to many of Africa’s most prominent and valuable startups.

Since the 2002 birth of payment processing company, Interswitch, at least 200 startups have popped up in different corners of Lagos. Some of the most popular—Flutterwave, Andela and Paystack—are worth almost $2 billion combined. Most are in the hip Yaba neighbourhood, dubbed ‘Yabacon Valley’ and also home to the University of Lagos. Others have located themselves in the affluent Lekki neighbourhood, which resides in the low-lying peninsula along the Atlantic, where million-dollar homes cower at the mercy of floods during the rainy season.

Lagos is now Africa’s most valuable tech hub, valued in 2017 at $2 billion, ahead of Johannesburg’s $1.3 billion valuation. Investors from North America, Europe and China have all shown interest. 2019 was a big year for Nigeria’s fintech sector, which raked-in over $600 million in investment.

But this reputation is starting to unravel.

Lagos is a melting pot not only of Nigeria’s cultures and virtues, but also the place where its vices and dysfunction are most visible. The pressure of 20 million people squeezed onto 1,171 square kilometres are evident everywhere. Gutters overflowing in the rainy season speak to an overburdened drainage system, while crowds waiting for hours at bus stops or trying to hop rides home in bumper-to-bumper traffic jams are the result of a badly overstretched transport infrastructure. Due to the incessant demand from the growing population, rent and food costs are also soaring.

When Jack Dorsey visited in late 2019, it was assumed that Twitter’s Africa office would be in Lagos, and rightly so. Other tech giants like Facebook and Google had already squeezed themselves into the labyrinthine cluster of startup offices in Yaba and Ikoyi, another wealthy suburb. Also, Nigeria’s Twitter users are probably the most engaged on the continent.

But in April 2021, Dorsey lobbed a bombshell—Twitter had opened in neighbouring Accra, Ghana.

Nigerian Information Minister Lai Mohammed blamed journalists for Dorsey’s decision. If they had done a better propaganda job, rather than constantly criticising government policies and officials, Dorsey would have opened Twitter Africa in Lagos, he said.

But Dorsey’s decision doesn’t surprise anyone who has tried to run a startup here, particularly foreign investors, says Abdulhamid Hassan, co-founder of fintech startup Mono. His company joined top accelerator Y Combinator this year. Hassan, who has piloted startups in France and Dubai, says he would have done the same. Running a company in Nigeria is a difficult task, but in Lagos, those difficulties are magnified. The electricity is unstable, rent and internet are expensive, and then there’s the legendary productivity-thieving traffic, he adds.

Besides the infrastructural problems, policy after self-sabotaging policy has sent many investors packing from Lagos. Last year, a ban on the popular motorcycles and tricycles that emerged as a way to fill the transportation gap was imposed, grounding ride-hailing startups like Oride, which had helped people navigate the city’s traffic jams at the tap of a button. Gokada and MAX, also ride-hailing businesses, only survived because they managed to pivot sharply to logistics.

In contrast, Accra, the hip city that has marketed itself as an abode for African Americans, has more stable electricity and a friendlier investor environment.

Perhaps Lagos’ biggest struggle over the last decade is adapting to the transforming nature of work, which sees more young people opt for jobs in tech, an industry with a more casual culture that has largely left behind the suits and ties of oil companies and banks. Nigeria’s casually dressed young are often harassed by SARS, the police unit notorious for profiling anyone sporting dreads or tattoos as a “Yahoo Boy” (online scammer). Meanwhile, although the state recently created a startup fund, it has yet to build adequate public infrastructure dedicated to those budding innovators. That disconnect contributed to the outpouring of rage last October in the EndSARS protests, fuelled mainly by the anger of young Nigerians who had had enough of being targets of police violence.

Unfortunately, the EndSARS protests, pulsating with long-repressed anger amplified by the effects of the Covid-19 lockdowns, were cut short by violent security force crackdowns on crowds that mostly retreated in fear. These crackdowns were then followed by further state violence—the most vicious I had seen in my 11 years in Lagos.

I first moved to this urban jungle for college as a wide-eyed teenager, scared but comforted that it was no longer the dungeon it used to be. Back in the 90s, when Lagos was a stronghold for the opposition political party and received little investment from the central government,
it was anarchical, lorded over by thugs and teeming with criminals. Things turned around after Babatunde Fashola, a no-nonsense attorney, became governor in 2007, and deployed task forces that swept thugs into corners and put residents in line. The Lagos of the past, many thought, was long buried. In October 2020, it reared its head again.

For the city’s youth, however, the sense of threat never really went away —it’s always been there. Olaoluwa Oluro, a Lagos developer, does not leave his apartment unless he has to. His housing unit has WiFi, and he’s subscribed to Eden, a food delivery, house cleaning and laundry service. Life is good until he steps out of his apartment. There, he gets caught up in Lagos’ notorious traffic jams, making him an even easier target for both thieves and the police.

So, Oluro stays home, hiding. He describes trips outside his apartment this way:
You remain in your bubble and you enjoy that, but when you step out of it, you realize you are still in a broken society. And if all your senses aren’t turned on, o ti sun, as Lagosians put it: You’re asleep and you’re already in trouble.