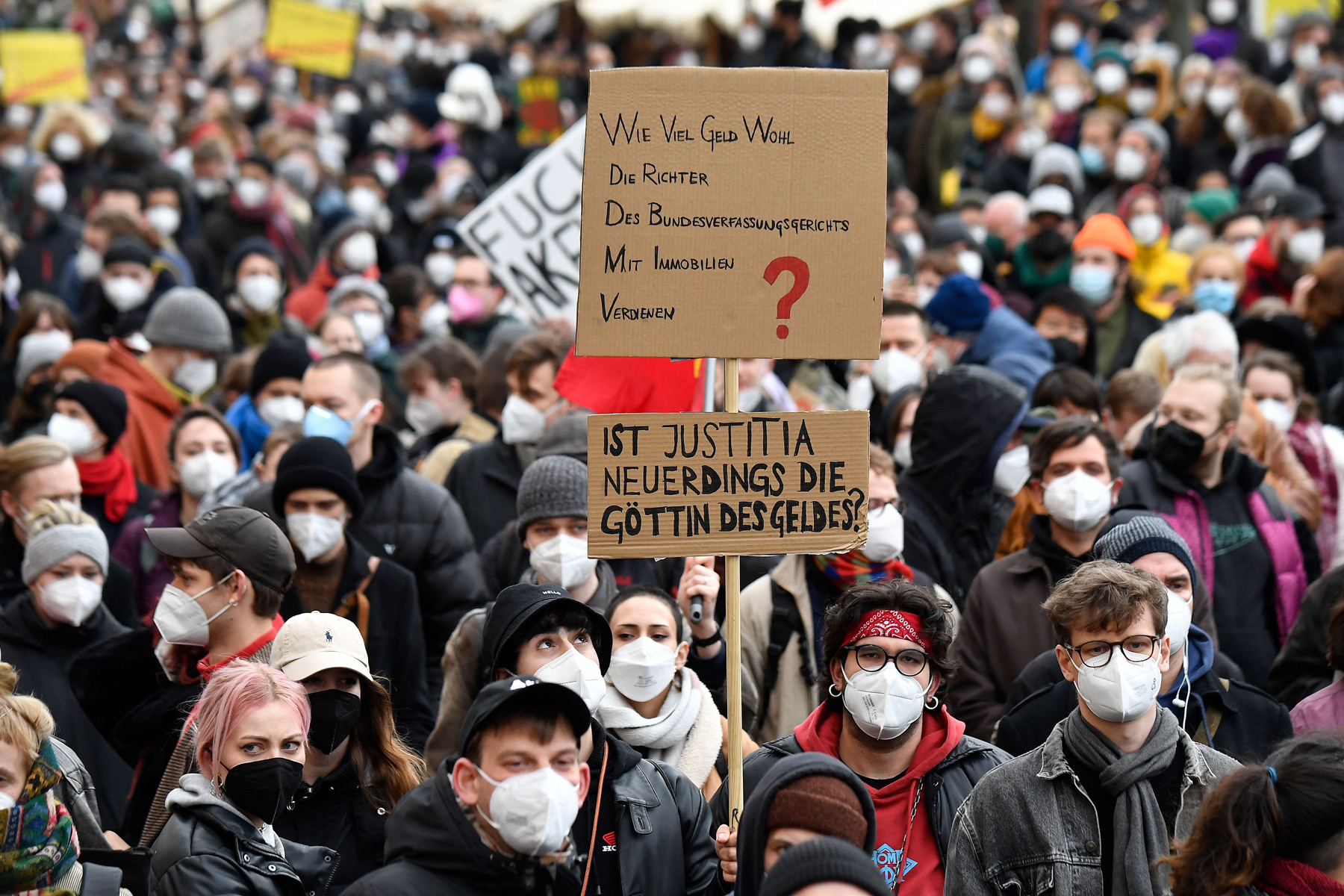 Protestors march against the the Federal Constitutional Court’s ruling that Berlin’s rent cap law “violates the Basic Law and is thus ruled void” on April 15, 2021. The ruling was a blow to millions of tenants. Photo by Tobias SCHWARZ / AFP) (Photo by TOBIAS SCHWARZ/AFP via Getty Images

Since 4am, a tide of black-clad protestors—some wearing scarves to hide their faces—had been washing in and out over the Schillerplatz, a tree-lined square in one of Berlin’s hippest neighbourhoods. Lines of helmet-clad police followed in their wake. Locals watched from the sidelines as 500 to 800 anti-gentrification protestors lit fireworks, held speeches, threw bottles and stones, and were pepper sprayed in return, by the around 700 police present. The cause of this central city riot on that late summer’s day in 2020? The closure of Syndikat, the bar-cum-left-wing collective that had operated down the road since before the fall of the Berlin Wall.

The 35-year-old bar had just lost a long, legal battle to renew their lease, now held by new owners, a family of British billionaires that had invested heavily in Berlin real estate. Syndikat’s eviction from its premises at Weisestrasse 56 had catapulted the bar and its supporters onto the frontlines of a bigger fight that, while on the face of it appears to be about rising rents, gentrification and newly arrived real estate moguls, is in fact at core about the relationship between a city and its real estate market.

Unlike other big cities in Europe, Berlin’s market was underdeveloped because of its Cold War history. Over the past decade, affordable central city property has attracted investors of all kinds—from pension funds looking for sensible, long-term deals to international asset managers out to make a quick buck—making Berlin’s real estate market the fastest growing in Europe. Real estate consultants Knight Frank noted that property prices increased 20.5% in 2017 alone,

the biggest rise in any major city in the world. As a result, housing has become a source of profit in a city once known for its reasonable rents and dynamic fringe culture. This shift also caused steep rent hikes, a serious issue in a city where few residents own their homes, and where the average salary remains low compared to other parts of the country. In other words, gentrification was becoming a problem, neighbourhoods were changing too rapidly, and people—and bars—were being pushed out of areas they had for decades called home.

Enter Berlin’s controversial new “rent cap” or, in German, the Mietendeckel. The city already had some rent controls, but they were generally perceived as ineffective. This is what led to Berlin’s left-leaning city authorities imposing the 2020 rent cap.

Officially called the “Act Limiting Housing Rents in Berlin”, Berlin’s rent cap was passed in January 2020 to a loud chorus of both indignation and joy. Pegging rents in the capital to those from June 2019, the cap prohibited rents from exceeding what they had been at that time. Berlin’s cap bestowed unique power on tenants, making it possible to alter existing contracts retrospectively, and putting the state between tenant and landlord. Additionally, if a rental apartment changed hands, landlords could not charge more than the previous renter was paying. Finally, if rent exceeded the cap’s threshold, a tenant could petition to have it lowered. (These conditions did not apply to Syndikat, which held a commercial lease.) In essence the cap was intended to give Berlin’s strained property market five years’ time “to relax”, as Berlin’s senator for building Sebastian Scheel said, after which it would lapse, in 2025.

While rent caps are not new (other cities including San Francisco, Stockholm, New York, Paris and Copenhagen have introduced them over the years with varying results), Berlin’s cap was unique in the power it gave tenants, who, in Berlin, compose 85% of all residents.

Property prices increased 20.5% in 2017 alone, the biggest rise in any major city in the world. As a result, housing has become a source of profit in a city once known for its reasonable rents and dynamic fringe culture

To some, a cap like this was the sensible and ethical thing to do. The rent cap had the potential to “mount a serious challenge to the current speculative model of housing that benefits both huge global financial actors and smaller landlords,” Siobhan Donnachie, a Berlin resident and coordinator at Greater Manchester Housing Action in the UK, wrote in December 2020.

But the measure has also been described as “radical”, “extreme” and “entering new legal territory” by sector analysts and international media. “No city hates its landlords like Berlin does”, a Bloomberg story about the rent cap trumpeted in early 2020.

So how exactly did Berlin get here?

The story of Berlin’s rent cap begins with the fall of the Berlin Wall in 1989. After World War II, the German capital was divided into two, with one half under Soviet rule, and the other occupied by American, British and French forces. Eventually becoming East and West Berlin, these zones remained separated by the Berlin Wall for 28 years. By the time the Wall fell, the two halves of the city were very different to one another. The West Berlin that emerged from the division has been described as a “bizarre and contradictory showcase for western democracy. The most important freedom for many of its citizens was the right to stay out all night long”. East Berlin, in contrast, was rundown and restrictive. As the Wall fell, many abandoned their state-supplied apartments to move west.

After almost a million East Germans left their half of the country between 1989 and 1990, establishing who owned the once-nationalised buildings in what had been East Berlin took time. During the resulting power and ownership vacuum, the number of vacant properties rose. Researchers say that by 1990, the city was already home to around 120 squats, mostly alternative communities that occupied the empty eastern Berlin buildings. Many of these were converted into communes, artists’ studios, music venues, unlicensed bars and clubs. They left “deep marks both on the biographies of countless squatters and on the development of affected urban neighbourhoods,” Andrej Holm, a researcher who has chronicled this period, wrote in a 2016 paper. This lasted well into the 1990s.

It is unclear how many squats remain today. Over the years, many transitioned to legally sanctioned arrangements with rental contracts in place. However, a handful of the most outspoken and colourful squats persist as arbiters of the anti-gentrification movement. In many ways, the punk philosophy upon which many of these alternative inner-city communities were founded has leaked into local attitudes that were at the heart of popular support for the city’s rent cap. Though not explicitly linked to the rent cap, the demise of Syndikat—founded before the Wall fell by residents of one of the poorest, least desirable parts of the city, and a cornerstone of Berlin’s anarchic scene—was heavy with the symbolism of the city’s recent changes.

Back at the pre-rent cap turn-of-the-millennium, however, Berlin’s city government was almost bankrupt. In response, the city put what would amount to around 200,000 apartments on the market between 1997 and 2004. This sell-off of municipal housing stock saw the first large international investors arrive on the scene. Despite Berlin’s location in central Europe, prices remained static for nearly a decade—in 2010, Scandinavian investors were still buying up whole apartment blocks for around a million euros.

But the German capital’s consistent presence at the top of “coolest cities in the world” lists, and the fact that inner city rents were low compared to other European cities continued to add to Berlin’s popularity and population. It was only a matter of time before more big investors and pension and equity funds started investing in Berlin. In neglected central city neighbourhoods, this trend caused property prices to rise steeply (in Neukoelln, prices increased from an average of €862 per square metre in 2009, to €3,568 in 2019.

Rents rose accordingly. For example, in Schillerkiez—the Neukoelln neighbourhood where Syndikat was located and where the riot took place—rents rocketed 89%, on average, between 2009 and 2015 according to local newspaper surveys.

Thus on that August day in 2020, protestors were not just upset about rising rents. They were also outraged about who was profiting. The Pears, the British billionaire family that purchased Weisestrasse 56, own over 3,000 apartments in Berlin—mostly through shell companies—and are thought to be worth almost €4 billion. In 2019, investigative journalists discovered that the Luxembourg-registered shell company that now owned Syndikat’s building had reported losses in 2017, and as a result, only paid the city of Berlin around €535 in taxes that year.

As the protesters were quick to point out over their megaphones that summer evening, Berlin’s taxpayers were essentially subsidising police protection of the foreign billionaires’ property.