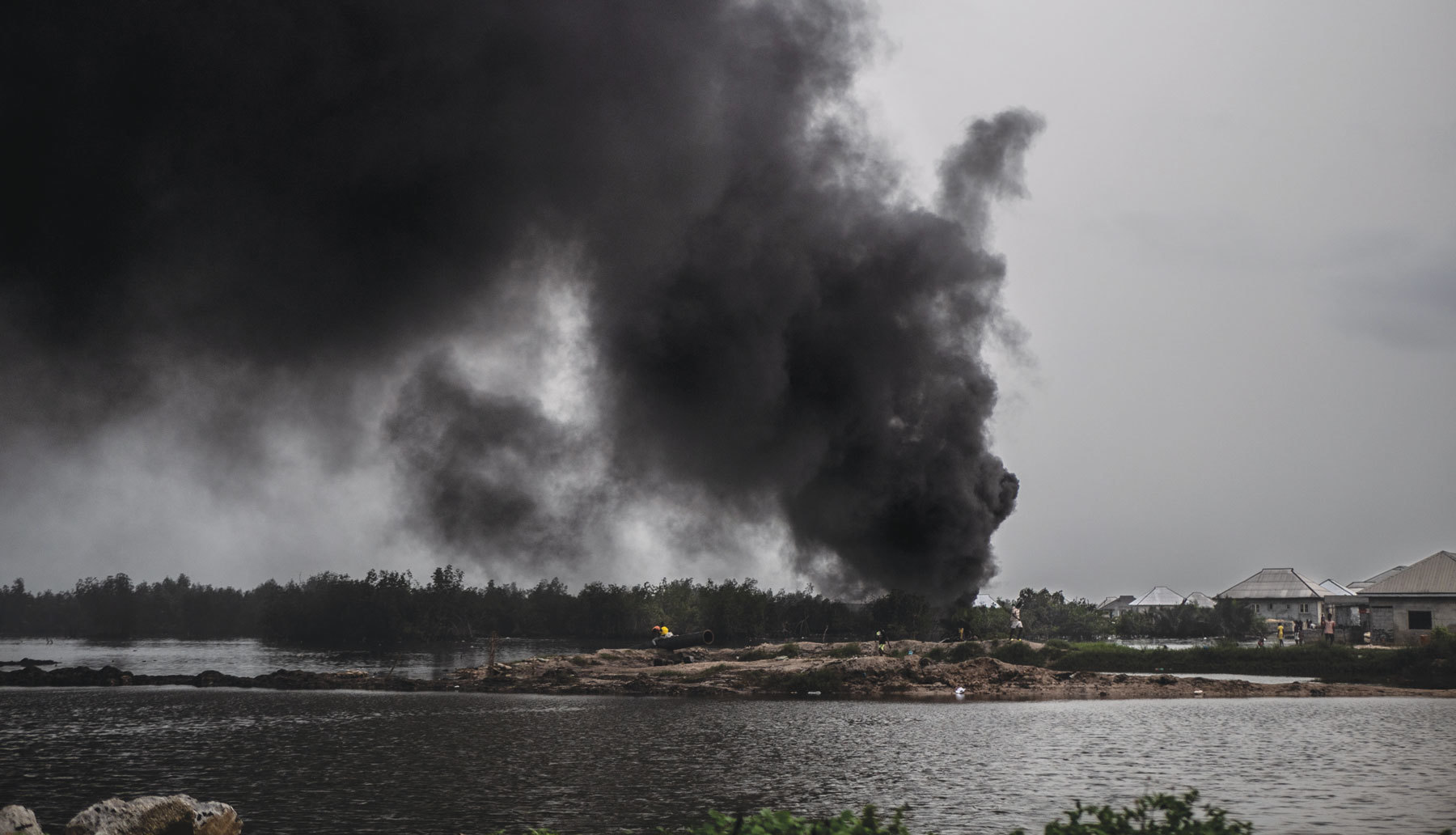 A burning barge in the Ibeto/Bundu Creek. It was set alight by a Joint Task Force army patrol. Such fires are common in the creeks surrounding the city. Photo: Isaac Harry © 2021 CMAP

An air of dark carnival hangs over the city. Streets mostly empty but for a sense of suppressed agitation. At Creek Road Market barefoot kids play football by the bus stop on an otherwise empty strip. No street-sellers with barrows of carrots or sugar cane; no plantain or suya roasting on corners; no clack-clack of the travelling tailor’s oversized cast-iron scissors. Occasionally a battered police truck rolls by, the officers heaped in the back with red cloth juju charms tied to the sights of their rifles and dusty surgical masks over their mouths; their trousers shiny with starch, their berets stained with sweat-salt. At Six Field polling station, soldiers, police, election officials and nervous National Youth Corp volunteers outnumber voters who stand in small, anxious knots on the sandy field.

The church on the corner of the block is full, though, and full-throated.

On Aba Road: pyres of tires; tin barrels full of poured cement, painted blue, yellow and green; sandbags stacked around temporary machine gun encampments; armoured personnel carriers narrowing the drag from four lanes to two for a few hundred yards either side of the election commission office. Traffic lights continue their procession of phased irrelevance as soldiers wave the odd vehicle by.

Men in parlours, women on verandas lean into their radios as the lists of those taken in midnight raids are read out: the local government chairman’s wife and their young son; the former special advisor to the governor on these or those affairs; the dog of this or that former warlord shot dead when his master’s house was raided.

It is Saturday, 9 March 2019: state election day in Port Harcourt. An exercise of national mobilisation that will be attended by a lockdown and curfew. Here, the get-out-and-vote is shut-up-and-stay-home.

Sunday, the day after: activity again along the streets. The traffic touts are out with their rubber hoses and broken chair legs in hand, herding the taxis into the verge, pushing a few crumpled notes into their pockets, shouting destinations and the number of spaces left in each vehicle, cramming in the passengers. We drive past the PDP state party headquarters en route to Presidential Hotel and past a 25-foot cut-out of Ezenwo Nyesom Wike, smiling, striding. He was the governor yesterday. We presume he will be the governor tomorrow.

Monday, the day after the day after: election proceedings are suspended. No counting, no results. Police and army, aligned with the state government and federal government respectively, in pitched battles over occupation of the state Independent Electoral Commission office. This is a violent shadow fight, because Wike’s main opponent, Tonye Cole, is no longer on the ballot. The drag that had been narrowed is now completely barricaded with trucks and tanks—the main road through town. A hundred yards either side of the barricades, street hawkers taking advantage of the thickened traffic make offers to captive drivers and passengers: shaving mirrors and bibles, chilled water in sachets, doormats, DVDs, South African grapes, apples and pears, replacement windscreen wipers and steering wheel covers, crispy fried plantains sliced thin and wrapped in cellophane, cell-phone chargers, half-dozen packs of socks and cotton vests bundled with free pens, a pyramid of groundnuts on an enamelled tray balanced on a coiled cloth on a young girl’s head, motivational books on management and marriage, kids squirting soapy water onto windows before wiping them down and tapping till they get some notes.

Tonye Cole, son of a former Nigerian ambassador and CEO of Sahara Oil, had hoped to run against Wike for the governorship. Had party in-fighting and a Supreme Court ruling not forced him from the ticket, he might have won. From his office in Government House, he could have looked out over Sahara Oil’s new facility, built on land that was once home to 20,000 people. Thanks to a private-public partnership brokered by Rotimi Amaechi, governor at the time, the Abonnema Wharf settlement was demolished in July 2012. I photographed the clouds of asbestos dust that filled the air that day until the rain came down on those without a roof.

Now, a monorail runs between what might have been Tonye Cole’s window and his tank farm. The deeply piled concrete columns have already started to culture mould. Nothing runs on the track, which finishes, abruptly, not far from where it starts. The author of that $400 million project, former state governor Amaechi, is now the federal minister of transport. It is he who chose Tonye Cole to run against Ezenwo Nyesom Wike. After the ruling which barred Amaechi’s protégé from finally challenging Wike, the contest spilled onto the streets.

The air we breathe here already attacks the lungs. Each night, out towards the creeks, thick columns of smoke rise up from the local refineries, bases stained orange by furnaces, a darker black higher up against the pitch-black sky

The election is a chaos machine fashioned precisely to generate ungovernability. Though the machines are imperfect, they serve the street traders on either side of the barricades well.

Early last year I read that Tonye Cole had gone into self-isolation after learning that the BA flight he took from London had brought the third known case of Covid-19 into Africa’s largest city. Now all the stories are about the virus that attacks your lungs.

But the air we breathe here already attacks the lungs. Each night, out towards the creeks, thick columns of smoke rise up from the local refineries, bases stained orange by furnaces, a darker black higher up against the pitch-black sky. Artisanal refineries start up after sundown. More every night. Joint Task Force patrols set the barges of stolen oil alight, or burn the lashed-together contraptions that cook the crude—that is, unless they are paid enough by the artisanal refiners.

Every night the pall from the creeks spreads over the city and settles. And every morning people light kerosene stoves with product gleaned from the creeks, start up diesel trucks whose patched-together tanks are filled with creek product. That soot settles on everything, even the light.

Brecht wrote, “Of those cities will remain what passed through them, the wind!”. This virus has brought the fear and fascination of empty cities. Not empty with the ruin of war or earthquake. Not ancient cities whose streets have been unpeopled for millennia. Not, actually, cities without people. Rather cities in which all the people are inside.