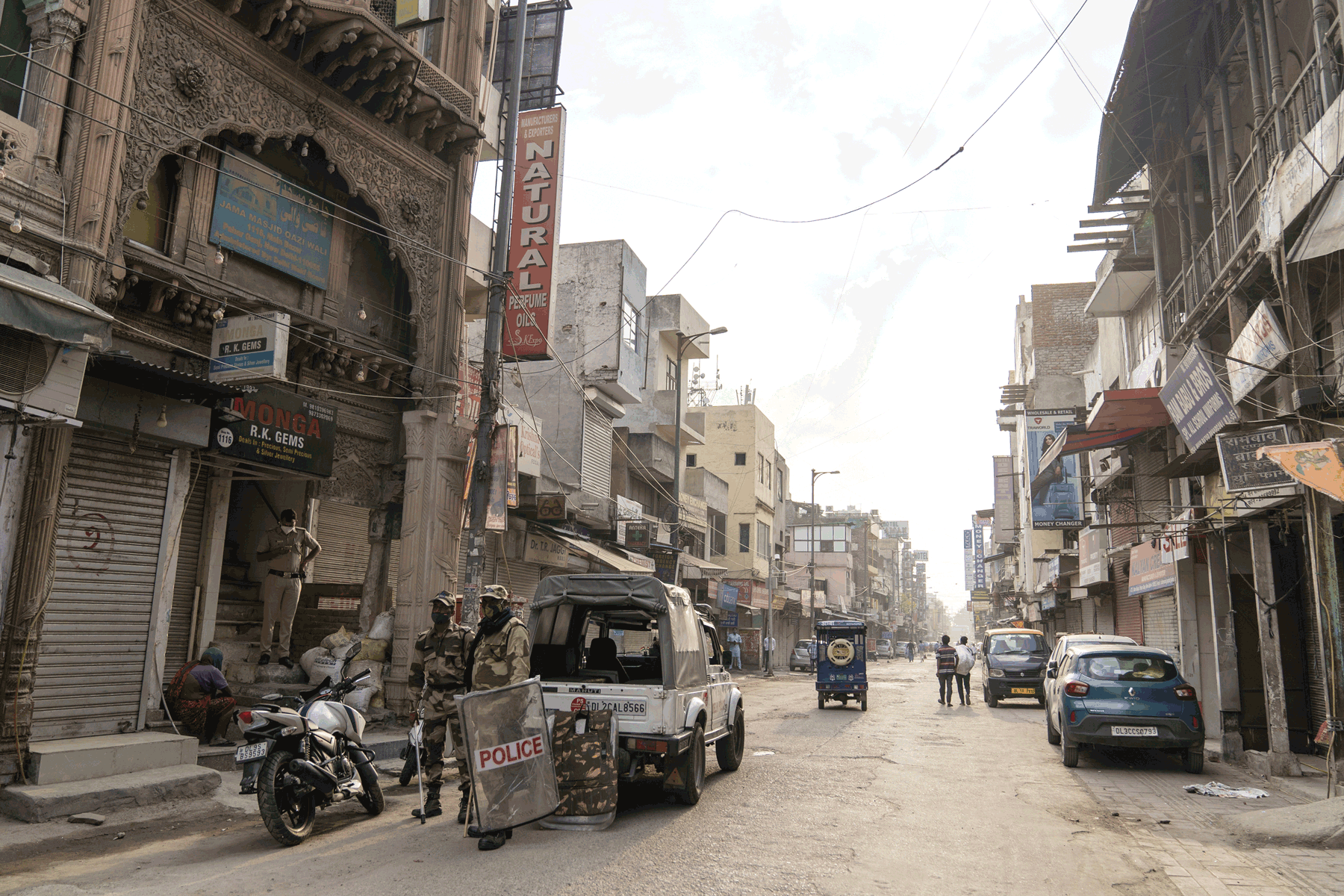 Police officers stand guard outside a mosque during lockdown restrictions imposed by the state government in the Paharganj area of New Delhi. Photo by Sumit Dayal/Bloomberg via Getty Images

“I paid all my kishts (instalments) on time,” Sohanlal Paswan*, a resident of a squatter settlement in New Delhi, said despondently last October. Having successfully made 13 monthly payments for an e-rickshaw vehicle he had purchased in early 2019, he was two payments short when the Prime Minister declared India’s initial 21-day nationwide lockdown on March 24, 2020. Sohanlal, unable to work, could not keep up.

Buying the rickshaw was a dream for Sohanlal and his wife, Kajal*, both originally from the northern Indian state of Uttar Pradesh. He had purchased the e-rickshaw for over INR100,000 / £1,000 — an amount beyond what he could afford—through a private finance company. In spite of the loan’s high interest rates and extortionist structure, the e-rickshaw meant that Kajal and Sohanlal could, for the first time, begin to imagine a more stable future for their family. Providing him entry into the large pool of informal transport workers across the city, the e-rickshaw meant he no longer needed to be a waste-picker. But after 13 months of hard work and diligent loan payments, “Lockdown lag gaya!” (lockdown happened).

Since late March 2020, India has introduced a series of badly planned and poorly managed national lockdowns. The initial 21-day announcement of the nationwide lockdown led to a massive exodus of people from big cities like Delhi, where mobility became highly restricted. Tens of thousands of migrant workers—primarily day-labourers and their families—left the city to return to their home districts across India, effectively emptying Delhi’s squatter settlements. In Sohanlal’s settlement, half the residents fled for homes in Bihar and Uttar Pradesh. Kajal and Sohanlal, however, decided to stay.

“We could not have left our e-rickshaw here, and neither could we have taken it with us to our village,” Sohanlal says.

The e-rickshaw was their treasure, but its safety also became a burden. As Delhi shut down, Sohanlal’s daily earnings vanished. Initially, he did not take his e-rickshaw out on the road, unwilling to risk getting infected and afraid of his vehicle getting impounded or receiving a beating from patrolling police. In multiple videos that popped up online, uniformed officers were seen abusing people out on the road during curfew.

Another challenge Sohanlal faced was parking. Before the pandemic, he parked in a garage close to home for overnight charging. But no longer able to afford the daily fee of INR50 / £0.5, he was forced to leave his rickshaw parked in a nearby open area, secured with additional chains and locks. This contributed to the next big blow. After two months of lockdown, the e-rickshaw’s battery—which cost INR30,000 / £300 to replace—was damaged beyond recovery.

The rickshaw has remained parked since.

Back where he started, Sohanlal is again recovering recyclables from the city’s waste. He now also carries additional debt from the e-rickshaw loan, the compound interest from which continues to increase.

Sohanlal’s experience is symptomatic of how the lockdown affected informal transport sector workers across India’s other big cities. The government’s INR5,000 / £50 onetime financial assistance package for drivers of public service vehicles (e.g., autos, taxis, and e-rickshaws) was inaccessible to Sohanlal, who lacked the permanent driving licence required to access the funds.

“There are so many fees and people whom I need to pay for these things...” he explained, adding that he had been driving the e-rickshaw on his learner’s licence, and planned to apply for his permanent licence once he had paid off the e-rickshaw loan.

As India deals with the latest, devastating spike in Covid-19 infections, Sohanlal and many others like him are being pulled further into financial distress. According to recent estimates by the Pew Research Centre, an additional 75 million people across India have fallen into poverty in the year since the first lockdown in March 2020.

The virus continues to impact people’s lives in complex ways yet to be reckoned with or understood. The upward economic mobility Sohanlal and Kajal briefly enjoyed from owning and operating an e-rickshaw is facing its own extended lockdown. For the Paswans, a deadly confluence of the government’s mishandling of the lockdowns, police heavy-handedness in enforcing restrictions, and mounting debt liabilities have stalled their aspirations. The pandemic has reconfigured their life in a city they came to with hopes of improvement. Like millions of poor and working-class people across India’s urban landscape, they are experiencing a lockdown that goes beyond that sanctioned by the state.

Discouraged by returning to working as a waste picker, Sohanlal started to question the threat and even existence of Covid-19.
“If there is Coronavirus in the city, then let me also see if touching the waste will give me it,” he said.