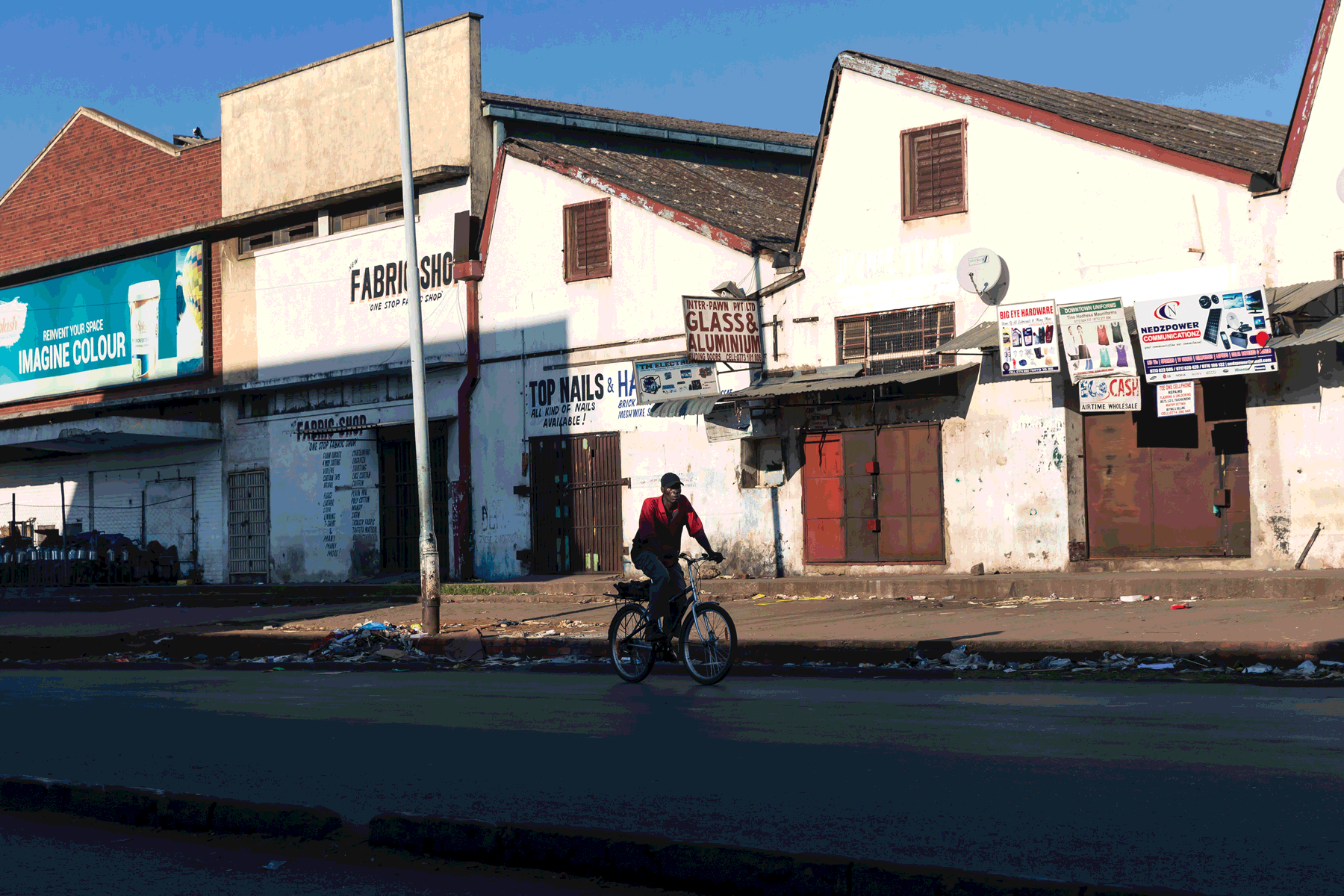 A lone cyclist rides through a normally bustling part of downtown Harare during one of the mandatory 21-day lockdown lockdowns that have crippled the city. Photo by Jekesai Njikizana / AFP

The jacaranda-lined streets of The Avenues precinct have long served as a buffer between Harare’s working-class centre and its affluent suburbs to the west and north. In recent times, however, The Avenue’s once-prim streets have become home to informal vendors, flocking from other parts of the city to sell mobile-data vouchers, fruit and vegetables.

This should come as no surprise, given the government’s 2017 revelation that almost 90% of Zimbabweans now work in the informal economy—a reality directly connected to the country’s economic freefall since the 14th November 1997, when the Zim dollar crashed thanks to a perfect storm of mismanaged War Veterans’ disbursements, the DRC War and Land Invasions. The decline of the country’s economy has long forced citizens to make their own way, often through activities like informal trading, despite vending long being illegal in undesignated zones. More recently, the Harare City Council has doubled down on vendors, who have proliferated since another round of economic malaise, post the 2013 end of the coalition government between Mugabe’s ZANU-PF and the opposition Movement for Democratic Change.

Chamu Mapfumo (not his real name) is one of this army of vendors. On a typical day, Chamu travels the 15 km separating Highfields—Harare’s second-oldest, high-density suburb—and The Avenues. From his corner along Second Street, he sells mobile data to passing pedestrians and vehicles.

However, since the world plunged into a rolling series of lockdowns to curb the spread of Covid-19, Chamu’s days have lost any predictability. What used to be routine brushes with the city council over bylaw infractions have heightened into daily battles for survival, as Zimbabwe’s government, like many, seized the pandemic as an opportunity to introduce new mechanisms to control the informal economy.

In April 2020, the Harare City Council demolished the makeshift vending cabins across the city where vendors like Chamu used to ply their trade. Further complicating daily life for Chamu, 16-seater commuter omnibus taxis—the primary mode of public transport for thousands—were banned from operating. This ban was a particular show of force by the government against taxi operators whose power to bring the city to a standstill is a sore point for the state. (That said, the last such protest against fuel price increases in January of 2019 were ultimately unsuccessful, and resulted in the state’s brutal retaliation.)

As the hard lockdown took its toll, Chamu had to find alternative, often sneaky ways to enter the city. ZUPCO, a perennially mismanaged state-owned bus service, wasn’t an option. Besides the service being woefully unreliable and insufficient, buses, when they do show up, are often overloaded with passengers, violating the government’s Covid-19 social distancing measures.

Despite the aforementioned ban, some commuter taxis remained in operation, doing what they could to evade police checks, sometimes resorting to unsafe bush roads. Often running into police roadblocks, Chamu and other passengers found themselves forced to disembark the vehicle they were travelling in and flee, fearing arrest.

Indeed, the police have kept busy. A few weeks after the nationwide lockdown began in early January, a spike in Covid-19 infections by mid-February saw the police arresting 400,000 people for violating Covid-related regulations. None of this has stopped vendors from continuing to venture out and set up along streets and corners in an attempt to earn an income.

At the beginning of the lockdown, Chamu himself fell afoul of regulations. “I wanted to buy food to take back home. The next thing I know, I have been arrested by the police,” he said.

“Plenty of us were arrested, and many could not afford to pay the fine.”

After those who could pay the fines were released, the police, in an unsurprising turn, asked Chamu and those remaining to give them whatever money they had before letting them go. Incidents like this are all too common in Harare, where policing carries a history of brutality and corruption, especially in the high-density townships surrounding city centre.

While daytime traffic in The Avenues remained constant during the various lockdowns, the bars and restaurants for which the area is famous have been shut. Ironically, night-time activity across the district now plays out around the many medical facilities—the clinics, doctors chambers, and pharmacies—concentrated in the area.

Things do seem to be changing, though, and Harare is starting to open up. In March 2021, the government announced an end to the hard lockdown. It also has launched what for now appears a promising vaccination programme. A supply agreement with

the Chinese government resulted in Zimbabwe receiving enough vaccines to deliver a mass vaccination programme—one of the first on the African continent—and vaccination centres are popping up around the city.

Meanwhile, for Chamu and many others, it’s back to The Avenues. Vaccines notwithstanding, the government’s promised “Cushion Fund”—meant to provide financial assistance to informal traders—never emerged, while persecution of informal vendors never relented. For now, Chamu’s only hope is to maintain his spot on Second Street, prepared for uncertain encounters with hostile city officials.