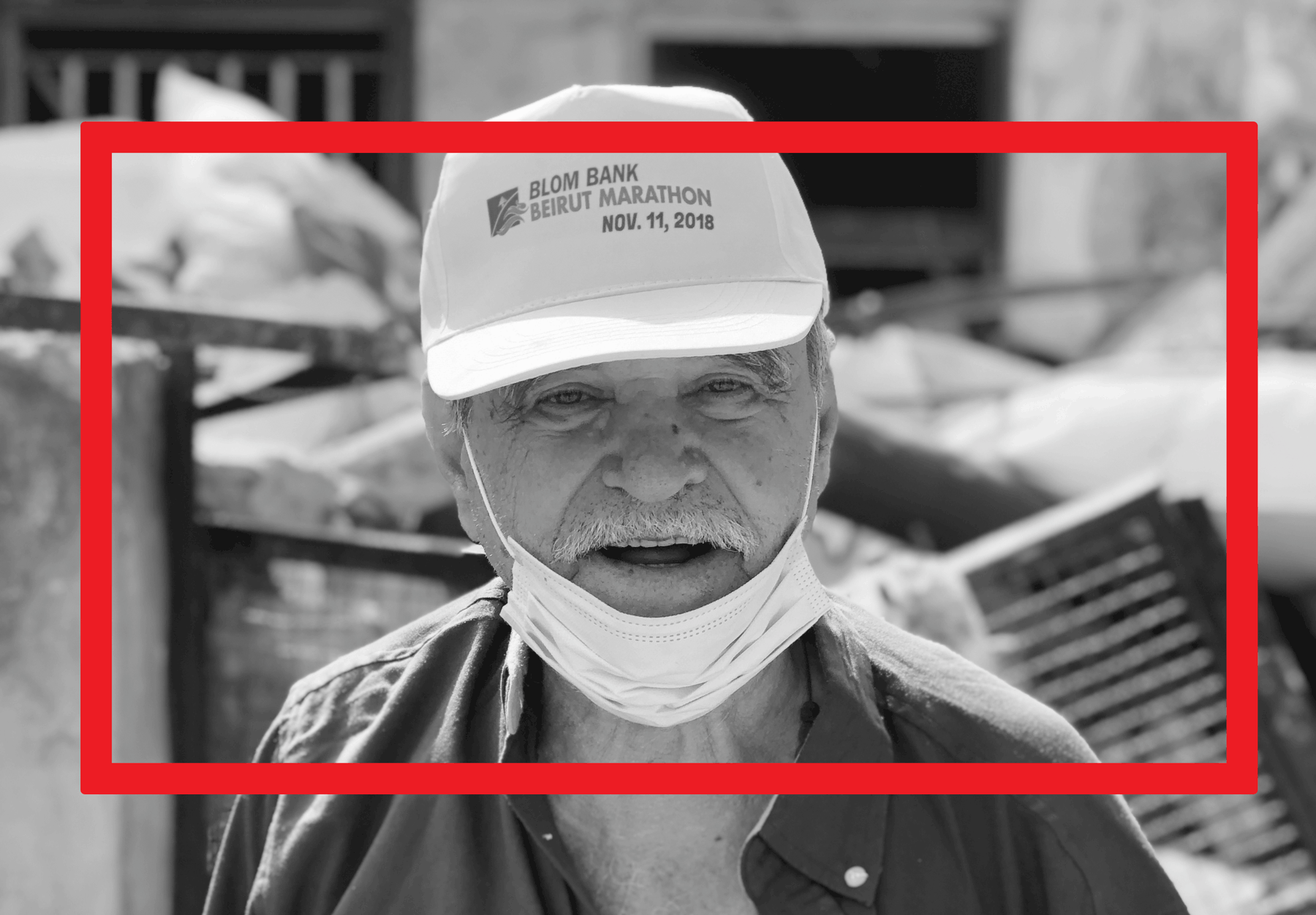 Elie Halabi. Photo by the author

Journalist Zahra Hankir fortuitously met with Elie Halabi days after the devastating Beirut blast in August 2020. This is the story of their friendship

The edges of Lebanese identity papers, pinned by rubble, fluttered like butterfly wings in the wind. Beirut, that early-August afternoon, was unrecognizable—its buildings now shells comprising shattered windows, collapsed ceilings, broken pipes and mangled metal. Rays of the day’s last sunlight bounced off mounds of glittering, shattered glass and onto the weary faces of the city’s survivors. Among those faces was that of a small, silver-haired man. Sitting on a flimsy plastic chair, his sunken eyes looked out over a mask, from behind which I sensed he was smiling at me. A trickle of blood escaped a dressing on his arm that kept slipping as he waved clumsily. “Welcome, come join me! But keep a distance—I don’t want you to get corona!” said the man I would come to know as Elie.

I arrived in Beirut from London on August 7, just three days after one of the world’s largest non-nuclear explosions battered the Lebanese capital. Despite port officials’ repeated warnings to the government, a stash of 2,750 tons of ammonium nitrate had sat unsecured for six years. The blast took place in a city already reeling from Covid-19. A spike in cases had led to restrictions on businesses that compounded an existing economic crisis rooted in government corruption. Over half the population was living in poverty.

The pandemic also had thrown my life off course, albeit in far less seismic ways. I was in the midst of relocating to New York for work when the US had halted immigration. Having already left my London apartment, I decided to temporarily move back in with my parents in South Lebanon. My mother and father, like many Lebanese, had felt the blast at the city’s port as a cruel culmination of the state’s neglect. With their country seemingly crumbling around them, I thought I could offer them support as I waited out my situation.

Upon arrival to Beirut, I quarantined at a hotel as per Covid-19 restrictions. Pushing through the plastic sheets that replaced the hotel’s blown out foyer, I took to the streets in desperate search of something, anything, to do.

Scanning relief efforts, I had joined a dozen teenagers, some of whom were 20 years my junior, to sweep debris at a primary school not far from the blast site. Filled with optimism and energy, the volunteers flirted and cracked jokes as they packed food boxes for the homeless and painstakingly picked shards of glass from soil and cork boards. But all I saw was the school’s eerily empty halls. A large Lebanese flag partially draped over a chalkboard revealed scrawlings from an arrested French lesson; a speaker lay where it had fallen from the walls and split into two; a clock was stuck at 6:07 p.m.—the precise moment of the explosion. Silently sweeping the endless debris, my own sense of uselessness enveloped me: how could anything I do possibly make a difference in a calamity so tremendous?

The following day, I ditched the teens, deciding instead to walk neighbourhoods pulverized by the explosion. Glass crunching underfoot with each step, I passed aid workers roaming rubble-filled streets strewn with bedsheets, stuffed toys, novels and once-framed family photos: fragments of lives lost or forever changed.

I was searching for people to interview when I stumbled upon Elie. I was unsure about whom to approach, sensitive to intruding on a grieving and aggrieved community. The explosion had left some 200 people dead, thousands injured and hundreds of thousands homeless, and here I was, a journalist in pursuit of quotes. But, sitting alone, Elie seemed also to be searching for someone to speak to.

He would pull up a chair and speak to the young men who hung out there. It didn’t matter whom he talked to, really. He just wanted to be around someone, anyone

Dressed in a loose, olive green shirt exposing a white undervest, and creased oversized trousers, the somewhat grizzled man fingered wooden rosary beads. He had a soft voice and a gentle demeanour, and greeted passers-by by their first names, asking how they were faring in the blast’s aftermath.

Introducing myself as a reporter, I reluctantly asked for permission to photograph him. To my surprise, the 62-year-old man’s eyes lit up, grateful for the attention.

“Should I take my mask off, and should I put this cap on? Do I look older with or without it?” he asked. With frail fingers, he styled his rakish moustache and flattened some stray hairs before posing.

But even as he chuckled shyly, asking how his hair looked, his eyes crept towards the rubble, darting around, before resting on a damaged coffee table. Covered with a tatty floral tablecloth, the broken piece of furniture was, I realized, a kind of shrine, bearing a plant, framed pictures of Jesus and Mary, a photo of an elderly woman decorated with pearl and gold rosary beads—and a death notice.

Within moments, the man’s smile turned to tears. “Can I tell you my story, my daughter?” Elie asked.

“This was my home, my kingdom,” he began, gesturing to the skeleton of the three-story building behind him. He then recounted for me the events of August 4.