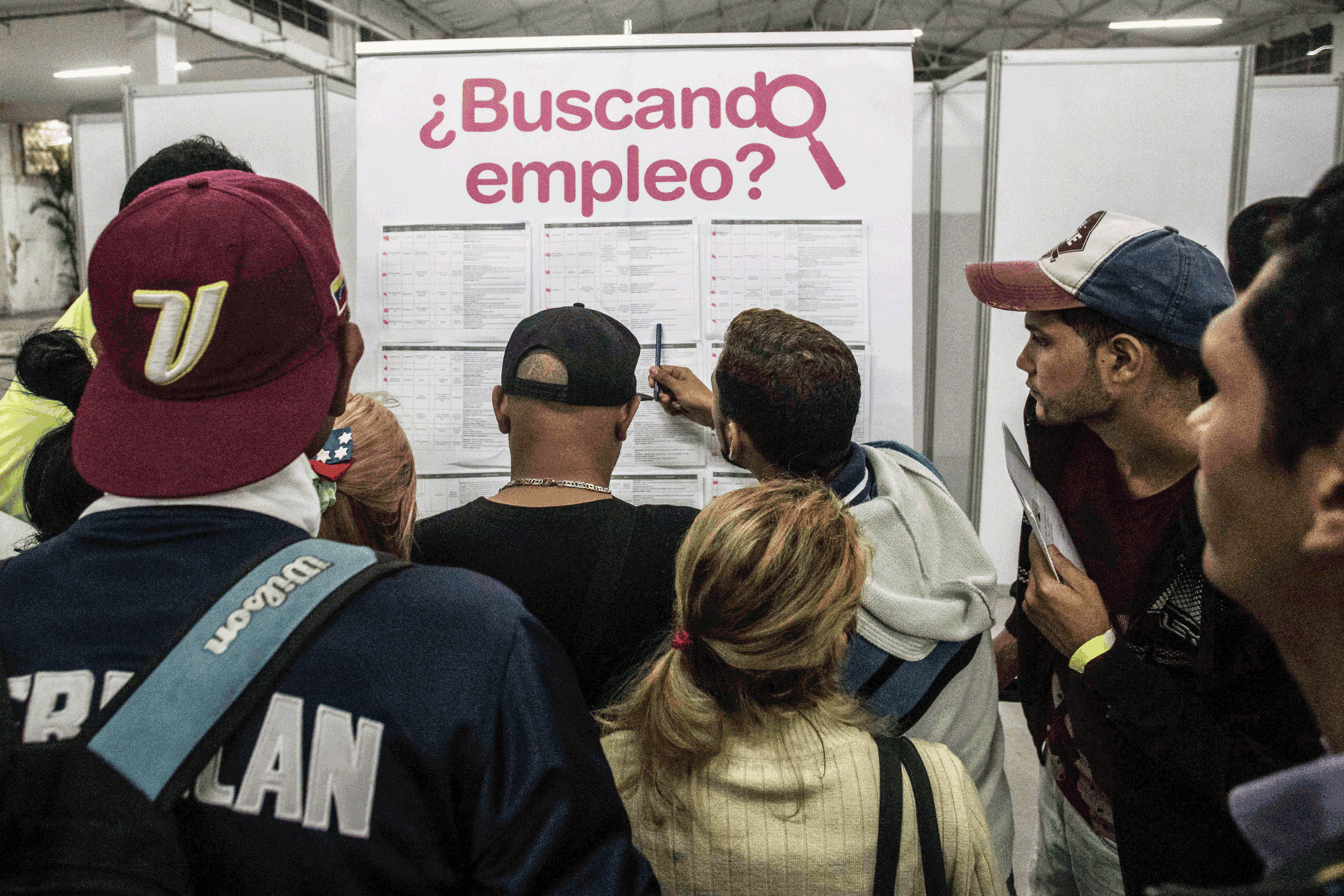 Migrants look at job offers posted on a board, during the second Job Fair for Venezuelans living in Medellín. Photo by JOAQUIN SARMIENTO/AFP via Getty Images

Immigration reforms aimed at addressing the tide of Venezuelan refugees are met with suspicion. Are they a genuine humanitarian gesture or the political manoeuvers of an unpopular president?

Two years ago on a bus in Medellín, a man walked down the aisle, flashing a thick wad of Venezuelan Bolívares, and giving the banknotes away to fellow passengers. “The banknote I just gave you does not have a value,” he declared, explaining that the currency was worth “whatever you want to give me in exchange.” When he added that the big wad of notes would get you just a few eggs back in Venezuela, I was as shocked as I was doubtful. It would take another year before I understood just how badly hyperinflation in Venezuela had devalued the currency.

Venezuela’s economic collapse and subsequent currency devaluation led to 20% of the country’s almost 29 million people fleeing its borders. One third are in Colombia, a country whose civil war has, since 1964, left more than 250,000 dead and internally displaced some 8.3 million people. The long-running armed conflict—between Colombian government troops, revolutionary armed rebels (guerrillas), and, since the 1990s, paramilitary groups—has also led to a rural exodus resulting in 84.5% of Colombia’s population now being urban.

The internally displaced make up one in five of Medellín’s residents today, in addition to which, official reports now count over 87,000 Venezuelan migrants. Most of the latter are undocumented, leaving them unable to access housing and essential services, including healthcare, education and certain public transportation services (e.g., Medellín’s public bicycle renting system, EnCicla, or the METRO’s reduced-fare CIVICA cards). Requiring official documentation, such services are inaccessible to migrants who enter Colombia illegally. Colombian officials describe this population lacking legal documentation as “irregular”, one of several terms with xenophobic undertones that has crept into general use across the country.

The use of such terms is unsurprising, given that the country’s right-wing President Iván Duque Márquez has publicly made numerous xenophobic statements against Venezuelan refugees. What is surprising, then, was the president’s 8 February 2021 announcement of a new Temporary Statute of Protection for Venezuelan Migrants.

Seeking to “regularise” the “irregular” Venezuelan immigrants who were already in the country as of 31 January 2020, Estatuto Temporal de Protección para migrantes Venezolanos (ETPS) was presented as a way for those migrants to obtain legal documents that would allow them to work and access education and other public services for a period of ten years, during which time they can apply for citizenship. (The Act also covers “regular” or legal migrants who arrive in Colombia between 2020 and 2022, though the rationale for that two-year window is unclear.)

While the ETPS could be seen as an encouraging about-face on the part of President Duque, on closer inspection, I have had to conclude that it is a political move intended to clean up his image. Ronal Rodríguez of the Venezuelan Observatory at the Universidad del Rosario in Bogota shares my sentiments. In a recent conversation, he explained how the Colombian government only had two options for dealing with the influx of Venezuelan migrants. Many enter the country on foot, headed for cities like Medellín and Bogota, with some continuing to other countries like Ecuador and Peru. In Rodriguez’s view, securing the 2,219 km border—a challenging terrain mostly controlled by criminal networks—is not only prohibitively expensive, but also virtually impossible. Introducing policies to integrate the Venezuelan arrivals was always the better option, he explained.

While the ETPS has gained widespread international praise, its implementation remains unclear, and there are questions around the Colombian state’s budgetary and institutional capacity to undertake a plan of this scale and nature.

To start, policymakers are concerned with the lack of reliable statistics on the number of Venezuelan migrants in the country. While the 2018 census estimated 400,000 undocumented Venezuelans in Colombia, authorities insist the number is 200,000. Questioning the methods used to gather the census data, some experts claim both figures are incorrect, counting even higher numbers.

Not unrelated to this concern is that around the speed with which the policy was introduced. With its final version released only a week after the first draft was published, little time was given for input from experts; many have complained that crucial recommendations they made never found their way into the final draft.

Additionally, some human rights advocates are worried that granting work permits to immigrants without a clear plan for employment generation might increase tensions between the Venezuelan refugees and locals. The economy was already stagnating before the pandemic, and many Colombians have lost their jobs due to Covid-19-related disruptions. Others have expressed concerns about authorities’ possible use of the personal data collected.

Meanwhile, scepticism about the President’s reasons for introducing the ETPS abounds. Since the US-educated Duque swept to power in the summer of 2018, he has done little to enforce the Havana Accords—the agreement that led to a brief peace between government forces and FARC guerrillas in 2016. So far failing to protect the human rights of demobilised former militants or other social groups, Duque has said that the terms of the Havana Accords are too lenient on FARC militants.

Time will tell whether ETPS marks a change in the government’s humanitarian commitment or, as I and others suspect, is a cunning politician’s play to gain the international recognition he craves. I just hope it does not prove as worthless as the Bolívar!